Conquering the Command Line. Understanding and Using Systemd. Like it or not, systemd is here to stay, so we might as well know what to do with it. systemd is controversial for several reasons: It's a replacement for something that a lot of Linux users don't think needs to be replaced, and the antics of the systemd developers have not won hearts and minds. 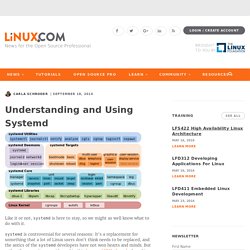 But rather the opposite, as evidenced in this famous LKML thread where Linus Torvalds banned systemd dev Kay Sievers from the Linux kernel. It's tempting to let personalities get in the way. As fun as it is to rant and rail and emit colorful epithets, it's beside the point. For lo so many years Linux was content with SysVInit and BSD init. Then came Upstart and systemd, with all kinds of convoluted addons to maintain SysVInit compatibility. . $ dpkg -L systemd-services Check out the man pages to see what all of this stuff does. Linux Performance Analysis in 60,000 Milliseconds. You login to a Linux server with a performance issue: what do you check in the first minute? 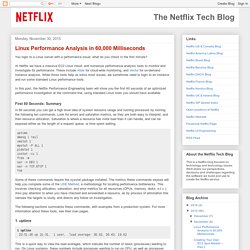 At Netflix we have a massive EC2 Linux cloud, and numerous performance analysis tools to monitor and investigate its performance. These include Atlas for cloud-wide monitoring, and Vector for on-demand instance analysis. While those tools help us solve most issues, we sometimes need to login to an instance and run some standard Linux performance tools. In this post, the Netflix Performance Engineering team will show you the first 60 seconds of an optimized performance investigation at the command line, using standard Linux tools you should have available.

In 60 seconds you can get a high level idea of system resource usage and running processes by running the following ten commands. Schedule Tasks on Linux Using Crontab. If you've got a website that's heavy on your web server, you might want to run some processes like generating thumbnails or enriching data in the background. 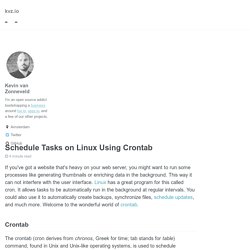 This way it can not interfere with the user interface. Linux has a great program for this called cron. It allows tasks to be automatically run in the background at regular intervals. You could also use it to automatically create backups, synchronize files, schedule updates, and much more. Welcome to the wonderful world of crontab. Named pipe. In Unix[edit] Instead of a conventional, unnamed, shell pipeline, a named pipeline makes use of the filesystem. 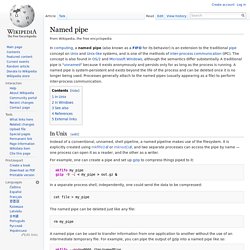 It is explicitly created using mkfifo() or mknod(), and two separate processes can access the pipe by name — one process can open it as a reader, and the other as a writer. Unix - Shell Functions. Functions enable you to break down the overall functionality of a script into smaller, logical subsections, which can then be called upon to perform their individual task when it is needed. 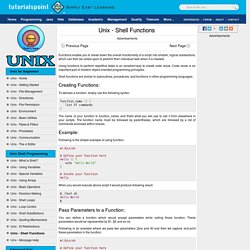 Using functions to perform repetitive tasks is an excellent way to create code reuse. Code reuse is an important part of modern object-oriented programming principles. Shell functions are similar to subroutines, procedures, and functions in other programming languages. Creating Functions: To declare a function, simply use the following syntax: function_name () { list of commands } Learn UNIX in 10 minutes. Learn UNIX in 10 minutes. 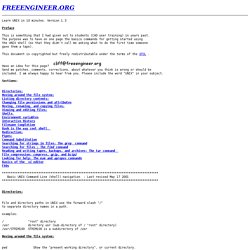 Version 1.3 Preface This is something that I had given out to students (CAD user training) in years past. The purpose was to have on one page the basics commands for getting started using the UNIX shell (so that they didn't call me asking what to do the first time someone gave them a tape). This document is copyrighted but freely redistributable under the terms of the GFDL . Shellcoding for Linux and Windows Tutorial. Shellcoding for Linux and Windows Tutorial with example windows and linux shellcode by steve premier computer security research check out: Table of Contents. 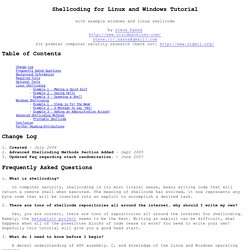 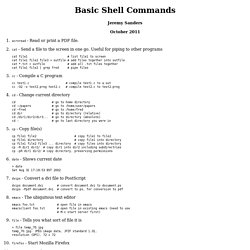 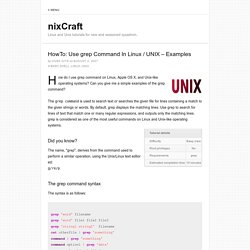 Can you give me a simple examples of the grep command? The grep command is used to search text or searches the given file for lines containing a match to the given strings or words. By default, grep displays the matching lines. Use grep to search for lines of text that match one or many regular expressions, and outputs only the matching lines. grep is considered as one of the most useful commands on Linux and Unix-like operating systems. Did you know? The name, "grep", derives from the command used to perform a similar operation, using the Unix/Linux text editor ed: g/re/p The grep command syntax The syntax is as follows: