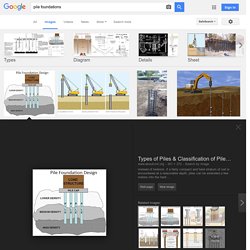 Pile foundations. Foundations provide support for structures, transferring their load to layers of soil or rock that have sufficient bearing capacity and suitable settlement characteristics. 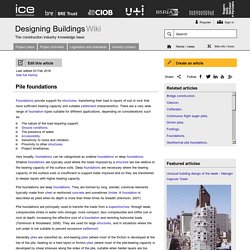 There are a very wide range of foundation types suitable for different applications, depending on considerations such as: Floating raft system. For a floating raft foundation, or floating foundation, the foundation has a volume such that, were that volume filled with soil, it would be equal in weight to the total weight of the structure. 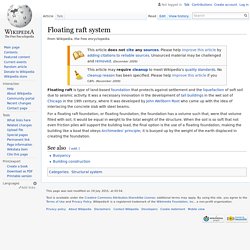 When the soil is so soft that not even friction piles will support the building load, the final option is the use of a floating foundation, making the building like a boat that obeys Archimedes’ principle; it is buoyed up by the weight of the earth displaced in creating the foundation. What is Raft Foundation? Difference between Raft Foundations and Mat Foundation.

Why Walt Disney Built a Theme Park on Swampland. Disney World opened on this date in 1971. 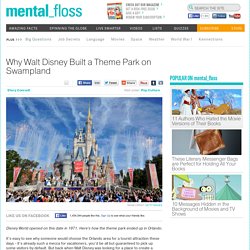 Here's how the theme park ended up in Orlando. It’s easy to see why someone would choose the Orlando area for a tourist attraction these days - it’s already such a mecca for vacationers, you’d be all but guaranteed to pick up some visitors by default. But back when Walt Disney was looking for a place to create a larger, roomier version of Anaheim’s Disneyland, Orlando was mostly swampland. So what possessed him to build one of the world’s busiest vacation spots on top of a bog?

In a word: Interstates. He knew he needed to build on the east coast after survey results showed him that a scant two percent of Disneyland visitors traveled from east of the Mississippi. Name Dropping Although he had solved the problem of where to build, a new dilemma cropped up: Walt knew if he was making queries about buying land under his own name, the insanely cheap swampland price of $180 an acre would immediately skyrocket.

This story originally appeared in 2011. How Chicago built its famous skyline on an infamous swamp. Editor's note: This was piece was produced in collaboration with the Chicago Architecture Foundation, which provided research, expertise and other assistance during its development. 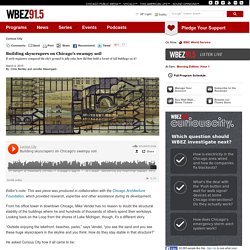 From his office tower in downtown Chicago, Mike Vendel has no reason to doubt the structural stability of the buildings where he and hundreds of thousands of others spend their workdays. Looking back on the Loop from the shores of Lake Michigan, though, it’s a different story. “Outside enjoying the lakefront, beaches, parks,” says Vendel, “you see the sand and you see these huge skyscrapers in the skyline and you think: How do they stay stable in that structure?”

He asked Curious City how it all came to be: What special techniques or extra work is required to construct massive buildings on swampland around Chicago? He’s right to wonder. As we found out, in the past 150 plus years, architects have struggled to tame Chicago’s swampy soil, with varying degrees of success. From swamp to city An early experiment. Raising Chicago: Raising Chicago's Streets. The ad appeared in the Tribune on January 29, 1857. 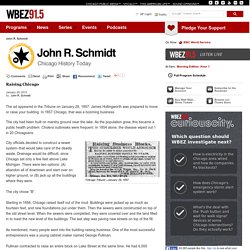 James Hollingworth was prepared to move or raise your building. In 1857 Chicago, that was a booming business. How to build on swamp. By Jude Njoku & Kingsley Adegboye Mr Denis Ndegbu had the choice of buying a plot of dry land in Agbara, a Lagos suburb but rather opted to buy a water-logged land near Ijanikin, a nearby neighbourhood. 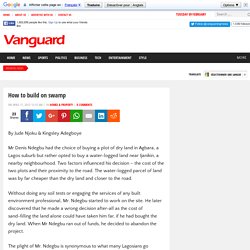 Two factors influenced his decision – the cost of the two plots and their proximity to the road. The water-logged parcel of land was by far cheaper than the dry land and closer to the road. Without doing any soil tests or engaging the services of any built environment professional, Mr. Ndegbu started to work on the site. The plight of Mr. Swamps are forested wetlands. Experts posit that the construction of houses on swamps require special attention. Against this backdrop, the CEO of Ethical Business and Management Associates EBAM, Mr Afolabi Adedeji, a Civil Engineer, advised those who have bought swampy land to ensure that the foundation of their buildings rests on sound soil so that when the super structure (building) is completed, the weight would be evenly spread.