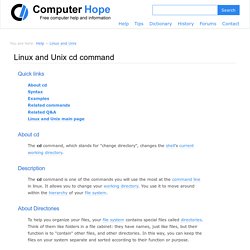 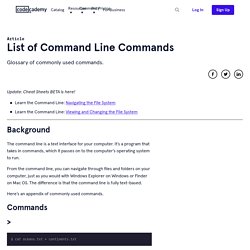 It's a program that takes in commands, which it passes on to the computer's operating system to run. From the command line, you can navigate through files and folders on your computer, just as you would with Windows Explorer on Windows or Finder on Mac OS. The difference is that the command line is fully text-based. Here's an appendix of commonly used commands. Terminal 101: Changing the Screenshot Capture Location. Posted 12/16/2013 at 3:59pm | by Cory Bohon Every Monday, we'll show you how to do something new and simple with Apple's built-in command line application. 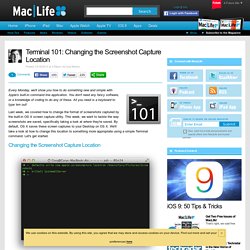 You don't need any fancy software, or a knowledge of coding to do any of these. All you need is a keyboard to type 'em out! Last week, we covered how to change the format of screenshots captured by the built-in OS X screen capture utility. This week, we want to tackle the way screenshots are saved, specifically taking a look at where they're saved. Changing the Screenshot Capture Location. DataCamp. You probably did not learn how to ride the bike by reading a book, or by watching a movie. 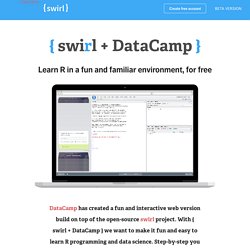 The same is true for data science. You learn-by-doing. Each course focuses on solving data science problems via fun coding challenges. Learning shouldn't be dull. That's why we did our best to make the learning experience as engaging and interactive as possible. Top 10 Best Cheat Sheets and Tutorials for Linux / UNIX Commands. Cheat sheet act as a reference tool which provides cut and paste kind of commands to complete a specific task. 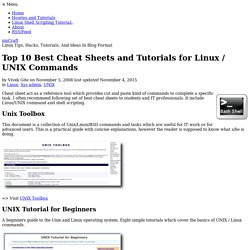 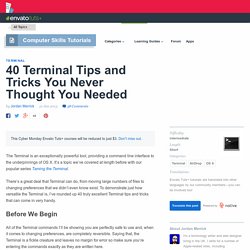 It’s a topic we’ve covered at length before with our popular series Taming the Terminal. There’s a great deal that Terminal can do, from moving large numbers of files to changing preferences that we didn’t even know exist. To demonstrate just how versatile the Terminal is, I’ve rounded up 40 truly excellent Terminal tips and tricks that can come in very handy. All of the Terminal commands I’ll be showing you are perfectly safe to use and, when it comes to changing preferences, are completely reversible. Saying that, the Terminal is a fickle creature and leaves no margin for error so make sure you’re entering the commands exactly as they are written here. As always, make sure you have a recent backup in case something does happen. Tip: If you’re unfamiliar with Terminal, I would strongly encourage you to read our introductory series on the topic, Taming the Terminal.

10 Terminal Commands That Every Mac User Should Know - Tuts+ Computer Skills Tutorial. The Terminal in OS X is often, in my opinion anyway, an overlooked area of the operating system. 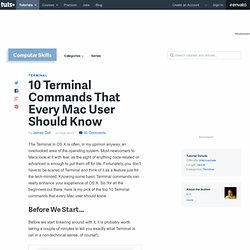 Most newcomers to Macs look at it with fear, as the sight of anything code-related or advanced is enough to put them off for life. Fortunately, you don't have to be scared of Terminal and think of it as a feature just for the tech-minded. Knowing some basic Terminal commands can really enhance your experience of OS X. So, for all the beginners out there, here is my pick of the top 10 Terminal commands that every Mac user should know. 25 Terminal Tips Every Mac User Should Know. Posted 12/11/2008 at 11:40am | by Johnathon Williams From customizing your Mac’s secret system preferences to remotely controlling another Mac or manipulating text files in a handful of sly ways, the terminal utility is more than just a Mac geek’s home base. 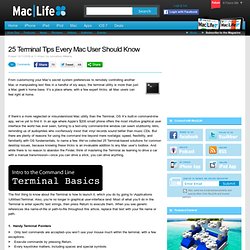 It’s a place where, with a few expert tricks, all Mac users can feel right at home. If there’s a more neglected or misunderstood Mac utility than the Terminal, OS X’s built-in command-line app, we’ve yet to find it. In an age where Apple’s $200 smart phone offers the most intuitive graphical user interface the world has ever seen, turning to a text-only command-line window can seem stubbornly retro, reminding us of audiophiles who vociferously insist that vinyl records sound better than music CDs.

But there are plenty of reasons for using the command line beyond mere nostalgia: speed, flexibility, and familiarity with OS fundamentals, to name a few. 1. 2. 11 Unix Commands Every Mac Geek Should Know. Posted 01/31/2011 at 2:26pm | by Cory Bohon Just imagine, a little over 20 years ago we were barely able to drag a mouse across the screen, let alone get around a desktop interface without typing in a few command lines. 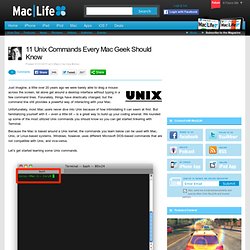 Forunately, things have drastically changed, but the command line still provides a powerful way of interacting with your Mac. Computers.tutsplus. Did you know that you can play Tetris on your Mac? 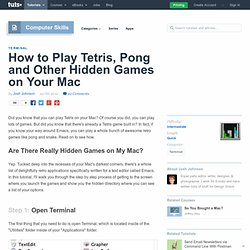 Of course you did, you can play lots of games. But did you know that there's already a Tetris game built in? In fact, if you know your way around Emacs, you can play a whole bunch of awesome retro games like pong and snake. Read on to see how. Yep. The first thing that you need to do is open Terminal, which is located inside of the "Utilities" folder inside of your "Applications" folder.