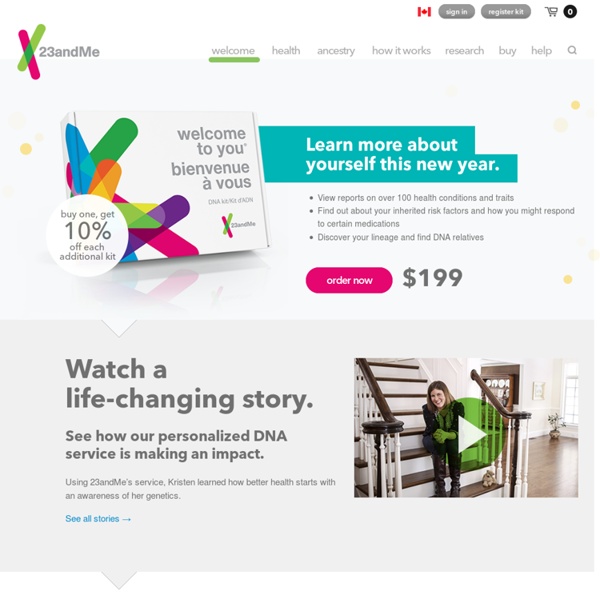 8 Shell Commands For Data Scientists There are many scenarios where you need to quickly analyze, modify and process large files, both in number and size. However, files are often text-based Comma Separated Values (CSV) files. Opening them with standard spreadsheet applications, such as Excel, LibreOffice or OpenOffice, overloads a machine's memory. Also, processing a large number of files in one batch often fails after a few hours because of some unexpected file anomaly. Health Design Challenge: d+collab // THE PATIENT RECORD We challenged designers across the country to reimagine the patient health record. Over 230 responded and inspired us with their submissions. See the Showcase

Industrial Biotechnology - Enzyme Innovation - Genencor Our website uses cookies so that we can provide you a better online experience and service; by continuing, you agree to our use of cookies in line with our Privacy Statement Close DuPont Industrial Biosciences DuPont website Fierce's top 5 feats in life sciences 'gamification' In less than 10 minutes, I aligned gene sequences from humans and several other species, spotted malaria-causing parasites in microscopy images, and took wild guesses about which types of cancer were linked with specific genes. It was all done without advanced training in genetics or pathology. Welcome to the "gamification" of life sciences research, where all you need is an Internet-connected device and a few minutes to play a part in advancing science. It's a growing trend within the open innovation and crowdsourcing movements sweeping the biopharma world.

All About The Human Genome Project (HGP) All About The Human Genome Project (HGP) The Human Genome Project (HGP) was one of the great feats of exploration in history - an inward voyage of discovery rather than an outward exploration of the planet or the cosmos; an international research effort to sequence and map all of the genes - together known as the genome - of members of our species, Homo sapiens. Completed in April 2003, the HGP gave us the ability, for the first time, to read nature's complete genetic blueprint for building a human being. In this section, you will find access to a wealth of information on the history of the HGP, its progress, cast of characters and future. Educational Resources An Interactive Timeline of the Human Genome [unlockinglifescode.org] An interactive, hyper-linked timeline of genetics that takes the reader from Mendel (1865) to the completion of the mapping of the human genome (2003).

Euthanasia allowed by Dutch court in cases of advanced dementia In the landmark decision, the court said that a physician may respond to a written request for euthanasia made before someone develops advanced dementia, provided certain legal requirements are met -- even if the patient's condition means they become unable to confirm that request. Euthanasia is legal in the Netherlands if the relevant criteria are met, which include a voluntary and well-considered request from the patient, "unbearable suffering without any prospect of improvement," and the lack of a "reasonable alternative," according to the Royal Dutch Medical Association. If those conditions are not met, the practice is still a punishable offense. In 2002, the Netherlands became the first country in the world to legalize euthanasia.

Careers – Join the Health Tech Revolution We asked: When did you last have an idea, bring it to your manager, and bring it to fruition? Past year We asked: How do you get to work? Drive We asked: How many times a week do you make or cook a meal in the office? Human Genome Project The Human Genome Project (HGP) is an international scientific research project with the goal of determining the sequence of chemical base pairs which make up human DNA, and of identifying and mapping all of the genes of the human genome from both a physical and functional standpoint.[1] It remains the world's largest collaborative biological project.[2] The first official funding for the Project originated with the US Department of Energy’s Office of Health and Environmental Research, headed by Charles DeLisi, and was in the Reagan Administration’s 1987 budget submission to Congress.[3] It subsequently passed both Houses. The Project was planned for 15 years.[4] In 1990, the two major funding agencies, DOE and NIH, developed a memorandum of understanding in order to coordinate plans and set the clock for the initiation of the Project to 1990.[5] At that time, David Galas was Director of the renamed “Office of Biological and Environmental Research” in the U.S. Project[edit] History[edit]

Stem cell treatment could accelerate diabetic wound healing There's no question that diabetes is on the rise worldwide. In the U.S., about 26 million children are diabetic, and roughly 347 million people across the globe have the disease. The World Health Organization estimates that diabetes will be the seventh leading cause of death in 2030. Up to 25% of this population will get a foot ulcer at some point in their life. These ulcers are often difficult to treat because diabetes impairs wound healing, and patients sometimes have to undergo traumatizing and costly amputations. But new preclinical research from the National University of Ireland Galway highlights the promise of adult stem cells to treat diabetic wounds.

PeerWise Welcome to PeerWise To log in, select your school / institution from the list below Sorry, I don't know about that place. Please type a few characters in the box below and then select your institution from the list. Just type the first few characters... Chapter 7. Coding aloud: Readability - Seriously Good Software: Code that works, survives, and wins Writing readable code Documenting contracts using Javadoc comments Replacing implementation comments with self-documenting code Source code serves two very different kinds of users: programmers and computers. Computers are as happy with messy code as they are with clean, well-structured systems. On the other hand, we programmers are utterly sensitive to the shape of the program. Even white space and indentation—completely irrelevant to the computer—make the difference between understandable and obscure code. (See appendix A for an extreme example.)

$99 genotype testing. (Not whole-genome sequencing) Identifies presence of genetic mutations, and risk of certain diseases or benign conditions relative to the population. Also points to ancestry; know your lineage, ethnic composition up to 100,000 years ago. Shows racial roots are very mixed; genetic indications of race could challenge social definitions of race. by bioteam Jul 9