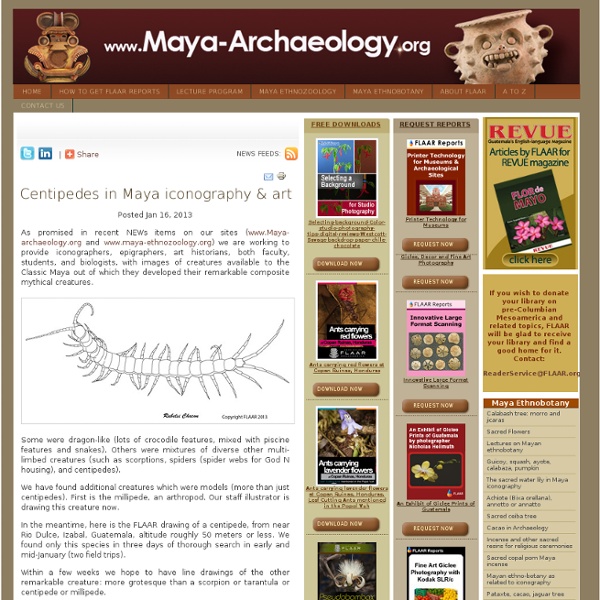 Underwater Archaeology Projects Sweden | Nordic | Europe | World A maritime archaeology project can be anything from a non-vocational wreck documentation to large official investigations. This list offers a selection of more or less current project. The list is far from complete. Sweden Kronan. Other Nordic & Baltic projects NTNU, the Norwegian University of Science & Technology, conducts various Norwegian projects that are presented on their excellent web site. Projects elsewhere in Europe Black Sea Projects. Projects worldwide Port of Alexandria. Old or terminated projects may be found among Nordic or worldwide wrecks. Cosquer Cave by Jean Clottes, Jean Courtin, Luc Vanrell A few facts must be recalled before presenting our new discoveries. The Cosquer Cave (Marseille, France) was discovered in 1985 by a diver, Henri Cosquer, deep under the sea (the original entrance is about 115 feet below present-day sea level) but its paintings were not mentioned until 1991 after three divers died in the cave when they got lost. The gallery slopes up for about 360 feet under water before reaching a huge chamber that partly remained above the sea and where many prehistoric paintings and engravings are preserved on the walls, as well as remains on the ground (charcoal from fires and torches, a few flint tools). This is the only painted cave in the world with an entrance below present-day sea level where cave art has been preserved from the flooding that occurred when the seas rose after the end of the last glaciation (Clottes & Courtin 1994, 1996). Photo Luc Vanrell Photo Jean Clottes Only adult hand stencils have been found.

List of "diseases" of black slaves, including the one that makes them want to escape. So diseased, those blacks. DRAPETOMANIA, OR THE DISEASE CAUSING NEGROES TO RUN AWAY. It is unknown to our medical authorities, although its diagnostic symptom, the absconding from service, is well known to our planters and overseers... In noticing a disease not heretofore classed among the long list of maladies that man is subject to, it was necessary to have a new term to express it. According to my experience, the "genu flexit"--the awe and reverence, must be exacted from them, or they will despise their masters, become rude and ungovernable, and run away. If treated kindly, well fed and clothed, with fuel enough to keep a small fire burning all night--separated into families, each family having its own house--not permitted to run about at night to visit their neighbors, to receive visits or use intoxicating liquors, and not overworked or exposed too much to the weather, they are very easily governed--more so than any other people in the world. back

Cronaca The Archaeology Channel - Welcome Little Salt Spring home page The Rosenstiel School’s Division of Marine Affairs manages an underwater archeological and ecological preserve at Little Salt Spring, in North Port, a site located in southern Sarasota County, Florida about 10 miles (16 km) from the Gulf of Mexico. Donated to the University in 1982, the spring is surrounded by undisturbed native hydric hammock containing several rare and endangered plant and animal species. During early prehistoric times (12,000–7,000 years ago) the sinkhole was an oasis in the peninsula that attracted seasonal hunters and gatherers. The site has produced the second-oldest dated artifact ever found in the southeast United States — a sharpened wooden stake some 12,000 years old. Little Salt Spring contains some of the oldest cultural remains in the United States. Photo by Curt Bowen

Egyptian Web Site Reviews by Siri Bezdicek Who knew? I certainly didnt. I went about what I thought would be the "simple" task of searching for Egypt-related websites; I had no idea there would so many of them. The first site I will discuss will be Egyptian Dream. The next site is Richard Deurers Egypt Art. For all you parents out there, I have a site that you and your child can visit together. You may not have guessed it but my next site carries the title Egypt Stamps. All said and done, my long and arduous quest was actually quite fun and very informative.

Petra: Lost City of Stone Deep within the deserts of Jordan lies the ancient city of Petra. Through a narrow gorge it emerges into view, revealing awe-inspiring monuments cut into the surrounding cliffs. What is this astonishing city? Who built it, and why? Two thousand years ago, Petra stood at a crossroads of the ancient Near East. The Nabataeans also erected monumental tombs, memorializing their kings and leaders. Today archaeologists are discovering clues to Petra's past. In New York, Petra: Lost City of Stone was made possible by Banc of America Securities and Con Edison.

ArchNet - WWW Virtual Library - Archaeology Collect Britain > Putting History in Place We've moved the rich selection of digitised historic content previously on our Collect Britain website to the Online Gallery. When Collect Britain went live in 2003 it opened up online access to an unprecedented range of British Library content. Since then the Library has developed new and more extensive websites that are better able to meet the nature of the material and the developing needs of its users. We have therefore migrated the content to these newer sites. All of this content continues to be available free of charge. The following image-based collections have moved to the Online Gallery: Also on Online Gallery you'll find more recent features, often related to our physical exhibitions, such as Henry VIII: Man and Monarch and Points of View. Moving the images to the Online Gallery has placed them alongside other British Library visual material, including some of our greatest treasures. The personal folders feature was used by a tiny minority of Collect Britain users.