The Top Ten Tips of Texturing 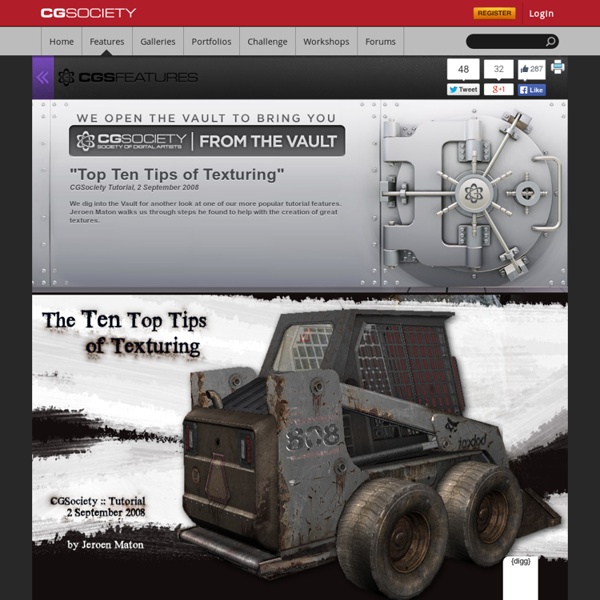 One way to create dirt has already been covered, and that's photo overlays. Those are great for general wear and tear on your texture. If you want small specific details, you'll need to use other techniques. Below are a two techniques I frequently use, one for dust and dirt, and one for rust. Dust and dirt can be done very quickly with a solid brownish layer and a layer mask. Simply put the dirt layer at the top of your stack, and paint with a low opacity and flow. Rust is a bit more tricky. I used to handpaint rust, but it always had a bit of a cartoony look, and I was never able to get crispy rust that looks convincing and real. That was until DennisPls shared his technique with me, which I've been using ever since. Good damage placement only requires one thing: logical thinking. That can be chipped paint, scratches, rust, etc. There is a sure chance that you'll find dust and dirt in such an area. This doesn't only work for small borders.

Ben Mathis - tutorials Static text and image based instructional material. PDF's require Adobe Acrobat. Comb map creation *new* Create "comb maps" to control anisotropy direction on a per pixel basis. Next-Gen Eyes *new* How to construct more realistic eyes using per-pixel shaders and transparent shells. MATERIALS Tutorials by Philip Klevestav < Back to Tutorials Index page On this page I have tried to create a few step by step tutorials including a lot of hints and tricks I use when creating such materials. I will not go into depth too much to avoid locking the tutorials to the programs I used when creating them. Game Texturing Techniques February 26, 2014 6:15 am Mark Masters If you’re at all familiar with the movie and video game 3D pipelines, you know they’re similar. They both utilize modeling, texturing, rigging, animation, etc.

The tree - Creating surface textures tip. By default Asset Tracking will not show the status for files on network drives. Read More >> Subscribe to RSS feed The UV editing improvements in Maya 2015 are the most substantial that we seen in many years. In part 1 of my Maya 2015 UV editing overview I'll cover the new Unfold 3D algorithm along with the companion BonusTools called AutoUnwrapUVs.

Low-poly Tips 2 – Game Art Asset Optimization These modeling, uv-mapping and texturing tips apply to 3D art asset work for games and similiar media. While they are best matched with low-poly 3D, they are definitely not limited to it. See also the previous collection here and the 3rd one here. Middle edgeloop optimization & UV-mapping a character It is common to model an edgeloop running around the middle of a character. 40 Metal Textures for Designers Texture can refer to the actual surface of a design or to the actual appearance of the design. Metal textures can also be very handy in web and graphic design. They can appear as 3D, or may even look futuristic, depending on how well you use it. Here, we came up with these freebies of metallic textures that can give an edge to your websites and blogs making it unique and attractive. In this next post, we were able to compile 40 Metal Textures for Designers, which seems unusual but at the same time unique and exquisite. They can be used in posters, as well as wall papers and graphic backgrounds.

Beautiful, Yet Friendly Part 1: Stop Hitting the Bottleneck Beautiful, Yet Friendly Part 1: Stop Hitting the BottleneckBeautiful, Yet Friendly Part 2: Maximizing Efficiency by Guillaume Provost A couple of years ago I was driving home to Quebec when I stopped near the Ontario border to gas up. I got out of my car to stretch and noticed two other travelers engaged in a complicated mish-mash of hand waving and broken English. I approached, thinking I could help the poor fellows by acting as a translator between both parties, when I realized that not only were they both French Canadians but neither of them knew it. If I found the situation amusing at the time, I've since come to realize that specialized jargons aren't so different from languages as different as French and English.