Alias Maya Tutorials. Tips and tricks for Mudbox, Maya and mental ray tutorials. Thanks to Nelson Cruz for his help writing this document. 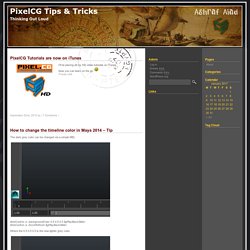 Installing Nvidia Driver Download the driver from nvidia web Make note of the download location and move it to the desktop Step 1: Disabling nouveau Go to Application > System Tools > Terminal Type : Su - Enter your root passwordType: gedit /etc/modprobe.d/blacklist.conf: Add the line blacklist nouveau Save and quit back to the shell as root, type: gedit /boot/grub/grub.conf Add the line rdblacklist=nouveau vga=31B At the end of the kernel line (make sure to expand the gedit to see the line end) Note: 1600×1200 – 346 1280×1024 – 31B 1400×1050 – 348 1024×768 – 318 800×600 – 315 Save and quit back to the shell as root,type: yum install binutils You will be asked to “confirm” a few times Enter Y for yes. At the end you should get: Complete! Step 2: Install missing packages Back to the shell as root, type:yum install gcc yum install kernel-devel This will install the package needed for nvidia Restart. 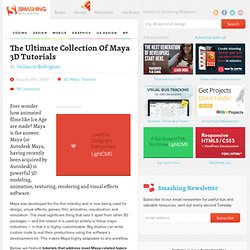 Maya is the answer. Maya (or Autodesk Maya, having recently been acquired by Autodesk) is powerful 3D modeling, animation, texturing, rendering and visual effects software. Maya was developed for the film industry and is now being used for design, visual effects, games, film, animation, visualization and simulation. The most significant thing that sets it apart from other 3D packages — and the reason it is used so widely in these major industries — is that it is highly customizable. Below, we feature tutorials that address most Maya-related topics for beginners and advanced users. Making snow in maya 2010. Making Snow in Maya 2010by Niklas Brandin Web: labs.ravenproduktion.se 1. 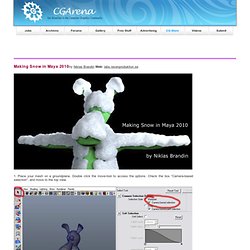 Place your mesh on a groundplane. Double click the move-tool to access the options. Check the box “Camera-based selection”, and move to the top view. Home. How to UV a Character in Maya 2009. Efficient UV mapping is a very important step before you can begin texturing any 3d model, and will inevitably affect every other stage of your workflow, from baking normal maps, all the way to performance, rendering, and frame rate . 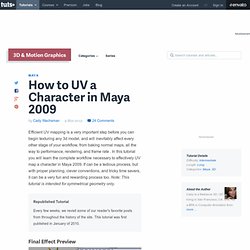 In this tutorial you will learn the complete workflow necessary to effectively UV map a character in Maya 2009. If can be a tedious process, but with proper planning, clever conventions, and tricky time savers, it can be a very fun and rewarding process too. Note: This tutorial is intended for symmetrical geometry only. Republished Tutorial Every few weeks, we revisit some of our reader's favorite posts from throughout the history of the site. Final Effect Preview Forward After your character model is complete, it will need to be UV'd before it can be textured. Step 1. Afficher le sujet - mia lens bokeh. Alias Maya Dynamics & Effects (FX) Tutorials. Apprenez à modéliser en 3D avec Autodesk Maya. Blizzard's Warcraft - The Night Elf.

Here is the long awaited tute on her eyes. 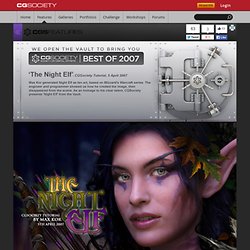 When rendering something like a human face, it's still more a task of using my observation skills and there is much less depending on the software itself to give me that pleasing render. When I started making material for the Elf's eyeballs, I looked at a great many photographs with similar lighting conditions to that which I used in my scene, so I’d already imagined what the final result should look like.

I made the material for the eyes reflective, but not too much so. Just enough so it would only pick up the strongest light sources and not reflect everything in the scene. I placed some small light-emitting objects right in front of the eyes, so they did not effect the overall scene lighting, to simulate some partially obscured light in front of her face. For a better close-up, it’s probably a better idea to use a light-emitting image for some more believable details. Here is a picture of the light-emitting objects in the scene. Making of Ferrari F2 500. 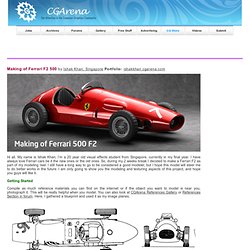 My name is Ishak Khan; I’m a 20 year old visual effects student from Singapore, currently in my final year. I have always love Ferrari cars be it the new ones or the old ones. So, during my 2 weeks break I decided to make a Ferrari F2 as part of my modeling reel. I still have a long way to go to be considered a good modeler, but I hope this model will steer me to do better works in the future. I am only going to show you the modeling and texturing aspects of this project, and hope you guys will like it. Getting Started Compile as much reference materials you can find on the internet or if the object you want to model is near you, photograph it.

Modeling Before I start modeling, I would like to share a very basic thing while modeling hard surface objects.