Students Are Being Rejected From The Polls Because Of North Carolina’s Voter ID Law. North Carolina’s controversial voter identification law is being used for the first time in Tuesday’s primary, and registered voters are experiencing the consequences of the voter suppression measure. 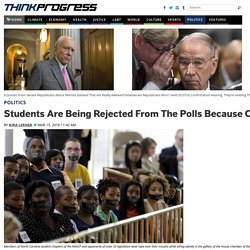 About 218,000 North Carolinians, roughly five percent of registered voters, do not have an acceptable form of government-issued ID that is now required under state law to cast a ballot. Early voting offered a glimpse of the problems that will arise on Tuesday — during the past ten days of early voting, many college students were blocked from the polls. North Carolina’s WRAL reported that 864 people across the state had cast provisional early ballots because they did not have acceptable forms of ID, and four of the five counties with the highest concentrations of provisional ballots from voters without ID were in places with college campuses. “Because this is so much affecting young people, we’re teaching them the wrong lesson about democracy and about voting,” Hall said.

Coulter Culture. Ann Coulter's new book, If Democrats Had Any Brains They'd Be Republicans, hits bookshelves today, and as is his wont, George Gurley sat down with the self-proclaimed right-wing polemicist for a long chat [UPDATED: read the complete interview here]. 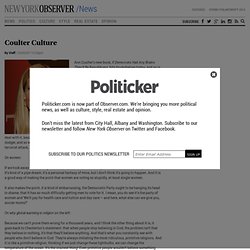 George gave us a few bits of wit and wisdom from his interview, while the television is going wild about the beminiskirted babe. On how much blame Bill Clinton deserves for the terrorist attacks of 9/11: A lot. Jimmy Carter got the whole thing started, Bill Clinton let it build, build, build, build, build. He wouldn't deal with it, because he had no credibility on deploying the military. On women: If we took away women's right to vote, we'd never have to worry about another Democrat president. It also makes the point, it is kind of embarrassing, the Democratic Party ought to be hanging its head in shame, that it has so much difficulty getting men to vote for it.

Advertisers Distancing Themselves Over Limbaugh 'Slut' Rant - Business. Bill O'Reilly: Media Labeling Norway Killer Breivik 'Christian' Because 'They Don't Like Christians' Bill O'Reilly sternly criticized the media for describing Anders Behring-Breivik, the man who has admitted to committing the mass killings in Norway, as a Christian, saying that such a thing was "impossible. 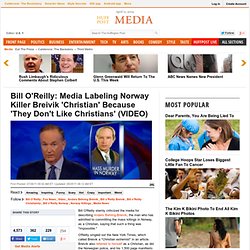 " O'Reilly singled out the New York Times, which called Breivik a "Christian extremist" in an article. Breivik also referred to himself as a Christian, as did the Norwegian police, and his 1,500 page manifesto has been described as coming from a Christian perspective. In the manifesto, he writes that he does not have a "personal," religious relationship with Christ, believes in Christianity "as a cultural, social, identity and moral platform," which he says "makes [me] Christian. " Current Events, Top News, Analysis and Opinion - The Stir by CafeMom. CNN's Erick Erickson Suggests "Mass Bloodshed" May Be Necessary If  Roe  Isn't Overturned. CNN's Erick Erickson is also Editor-in-Chief and "Dear Leader" of the conservative blog Red State, so this charming passage posted by "The Directors" is presumably his doing: Here at RedState, we too have drawn a line. 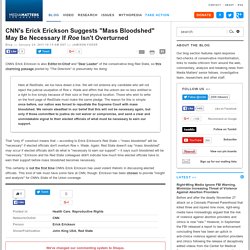 We will not endorse any candidate who will not reject the judicial usurpation of Roe v. Wade and affirm that the unborn are no less entitled to a right to live simply because of their size or their physical location. Those who wish to write on the front page of RedState must make the same pledge. The reason for this is simple: once before, our nation was forced to repudiate the Supreme Court with mass bloodshed. That "only if" construct means that -- according to Erick Erickson's Red State -- "mass bloodshed" will be "necessary" if elected officials don't overturn Roe v.

This certainly is not the first time CNN's Erick Erickson has used violent rhetoric in discussing elected officials. 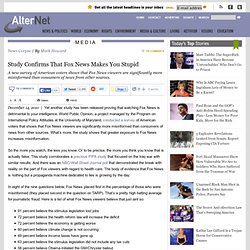 Join our email list: Stay up to date with the latest headlines via email. Yet another study has been released proving that watching Fox News is detrimental to your intelligence. World Public Opinion, a project managed by the Program on International Policy Attitudes at the University of Maryland, conducted a survey of American voters that shows that Fox News viewers are significantly more misinformed than consumers of news from other sources. So the more you watch, the less you know. In eight of the nine questions below, Fox News placed first in the percentage of those who were misinformed (they placed second in the question on TARP). The conclusion is inescapable. By the way, the rest of the media was not blameless. The conclusions in this study need to be disseminated as broadly as possible.

This is not an isolated review of Fox’s performance. Mark Howard is an artist and author and the publisher of News Corpse .