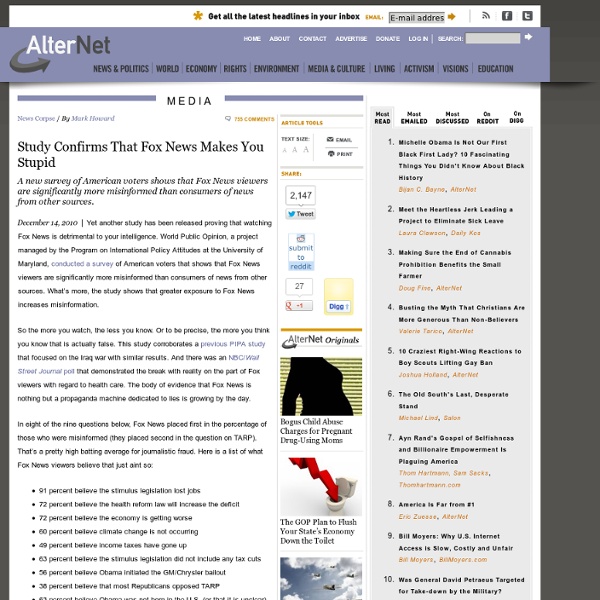 December 14, 2010 | Like this article? Join our email list: Stay up to date with the latest headlines via email. Yet another study has been released proving that watching Fox News is detrimental to your intelligence. World Public Opinion, a project managed by the Program on International Policy Attitudes at the University of Maryland, conducted a survey of American voters that shows that Fox News viewers are significantly more misinformed than consumers of news from other sources. So the more you watch, the less you know. In eight of the nine questions below, Fox News placed first in the percentage of those who were misinformed (they placed second in the question on TARP). The conclusion is inescapable. By the way, the rest of the media was not blameless. The conclusions in this study need to be disseminated as broadly as possible. This is not an isolated review of Fox’s performance. Mark Howard is an artist and author and the publisher of News Corpse .

FOX NEWS INSIDER: “Stuff Is Just Made Up” Asked what most viewers and observers of Fox News would be surprised to learn about the controversial cable channel, a former insider from the world of Rupert Murdoch was quick with a response: "I don't think people would believe it's as concocted as it is; that stuff is just made up." Indeed, a former Fox News employee who recently agreed to talk with Media Matters confirmed what critics have been saying for years about Murdoch's cable channel. Namely, that Fox News is run as a purely partisan operation, virtually every news story is actively spun by the staff, its primary goal is to prop up Republicans and knock down Democrats, and that staffers at Fox News routinely operate without the slightest regard for fairness or fact checking. "It is their M.O. to undermine the administration and to undermine Democrats," says the source. "They're a propaganda outfit but they call themselves news." And that's the word from inside Fox News. Note the story here isn't that Fox News leans right.

Richard T. Hughes: The Christian Right in Context, Part 1: The Long View Thirty-five years ago, in a time that seems like ancient history to most young people today, the eminent social critic Robert N. Bellah wrote a book that illumines the current American crisis with devastating precision. I do not use the phrase, "American crisis," casually. All Americans, whether on the right, the left or in between, understand that the nation is now in a crisis of significant proportions. But most Americans fail to grasp how deeply that crisis runs. Liberals and conservatives alike seem to think that the core of the American crisis stems from a flagging economy and the threat from Islamic terrorists. But the American crisis runs much deeper than that. The Christian Right stands at the heart of our current crisis since, for 30 years and more, the Christian Right has so successfully eaten away at the core, bedrock values that shaped this nation at its founding. And precisely in that claim we find the seeds of the current American crisis. The Revolutionary Period The Civil War

Republicans Plan to Pay For Tax Cuts With Unemployment Benefits By: Rmuse November 8th, 2010 see more posts by Rmuse Republicans are using spending cuts as a weapon and condition for extending unemployment benefits to millions of Americans who have lost their jobs. Republicans claim they want to cut spending by $5 billion to $6 billion each month, and on the surface it sounds like a good idea to reduce the national deficit. At the same time though, Republicans are fighting to extend the Bush-era tax cuts for the wealthiest Americans that helped create the record debt we are drowning in. When Republicans gave tax cuts to rich people, they knew they were not funded, and had to let them expire after 10 years. Republicans campaigned on fiscal responsibility and smaller government, and used the poor teabaggers to garner votes and take control of the House. Enter the poor, unemployed, and working-class Americans. If the Bush tax cuts expire, the wealthiest 2% of Americans will see their tax liability increase by 3%, and their net worth would not decrease.

Michigan Asst. AG Temporarily Suspended After Attacking Gay Student On His Blog Michigan Assistant Attorney General Andrew Shirvell has been temporarily suspended, pending a hearing by the AG's office over his blog posts that targeted a University of Michigan student for being gay. [Late Update: Shirvell has been fired. Read the whole story here.] Shirvell was banned from the University of Michigan campus and took a leave of absence after repeatedly blogging about U of M class president Chris Armstrong's "radical homosexual agenda," and harassing him on campus. Shirvell returned from the leave of absence last Friday, and faced a disciplinary hearing by the Attorney General. The Detroit News reports that John Sellek, a spokesman for Attorney General Mike Cox, said: "Because we are extending the hearing, we placed him on administrative paid leave." The University of Michigan also lifted its ban of Shirvell last week, though stipulated that he cannot have contact with Armstrong while on campus. Full coverage of Shirvell here.

Revealed: Rand Paul reverses on core campaign pledge before even taking office | Raw Story By John ByrneMonday, November 8, 2010 11:57 EDT Money talks. Rand Paul, the next Republican US senator from Kentucky, has done an about-face on earmarks even before taking office. In an interview published over the weekend with the Wall Street Journal, Paul signaled a major backtrack on a core campaign promise: cutting federal earmarks. “In a bigger shift from his campaign pledge to end earmarks, he tells me that they are a bad “symbol” of easy spending but that he will fight for Kentucky’s share of earmarks and federal pork, as long as it’s doled out transparently at the committee level and not parachuted in in the dead of night,” Paul told the Journal for an interview published Saturday. “I will advocate for Kentucky’s interests,” he added. The comments markedly diverge from a promise still live on his campaign website, titled, “Earmark ban coming?” “The Tea Party movement is an effort to get government under control,” Paul is quoted as saying on his site. Paul’s predecessor, Sen. “Yes.

Sharia law banned: Oklahoma to become first US state to veto Islamic code By Daily Mail Reporter Updated: 21:54 GMT, 2 November 2010 Oklahoma is set to become the first state in America to outlaw Sharia law. Voters were expected to rule it illegal for judges to rely on the Islamic code when ruling on cases following a state-wide ballot. Proponents of the ban said it was a ‘preemptive strike’ to stop Oklahoma suffering the same fate as European countries such as Britain, where Sharia is routinely used in Muslim communities. Preemptive: Voters are expected to rule it illegal in Oklahoma to rely on the Islamic code when adjudicating cases following a state-wide ballot Even though Oklahoma has a very small proportion of Muslims - just 15,000 out of a population of 3.7million - they want to stamp out the problem before it begins. Around a dozen other states will be watching closely to see if the proposition is approved amid heightened anti-Muslim sentiment fueled by row over the Ground Zero Mosque. ‘I see this in the future somewhere in America,’ he said.

Oklahoma may have banned use of Ten Commandments along with Sharia law | Raw Story By David EdwardsMonday, November 8, 2010 11:07 EDT Update: Court temporarily blocks Islamic law ban A federal judge has issued a temporary restraining order against a constitutional amendment that would have banned Sharia law in Oklahoma. “U.S. District Judge Vicki Miles-LaGrange ruled Monday morning in Oklahoma City following a brief hearing,” the Associated Press reported. “The order will remain in effect until a Nov. 22 hearing on a requested preliminary injunction.” Original story continues below… Residents in Oklahoma thought they were voting to ban Sharia law last Tuesday but it turns out that the new constitutional amendment may also extend to the Ten Commandments. The Oklahoma ballot measure orders judges not to consider Islamic or international law when deciding cases. “Many of us who understand the law are scratching our heads this morning, laughing so we don’t cry,” he told CNN. David Edwards David Edwards has served as an editor at Raw Story since 2006.

Rand Paul Supporter Stomps Head Of Female MoveOn Member Outside KY Debate (VIDEO) Josh Green flagged an incident that occurred outside of the Rand Paul-Jack Conway debate in Lexington, Kentucky Monday night that's already dominating the news in Kentucky and could easily make headlines nationally. As the candidates arrived, a group of Paul supporters pulled a female MoveOn member to the ground and held her there as another Paul supporter stomped on the back of her head and neck. According to the Louisville Courier Journal, "Lauren Valle of MoveOn.org approached Paul and tried to give him an "employee of the month award" from Republicorp...a fake business MoveOn created to symbolize what it says is the merger of the GOP and business interests controlling political speech." The whole thing was caught on video. At the end of the clip, Valle is alert and speaking with the press. We have a call out to the Lexington police department's public affairs office for further comment. [TPM SLIDESHOW: TPM's Day At 'Fancy Farm': Kentucky Pols Spar At Annual Political Kickoff Picnic]