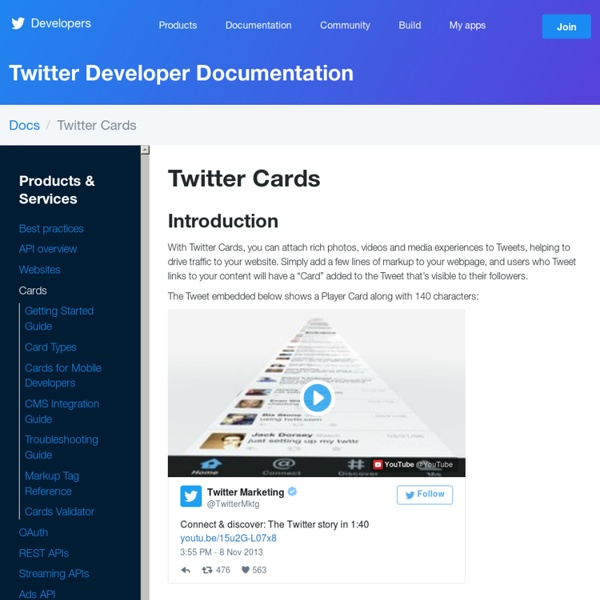 Introduction With Twitter Cards, you can attach rich photos, videos and media experiences to Tweets, helping to drive traffic to your website. Simply add a few lines of markup to your webpage, and users who Tweet links to your content will have a “Card” added to the Tweet that’s visible to their followers. The Tweet embedded below shows a Player Card along with 140 characters: Drive engagement from your Tweets The different Card types each have a beautiful consumption experience built for Twitter’s web and mobile clients: Summary Card: Title, description, and thumbnail.Summary Card with Large Image: Similar to the Summary Card, but with a prominently-featured image.App Card: A Card with a direct download to a mobile app.Player Card: A Card that can provide video/audio/media. To learn more about how the Card meta tags and web crawler work, check out the Getting Started Guide. Drive app downloads from your Tweets Get started in 4 simple steps Ready to get started with Cards?

Share Bookmarklet Updated on Wed, 2014-02-12 17:33 Overview The Share Bookmarklet makes it easy for you to share any webpage on Twitter, even if there isn’t a Tweet Button. It works in all major browsers and is easy to install. Libraries Updated on Tue, 2014-01-21 23:42 These libraries, while not necessarily tested by Twitter, should support Twitter API v1.1. Want your library to be included in this index or need to update the details we have? Submit your library for inclusion! Libraries built and maintained by Twitter How Twitter in the Classroom is Boosting Student Engagement Professors who wish to engage students during large lectures face an uphill battle. Not only is it a logistical impossibility for 200+ students to actively participate in a 90 minute lecture, but the downward sloping cone-shape of a lecture hall induces a one-to-many conversation. This problem is compounded by the recent budget cuts that have squeezed ever more students into each room.

The City that Disappears By the fans // Alexandre (fr) As announced earlier (read here), here’s the first review of our forthcoming album made by one of our closest fan, Alexandre, a french guy living now in Denmark. For french readers! Expect more fans reviews shortly! 14 Ways to Make Your Twitter Updates More Creative Are you looking for creative ways to improve your Twitter updates? Do you want to spark better conversations with your followers? Coming up with interesting content ideas for tweets can be challenging for social media marketers. In this article I share 14 ways you can achieve more engagement with your Twitter audience. Find 14 ways to publish more creative Twitter updates.

How to Write a Twitter Bot using Google Scripts - Tutorial 09 Apr 2016 Learn how you can create your own Twitter bots without writing a single line of code. The bots can favorite, retweet, reply tweets or even send DMs to users. I Made Some Free Facebook Connect Buttons In PNG & PSD If there is one site that has influenced me the most this year, it’s the invite-only designer showcase Dribbble. The attention to detail in the work on there is amazing. It’s made me step back and realise that I have to improve, everything from font usage to organising layers properly. How to Decode a Tweet When you first start using Twitter, one of the things you have to figure out is how to decode Tweets. What does each part represent? What does it mean when a word starts with a #? Below is a Tweet as it might be displayed on the Twitter website when viewed on a computer. Note that not all Tweets might include all of these exact attributes.

The Mysterious Words You Can’t Tweet The legend goes something like this: as a child, Twitter co-founder Jack Dorsey’s father would relentlessly hound him to “Get better”, so Jack eventually banned the phrase from being tweeted. Go ahead and try it, the tweet won’t go through. But the legend? It’s a hoax. See, way back when, Twitter wasn’t a popular smart phone app, it was a way to publish up to 140 characters to the Internet via text message. To let people follow and unfollow each other, change their bio, and more straight from SMS, Twitter created a list of commands that when sent wouldn’t be tweeted, but would trigger actions instead. Must-Have Social Meta Tags for Twitter, Google+, Facebook and More At Moz, we strive to include social media metadata in all new pieces of content that we publish. This allows us to optimize for sharing Twitter, Facebook, Google+ and Pinerest by defining exactly how titles, descriptions, images and more appear in social streams. Think of it as conversion rate optimization for social exposure. The implications for SEO are also significant.

How to Use Twitter for Business and Marketing Is Twitter a part of your social media marketing? Or have you let your Twitter marketing drop off lately? In any case, with the latest Twitter updates, trends in multi-screen usage and real-time marketing, you’ll likely want to take a fresh look at what Twitter has to offer. Here’s a checklist of everything your business needs to do to get on (or back on) Twitter and start seeing great results. About Twitter Twitter is a short message communication tool that allows you to send out messages (tweets) up to 140 characters long to people who subscribe to you (followers).