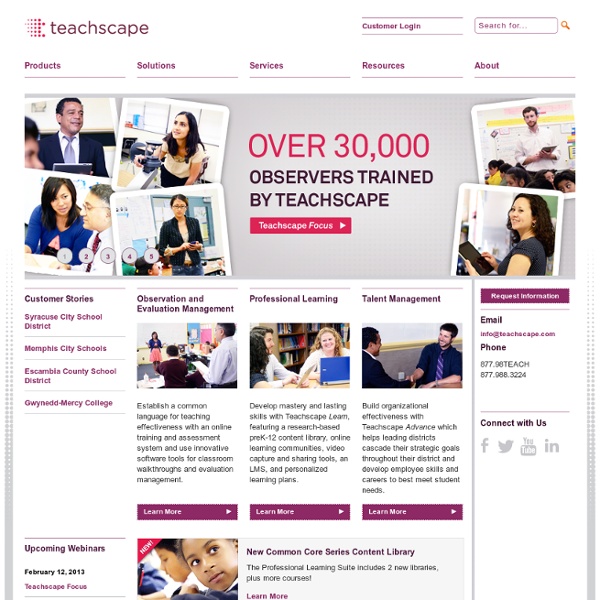 Teachscape-Journal Article Teacher Observations | News Teacher Observation App Goes Native on iPad By Dian Schaffhauser03/21/12 An educational technology company that specializes in creating products for improving educator practices has launched a version of its teacher observation application for the Apple iPad. Teachscape's Reflect Live app lets observers collect classroom evidence and works even when there's no Wi-Fi connection available in the room. The non-iPad version of the product works on a laptop or another type of tablet device. According to the company, the app has a simple interface for recording details during an observation. The iPad edition can work with the dictation feature included in the new iPad, introduced by Apple earlier this month. Performing a teacher observation with Reflect Live follows a five-part process. The iPad version of the app is free in the iTunes store. About the Author Dian Schaffhauser is a writer who covers technology and business for a number of publications.

Maths Maps – A New Collaborative Project I am excited to introduce you to my new project idea that I hope will result in some engaging content for our classes. It is collaborative in the same way the Interesting Ways resources are and I will need your help to make it a success. Elevator Pitch Using Google Maps.Maths activities in different places around the world.One location, one maths topic, one map.Activities explained in placemarks in Google Maps.Placemarks geotagged to the maths it refers to. Some background Four years ago I created Google Earth resources for the classroom and posted them to the GE Community Forum. The only issue with Google Earth is that it is restrictive in two ways. Luckily Google Maps has caught up and using the collaborative features I can now invite other teachers and educators to help build on these resources. First Attempts The problem here is that although the ideas were organised under maths topics (see map) with different coloured pins, there was no distinction between age appropriateness.

Comment Easy Assessment One-to-One Technology Integration in the Upper Elementary Classroom As a third grade teacher who has been fortunate enough to work in a 1:1 classroom for the past three years, I believe that the upper elementary grades are the ideal time to integrate 1:1 technology into the classroom. Because students at that age level often spend extended parts of the school day with one homeroom teacher, integrating technology smoothly across multiple subjects is easier than it would be if students had different teachers for each individual class period. Despite this advantage, there have been some bumps along the road as I've worked to integrate my class set of netbooks into the daily life of my classroom. 1) Teach Safe, Effective Technology Use The goal in any 1:1 classroom should be for the technology to simply become a tool that the students use when needed to accomplish a specific goal. A) How to Use Search Engines Effectively B) Staying Safe While Online C) Keyboard Shortcuts Cutting and pastingFinding a word on a pageUndoing your previous action

Comment Pennsylvania Published: Sunday, Feb. 5, 2012 School administrators gave 99.4 percent of all Pennsylvania teachers "satisfactory" ratings during the 2009-10 school year, the latest data available from the state Department of Education show. But, said Sandi Jacobs, vice president of the National Council on Teacher Quality: "That kind of teacher evaluation system tells you almost nothing." The state's teacher evaluations "give no consideration to teacher effectiveness and include no objective measures of student performance," Jacobs said. The nonprofit, nonpartisan council, partly funded by the Bill and Melinda Gates Foundation, recently gave Pennsylvania an overall grade of D+ for progress on policies to support and measure teacher effectiveness and an F for efforts to rid schools of ineffective teachers. That could change. "Teacher evaluation should not be based on a single test score," said Wythe Keever, a spokesman for the Pennsylvania State Education Association, the state's largest teachers union.

Creating a Robust and Safe BYOD Program Until recently, student electronic devices, from cell phones to iPods to laptop computers, were the forbidden fruit in schools. But with technology budgets languishing and such devices becoming more powerful, affordable and omnipresent in students’ lives, district technology leaders are now eyeing a welcome educational harvest through bring-your-own-device (BYOD) programs. Lucy Gray, project director of the Leadership for Mobile Learning Initiative at the Consortium for School Networking (CoSN), has studied early BYOD adopters. High school, middle school and even elementary school students in a growing number of districts are being encouraged to bring in the very electronic equipment they were once admonished to leave at home. To hear Wilson and other tech directors tell it, these devices are more than welcome. In Minnesota, Wilson is overseeing the third year of a BYOD program, which took root at three high schools and five classrooms in the district’s elementary schools. Early Reviews

Google Translate eCove Administrator Characteristics of 21st Century Teachers As others try to discover the next revolutionary idea to elicit changes in education, educators in the classroom are making things happen now, despite the hurdles they sometimes face. Innovative educators today are often referred to as 21st Century Teachers, and share many unique characteristics. I believe that 21st Century Teachers: Do what they have to for their students. Although they may not be provided all of the tools to be successful, they find the means to do what must be done for their students. Provide relevancy in their content. The students don’t care to learn something because they need to learn it to pass a state exam. Are transparent. Students do not respect the position, they respect the person. Don’t wait to master something before they implement it. Students know a bad lesson when they are sitting through one. Learn alongside their students. There is no way you can learn everything that the kids currently know. Don’t stop students from trying. Change things up.