Why Integrate Technology into the Curriculum?: The Reasons Are Many 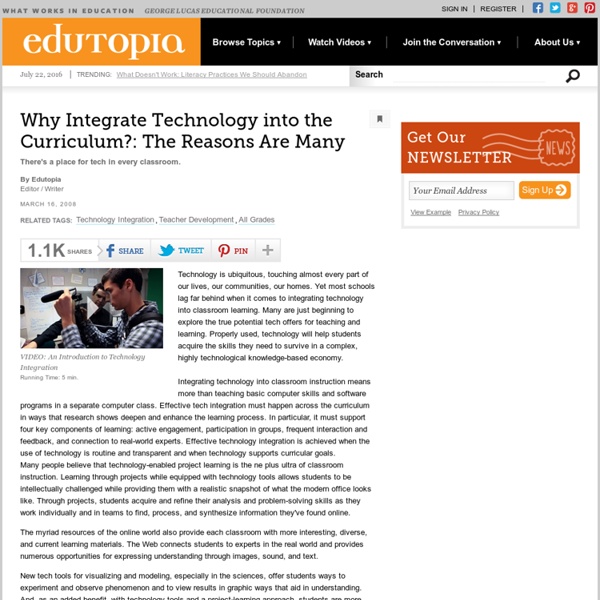 VIDEO: An Introduction to Technology Integration Running Time: 5 min. Technology is ubiquitous, touching almost every part of our lives, our communities, our homes. Yet most schools lag far behind when it comes to integrating technology into classroom learning. Many are just beginning to explore the true potential tech offers for teaching and learning. Properly used, technology will help students acquire the skills they need to survive in a complex, highly technological knowledge-based economy. Integrating technology into classroom instruction means more than teaching basic computer skills and software programs in a separate computer class. Many people believe that technology-enabled project learning is the ne plus ultra of classroom instruction. The myriad resources of the online world also provide each classroom with more interesting, diverse, and current learning materials.

Web 2.0 What Went Wrong? - Trebor Scholz &#039;journalisms&#039; - Collectivate.net Listen to Slide Cast Course DescriptionIs it feasible to live ethical, meaningful lives in the context of the Social Web today? This course formulates a critique of the Social Web. Based on the rapid growth of participation in social life online and in mobile space-- from social news, referral, social search, media sharing, social bookmarking, tagging, virtual worlds and social networked games, social mapping, IM, social networking, blogging and dating, this class formulates a critical analysis of the international Social Web with regard to privacy, intellectual property, and the utilization of social creation of value through the lens of a small number of case studies in the areas of education, political activism, and art. The course starts with a history of computer-facilitated networked sociality. We’ll discuss the preconditions, motivations, and typologies of participation in order to then start to debunk the Web 2.0 ideology.

NAESP Today's students need educators to re-envision the role of technology in the classroom. by Nancye Blair Principal, January/February 2012 Web Resources A dramatic shift is sweeping through our schools. The signs are all around us. Technology in the Classroom Intelligence has always been coveted and sought after. It's clear that a high quality education is a common value we share in the United States and around the world. This is seen in households and in law. For example, President Obama recently put forth a proposal for universal preschool.

20 Types of Tablet Tools for Teaching UPDATED on October 1, 2012 In May 2011, after a year of experimentation, I became sold on the idea of using a tablet instead of a laptop as my primary mobile computer. It was my turn for a workstation update, and I chose a desktop. In some U.S. schools, librarians are no longer saying, “Shh!” By Nick Pandolfo Buffy Hamilton speaking at a conference on digital media and education in Chicago. (Photo by Nick Pandolfo) Buffy Hamilton, who calls herself “The Unquiet Librarian,” holds the phone receiver away from her ear at Creekview High School library in Canton, Ga., revealing a cacophony of noise in the background. “It sounds like that a lot of the time,” says Hamilton, who welcomes what she calls “the hum of learning”—students talking about projects, watching videos and even singing “Happy Birthday.”

How to Integrate Technology When technology integration in the classroom is seamless and thoughtful, students not only become more engaged, they begin to take more control over their own learning, too. Effective tech integration changes classroom dynamics, encouraging student-centered project-based learning. Think about how you are using technology with your students. Are they employing technology daily in the classroom, using a variety of tools to complete assignments and create projects that show a deep understanding of content? If your answer is "No," is it because you lack enough access to technology?

Smart Phones and Tablets in the Classroom At a school district outside Chicago, students participated in a French class by using cellphones to call classmates and speak with them in French. And when school starts this fall at Mason High School near Cincinnati, students like Mrudu Datla will pack iPads and iPhones in their backpacks. "(Using technology in everyday life is) not that new to us because we grew up with technology," Datla, a sophomore, said. Although schools have traditionally banned or limited cellphones in the classroom, 73% of Advanced Placement and National Writing Project teachers said their students use phones in the classroom or to complete assignments, according to a Pew Research Center study released in February. "Teachers are starting to take advantage of the opportunities of cellphones in the classroom," said George Fornero, superintendent of Township High School District 113, located outside Chicago, whose school system has begun allowing its students use cellphones. Contributing: Michael D.

Technology in Schools Faces Questions on Value Jim Wilson/The New York Times Students using an interactive whiteboard, part of an ambitious technology plan in the Kyrene School District in Arizona. To hear from more experts, and to share your own predictions for the future of technology in the classroom, visit the Bits blog. 50 Education Technology Tools Every Teacher Should Know About via Edudemic Technology and education are pretty intertwined these days and nearly every teacher has a few favorite tech tools that make doing his or her job and connecting with students a little bit easier and more fun for all involved. Yet as with anything related to technology, new tools are hitting the market constantly and older ones rising to prominence, broadening their scope, or just adding new features that make them better matches for education, which can make it hard to keep up with the newest and most useful tools even for the most tech-savvy teachers. Here, we’ve compiled a list of some of the tech tools, including some that are becoming increasingly popular and widely used, that should be part of any teacher’s tech tool arsenal this year, whether for their own personal use or as educational aids in the classroom. Social Learning These tools use the power of social media to help students learn and teachers connect.

Using Technology in the Early Childhood Classroom By Kimberly Moore Kneas, Ph.D. and Bruce D. Perry, M.D., Ph.D. Early Childhood Today: Are young children's brains (ages three through six) well suited to the use of technology? (We define technology as children using cameras, computers, tape recorders and video cameras in classroom projects.) If so, how? Introduction to Edcamp: A New Conference Model Built on Collaboration Editor's Note: Blogger Mary Beth Hertz was one of the organizers of Edcamp Philly, a free education "unconference" that took place in Philadelphia last May. The event attracted the attention of educators from around the world--not only for the excellent content and collaborative spirit, but also for the unconference model itself -- one that costs next to nothing to produce by facilitating ad-hoc community participation. Since then, groups of educators around the world have begun to organize local edcamps in their areas. In this four-part series, Ms.