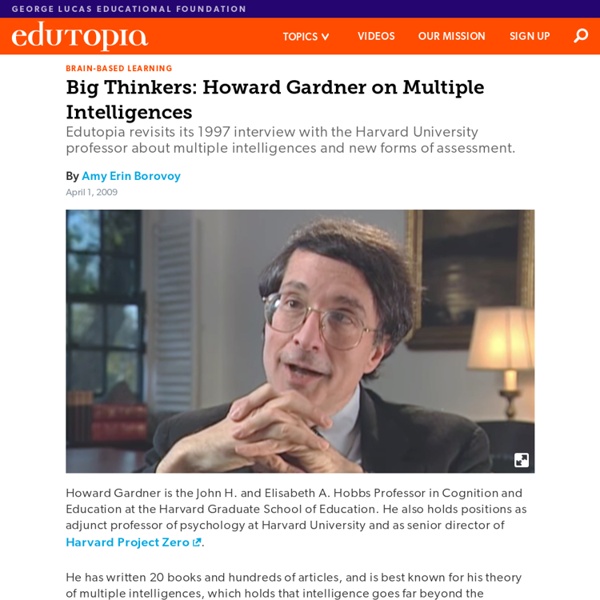 Howard Gardner: We have schools because we hope that someday when children have left schools that they will still be able to use what it is that they've learned. And there is now a massive amount of evidence from all realms of science that unless individuals take a very active role in what it is that they're studying, unless they learn to ask questions, to do things hands-on, to essentially recreate things in their own mind and then transform them as is needed, the ideas just disappear. The student may have a good grade on the exam. The idea of multiple intelligences comes out of psychology. We have this myth that the only way to learn something is read it in a textbook or hear a lecture on it, and the only way to show that we've understood something is to take a short-answer test or maybe occasionally with an essay question thrown in. So let's take the area of science. The most important thing about assessment is knowing what it is that you should be able to do. Related:  Education

5 Educational Apps for Kids | Techrony Home > Apps > 5 Educational Apps for Kids My daughter was a mere year old when the first iPhone hit the market, and she was quite capable of operating my phone better than my husband by the time she was two. The phone became our default device if she was bored in public, so I soon loaded my phone up with apps for kids. But we didn’t select “fun” games; while 90% of American kids are gamers (according to the Kids and Gaming report by NPD Group), we wanted her to use it as a learning tool instead of simple entertainment (at least until she’s on to us), so we chose educational apps instead. Four years (and three generations of phones) later, there are so many great teaching apps for kids that my kid has learned counting, spelling, and basic math with my phone. So what are the best educational apps? Monkey Preschool Lunchbox, $.99. The best news is that more great educational apps enter the market each day.

The Inventor of Dry Erase Whiteboard Paint Coating | IdeaPaint™ Buy Now We exist for one simple reason: to fundamentally improve the way people work. IdeaPaint was born from this very notion, a frustration with the way ideas were shared and coworkers collaborated. How can you think big when you write small? How can you harness the collective intelligence when it's awkward to share what's inside your own head? How can you think on your feet when you're sitting on your hands? We could see the writing on the wall. Exploration leads to discovery. IdeaPaint is proven on the walls of the world's most innovative and successful companies. IdeaPaint is more than a tool. Leave your mark™ Order a sample Link to product pages Book a presentation to learn more

The Oppenheim Toy Portfolio Posted: 2013-08-20 11:01:29 By: by Stephanie Oppenheim Here's our chat with one of the bright new stars in toyland, Goldie Blox founder Debra Sterling. SO: People always are intrigued when I tell them that I play with toys for a living, I imagine you get much the same response? DS: I always get excited when people ask me what I do for a living because it inevitably raises eyebrows (in a good way). SO: How did you become interested in toys? SO: Your focus is getting girls to build. SO: Having an idea and getting it to market are two different things. SO: Were you surprised by the overwhelming support you received on Kickstarter? SO: From my point of view - in an ideal world boys and girls would play with the same toys. SO: As a child did you play with mostly pink toys? SO: Once you've conquered building sets for girls, are you going to include sets for boys? SO: What's your favorite ice cream flavor?

Popplet Stockholm International Preschool List: Nov 2012 | Your Living City Choosing the right preschool for your child is a huge consideration anywhere, but the choice can be even trickier when you’re not on home turf. International schools are often a great option for parents who plan on staying for only a short term or where one parent has a language that is not Swedish. They have the ability to accommodate a diverse community of children who will attend from up to a few months to a number of years. We have compiled a list of all Stockholm’s international preschools in alphabetical order. Almost all the schools listed teach in English or another European language, but most of them use the Swedish curriculum. To make it easier for readers, we have indicated what language each school uses. If we have missed anything or if any information needs to be updated, please let us know. You may also like: Map of Stockholm’s International Preschools Click on the map’s blue flags for the school’s name and information. View Stockholm International Preschools in a larger map

A Novel Mechanism Regulating Stress is Identified Neuroscience researchers from Tufts identify potential target for drug therapy for wide range of disorders associated with stress Neuroscience researchers from Tufts have demonstrated, for the first time, that the physiological response to stress depends on neurosteroids acting on specific receptors in the brain, and they have been able to block that response in mice. This breakthrough suggests that these critical receptors may be drug therapy targets for control of the stress-response pathway. This finding may pave the way for new approaches to manage a wide range of neurological disorders involving stress. The stress-control pathway, more technically known as the Hypothalamus-Pituitary-Adrenal (HPA) axis, determines the levels of cortisol and other stress hormones in the human body. “We have identified a novel mechanism regulating the body’s response to stress by determining that neurosteroids are required to mount the physiological response to stress.

Napoleon Hill's 17 Principles of Personal Achievement - SUCCESS magazine Whatever the mind can conceive and believe, the mind can achieve. Lesson 1: Definiteness of Purpose Definiteness of purpose is the starting point of all achievement. Without a purpose and a plan, people drift aimlessly through life. Related: Answer 6 Questions to Reveal Your Life Purpose Lesson 2: Mastermind Alliance The Mastermind principle consists of an alliance of two or more minds working in perfect harmony for the attainment of a common definite objective. Lesson 3: Applied Faith Faith is a state of mind through which your aims, desires, plans and purposes may be translated into their physical or financial equivalent. Lesson 4: Going the Extra Mile When you go the extra mile, the Law of Compensation comes into play. Going the extra mile is the action of rendering more and better service than that for which you are presently paid. Lesson 5: Pleasing Personality Personality is the sum total of one’s mental, spiritual and physical traits and habits that distinguish one from all others.

Tolstoy’s Reading List: Essential Books for Each Stage of Life by Maria Popova Even if one could never “finish” great literature, one has to begin somewhere. Shortly after his fiftieth birthday, Leo Tolstoy succumbed to a deep spiritual crisis and decided to pull himself out by finding the meaning of life. He did so largely by reading voraciously across the world’s major philosophical and religious traditions, discovering great similarities in how they dealt with the truth of the human spirit. He was also, as any great writer, an insatiable reader of literature, which he wove together into A Calendar of Wisdom — the proto-Tumblr he spent the final decades of his life assembling. But despite his wide and prolific reading, Tolstoy did consider specific books especially important and influential in his development. That only two known women figure in Tolstoy’s list is, one would imagine, less a function of his bias than of his era’s and his culture’s — though the latter certainly shape the former. “Great”: “V. great”: “Enormous”: The novels of Mrs.