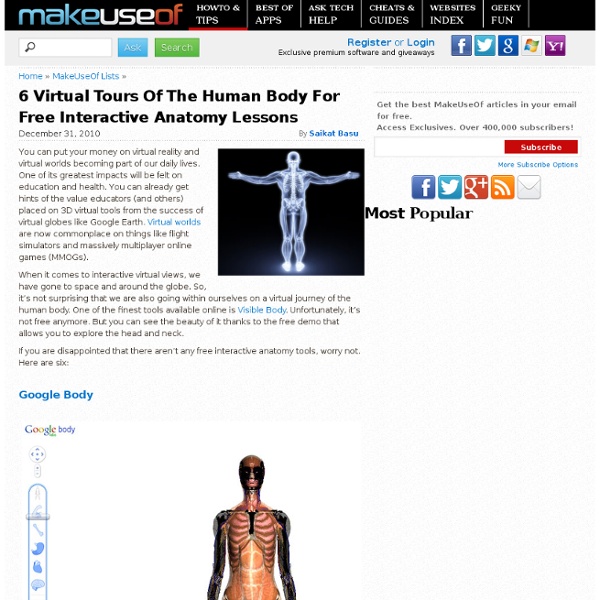 When it comes to interactive virtual views, we have gone to space and around the globe. So, it’s not surprising that we are also going within ourselves on a virtual journey of the human body. One of the finest tools available online is Visible Body. Unfortunately, it’s not free anymore. But you can see the beauty of it thanks to the free demo that allows you to explore the head and neck. If you are disappointed that there aren’t any free interactive anatomy tools, worry not. Google Body You can trust Google to take you everywhere. The Google Body browser is a Google Labs project that renders on Google Chrome and any other browser that supports WebGL (like Firefox 4 Beta). MEDtropolis The interactive website aims to educate entertain both kids and adult on bodily health; understanding the human anatomical structure is just part of the process. For instance, check out the narrated tours on Virtual Body. eSkeletons eSkeletons isn’t only about understanding human anatomy. DirectAnatomy

50 Really Cool Online Tools for Science Teachers A 21st-century education revolves around the Internet for everything from collaboration, tools, lessons, and even earning degrees online. If you are looking for ways to integrate online learning into your science class or science degree programs, then take a look at these cool online tools that are just perfect for both teachers and students. Science Tools to Use with Students These tools offer opportunities for learning about climate, cells, the human body, nature, and more. OnLineLabs ChemLab There is a fee for this one, but it is well worth the price! They are truly interactive and you can design your own simulations! Go to the downloads page for a free evaluation trial Dartmouth ChemLab This site has some very good interactive virtual labs plus a terrific interactive periodic table!

Your Amazing Bran The first stop on the virtual brain tour takes a look at the three main parts of the brain, the cerebral cortex, the cerebellum and the brain stem. It also explores the four brain lobes: the frontal lobe, the parietal lobe, the temporal lobe and the occipital lobe. The first part of the brain to evolve some 500 million years ago was the brain stem. It is also known as the reptilian brain or lower brain. Certain ‘hardwired’ body functions e.g., breathing and blood pressure, as well as some basic human instincts like danger are controlled by the lower brain. The cerebellum evolved about 400 million years ago and is also known as the hind brain.

Neurological Control - Neurotransmitters Neurotransmitter Molecules Neurotransmitters can be broadly split into two groups – the ‘classical’, small molecule neurotransmitters and the relatively larger neuropeptide neurotransmitters. Within the category of small molecule neurotransmitters, the biogenic amines (dopamine, noradrenaline, serotonin and histamine) are often referred to as a discrete group because of their similarity in terms of their chemical properties. Click on the links in the table above to read more about some of the important neurotransmitters. Serotonin Newton's Laws of Motion The motion of an aircraft through the air can be explained and described by physical principals discovered over 300 years ago by Sir Isaac Newton. Newton worked in many areas of mathematics and physics. He developed the theories of gravitation in 1666, when he was only 23 years old. Some twenty years later, in 1686, he presented his three laws of motion in the "Principia Mathematica Philosophiae Naturalis." The laws are shown above, and the application of these laws to aerodynamics are given on separate slides. Newton's first law states that every object will remain at rest or in uniform motion in a straight line unless compelled to change its state by the action of an external force.