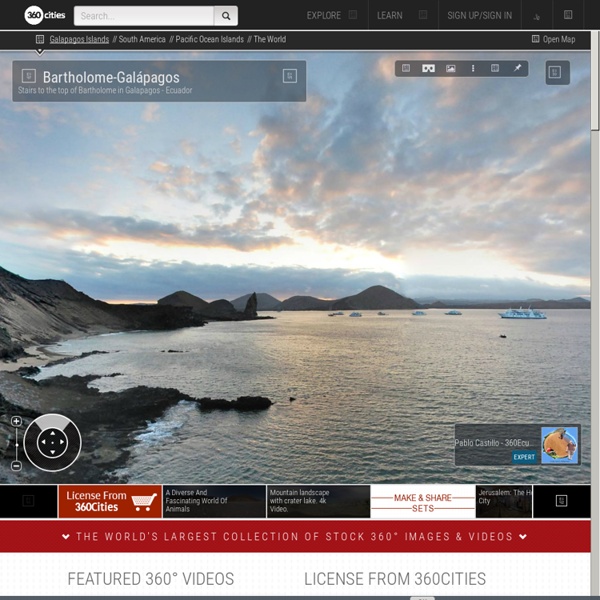 Editors' Picks Check out our newest extraordinary panoramas, hand-picked by our staff and published by the best photographers in the world every day on 360Cities. Take a look... View the 360Cities World Map We are the web's largest and fastest growing collection of interactive panoramic images from around the world. Take a look...

5 BEST Virtual Field Trips Become a Teacher >> Browse Articles >> Online Learning Featured Author: Mrs. Kelly Tenkely Panoramic Earth Earth is unique in the solar system for the known capacity to support life. It is only in the last 60 years that we have been able to see what the earth looked like as a planet, revealing our Blue Marble covered by oceans and clouds. Fragile, beautiful and Home to thousands of species of plants, animals and some 6.4 billion humans. Within Panoramic Earth you will find a growing collection of 360° panoramas showing various parts of the world, from the cities to countryside, mountain tops to caves, rivers to oceans and jungle to desert. These images, provided by both amateur and professional photographers, provide a virtual tour of many popular travel destinations and beautiful places.

Virtual Tour of Jerusalem Intercative 360 degree panoramic virtual tours at the holy city Jerusalem, Israel All rights reserved © Ittay Bodell, Digital Panovisions World of Facial Averages: East-Southeast Asia & Pacific Islander Average Mainland Han Chinese Male Average Mainland Han Chinese Woman Average Korean Man Average Korean Woman Average Japanese Man Average Japanese Woman HopeFaithPrayer Nothing builds your faith faster than speaking God’s Word to yourself. It is not just mindlessly saying something over and over again – this is the Word of God. It is spirit and it is life! Librarian in Cute Shoes: Making the Most of Mystery Skype Any Skype session is a special event in our classroom, no matter how many times we schedule one. Whether it be an author Skype, a visit with a teacher traveling faraway, or meeting old friends to celebrate WRAD, my students enjoy making connections. It's my way of bringing the world to my classroom. But Mystery Skypes are something different altogether. It's a live puzzle. It's a real-world interactive.

Air Pano - 360° - Panorama Bromo volcano, Java, Indonesia Wayag Island, Raja Ampat, Indonesia Antarctic expedition of AirPano, Part I Volcano Klyuchevskaya Sopka, Kamchatka, Russia, 2015 Dubai, UAE Iceland, the best aerial panoramas New 7 Wonders of the World Petra, Jordan Great Wall of China Grand tour of Moscow, Russia Barcelona, Spain Everest, Himalayas, Nepal, Part II, December 2012 Santorini (Thira), Oia, Greece Plosky Tolbachik Volcano, Kamchatka, Russia, 2012 Iguazu Falls, Argentina-Brazil. Ephesus - Guide, Pictures, Tours, 360 degree Virtual Tours Ephesus - (Show on the Map) - The ruins of Ephesus take on a value and a special significance among the numerous sites of an archaeological interest. This is due to its inestimable artistic patrimony, its titanic heritage of history and culture, and the inexhaustible beauty and charm of its archaeological site. The original site of Ancient Ephesus was most likely established on the Aegean coast, on the shores of that sea which today is located 8 km. away from the archaeological excavations. Over the centuries, in fact, the rubble brought onto the plain of the "Kucuk Menderes" has enlarged the alluvial plain surrounding the archaeological zone, leaving behind in actual fact the shores of the Aegean. In Roman times it was situated on the northern slopes of the hills Coressus and Pion and south of the Cayster (Kucuk Menderes) River, the silt from which has since formed a fertile plain but has caused the coastline to move ever farther west.

Artist Paints World Leaders on the Toilet… Just when you thought you’d seen it all, Italian artist Cristina Guggeri comes along and blows it out of the water with her latest series called Il Dovere Quotidiano, or “The Daily Duty”. In this series, Guggeri sets out to ‘humanize’ the world’s leaders by imaging what they might look like on the toilet. And she’s got the interwebs all aflutter. Cattolico Multimedia fax : (08) 9328 2833 phone : (08) 9422 7912 address : 40/A mary st, highgate wa 6003 Page Not Found Sorry, but the Page or Article you have been looking for could not be found. It is recommended that you use the Search Box above or Try the Links below: