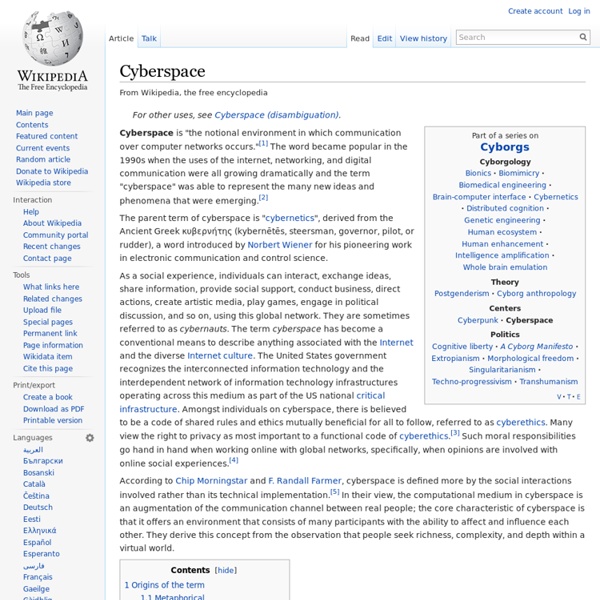 Cyberspace is "the notional environment in which communication over computer networks occurs."[1] The word became popular in the 1990s when the uses of the internet, networking, and digital communication were all growing dramatically and the term "cyberspace" was able to represent the many new ideas and phenomena that were emerging.[2] The parent term of cyberspace is "cybernetics", derived from the Ancient Greek κυβερνήτης (kybernētēs, steersman, governor, pilot, or rudder), a word introduced by Norbert Wiener for his pioneering work in electronic communication and control science. As a social experience, individuals can interact, exchange ideas, share information, provide social support, conduct business, direct actions, create artistic media, play games, engage in political discussion, and so on, using this global network. According to Chip Morningstar and F. Origins of the term[edit] Cyberspace. [edit] In this silent world, all conversation is typed. Virtual environments[edit] [edit]

History of the Internet The history of the Internet begins with the development of electronic computers in the 1950s. Initial concepts of packet networking originated in several computer science laboratories in the United States, Great Britain, and France. The US Department of Defense awarded contracts as early as the 1960s for packet network systems, including the development of the ARPANET (which would become the first network to use the Internet Protocol.) The first message was sent over the ARPANET from computer science Professor Leonard Kleinrock's laboratory at University of California, Los Angeles (UCLA) to the second network node at Stanford Research Institute (SRI). Access to the ARPANET was expanded in 1981 when the National Science Foundation (NSF) funded the Computer Science Network (CSNET). Precursors The telegraph system is the first fully digital communication system. Three terminals and an ARPA A pioneer in the call for a global network, J. Packet switching Networks that led to the Internet

Manuel Castells's Network Society | geof Castells is a professor of urban geography at Berkley. He has written a number of books and articles about geography, the city, and the information society, including a three-volume analysis of contemporary capitalism, titled The Information Age. Garnham (2004, p. 165) refers to this as “the most sophisticated version” of the theory of the information society. Castells' analysis involves economic, social, political, and cultural factors. The Network Society Castells (2000a; 2000b) claims that we are passing from the industrial age into the information age. According to Castells, power now rests in networks: “the logic of the network is more powerful than the powers of the network” (quoted in Weber, 2002, p. 104). Capital and Labor Castells distinguishes the terms “information” and “informational”. Despite the disappearance of capitalists and the proletariat, exploitation and differentiation remain. Flows vs. In opposition to the space of flows is the space of places. Conclusion Notes

Network society The term network society describes several different phenomena related to the social, political, economic and cultural changes caused by the spread of networked, digital information and communications technologies. A number of academics (see below) are credited with coining the term since the 1980s and several competing definitions exist. The intellectual origins of the idea can be traced back to the work of early social theorists such as Georg Simmel who analyzed the effect of modernization and industrial capitalism on complex patterns of affiliation, organization, production and experience. Origins[edit] The term network society, nettsamfunn, was coined in Norwegian by Stein Braten in his book Modeller av menneske og samfunn (1981). Van Dijk defines the network society as a society in which a combination of social and media networks shapes its prime mode of organization and most important structures at all levels (individual, organizational and societal). Manuel Castells[edit]

Manuel Castells Manuel Castells (Spanish: Manuel Castells Oliván; born 1942) is a Spanish sociologist especially associated with research on the information society, communication and globalization. The 2000–09 research survey of the Social Sciences Citation Index ranks him as the world’s fifth most-cited social science scholar, and the foremost-cited communication scholar.[1] He was awarded the 2012 Holberg Prize,[2] for having "shaped our understanding of the political dynamics of urban and global economies in the network society Life[edit] Manuel Castells was raised primarily in La Mancha but he moved to Barcelona, where he studied Law and Economics. "My parents were very good parents. Castells was politically active in the student anti-Franco movement, an adolescent political activism that forced him to flee Spain for France. In 1979, the University of California, Berkeley appointed him as Professor of Sociology, and Professor of City and Regional Planning. Work[edit] Publications[edit] Pertinent papers

Postmodern Theory - Chapter 3: Deleuze and Guatari Chapter 3: Deleuze and Guattari: Schizos, Nomads, Rhizomes We live today in the age of partial objects, bricks that have been shattered to bits, and leftovers... We no longer believe in a primordial totality that once existed, or in a final totality that awaits us at some future date (Deleuze and Guattari 1983: p.42) A theory does not totalize; it is an instrument for multiplication and it also multiplies itself... Gilles Deleuze and Felix Guattari have embarked on postmodern adventures that attempt to create new forms of thought, writing, subjectivity, and politics. Their most influential book to date, Anti-Oedipus (1983; orig. 1972) is a provocative critique of modernity's discourses and institutions which repress desire and proliferate fascists subjectivities that haunt even revolutionary movements. Deleuze is a professor of philosophy who in the 1950s and 1960s gained attention for his studies of Spinoza, Hume, Kant, Nietzsche, Bergson, Proust and others.

Rhizome (philosophy) "As a model for culture, the rhizome resists the organizational structure of the root-tree system which charts causality along chronological lines and looks for the original source of 'things' and looks towards the pinnacle or conclusion of those 'things.' A rhizome, on the other hand, is characterized by 'ceaselessly established connections between semiotic chains, organizations of power, and circumstances relative to the arts, sciences, and social struggles.' Rather than narrativize history and culture, the rhizome presents history and culture as a map or wide array of attractions and influences with no specific origin or genesis, for a 'rhizome has no beginning or end; it is always in the middle, between things, interbeing, intermezzo.' The planar movement of the rhizome resists chronology and organization, instead favoring a nomadic system of growth and propagation. Deleuze, Gilles and Félix Guattari. 1980. A Thousand Plateaus.

Gilles Deleuze Gilles Deleuze (French: [ʒil dəløz]; 18 January 1925 – 4 November 1995) was a French philosopher who, from the early 1960s until his death, wrote influentially on philosophy, literature, film, and fine art. His most popular works were the two volumes of Capitalism and Schizophrenia: Anti-Oedipus (1972) and A Thousand Plateaus (1980), both co-written with Félix Guattari. His metaphysical treatise Difference and Repetition (1968) is considered by many scholars to be his magnum opus.[2] Life[edit] Deleuze was born into a middle-class family in Paris and lived there for most of his life. Deleuze taught at various lycées (Amiens, Orléans, Louis le Grand) until 1957, when he took up a position at the Sorbonne. In 1969 he was appointed to the University of Paris VIII at Vincennes/St. Deleuze himself found little to no interest in the composition of an autobiography. "What do you know about me, given that I believe in secrecy? Philosophy[edit] [edit] Epistemology[edit] Values[edit]

Graham Harman Graham Harman (born May 9, 1968) is a professor at the American University in Cairo, Egypt. He is a contemporary philosopher of metaphysics, who attempts to reverse the linguistic turn of Western philosophy. Harman is associated with Speculative Realism in philosophy, which was the name of a workshop that also included the philosophers Ray Brassier, Iain Hamilton Grant, and Quentin Meillassoux.[2] Biography[edit] Thought[edit] Central to Harman's philosophy is the idea that real objects are inexhaustible: "A police officer eating a banana reduces this fruit to a present-at-hand profile of its elusive depth, as do a monkey eating the same banana, a parasite infecting it, or a gust of wind blowing it from a tree. Harman defines real objects as inaccessible and infinitely withdrawn from all relations and then puzzles over how such objects can be accessed or enter into relations: "by definition, there is no direct access to real objects. Bibliography[edit] See also[edit] References[edit]

Actor–network theory Broadly speaking, ANT is a constructivist approach in that it avoids essentialist explanations of events or innovations (e.g. explaining a successful theory by understanding the combinations and interactions of elements that make it successful, rather than saying it is “true” and the others are “false”). However, it is distinguished from many other STS and sociological network theories for its distinct material-semiotic approach. Background and context[edit] ANT appears to reflect many of the preoccupations of French post-structuralism, and in particular a concern with non-foundational and multiple material-semiotic relations. Many of the characteristic ANT tools (including the notions of translation, generalized symmetry and the “heterogeneous network”), together with a scientometric tool for mapping innovations in science and technology (“co-word analysis”) were initially developed during the 1980s, predominantly in and around the CSI. A material-semiotic method[edit] Translation[edit]

Bruno Latour Bruno Latour (/ləˈtʊər/; French: [latuʁ]; born 22 June 1947) is a French philosopher, anthropologist and sociologist.[3] He is especially known for his work in the field of science and technology studies (STS).[4] After teaching at the École des Mines de Paris (Centre de Sociologie de l'Innovation) from 1982 to 2006, he became Professor at Sciences Po Paris (2006–2017), where he was the scientific director of the Sciences Po Medialab. He retired from several university activities in 2017.[5] He was also a Centennial Professor at the London School of Economics.[6][7] Latour's monographs earned him a 10th place among most-cited book authors in the humanities and social sciences for the year 2007.[10] Biography[edit] As a student, Latour originally focused on philosophy and was deeply influenced by Michel Serres. Awards and honors[edit] Holberg Prize[edit] A 2013 article in Aftenposten by Jon Elster criticised the conferment to Latour, by saying "The question is, does he deserve the prize