How to hire a programmer to make your ideas happen 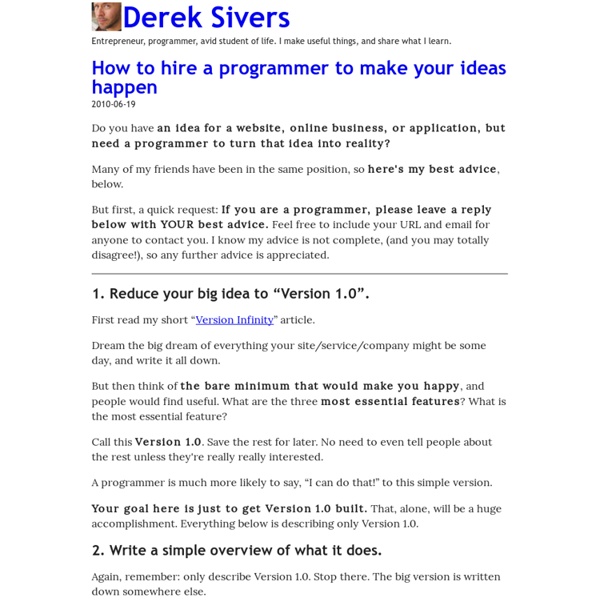 Do you have an idea for a website, online business, or application, but need a programmer to turn that idea into reality? Many of my friends have been in the same position, so here's my best advice, below. But first, a quick request: If you are a programmer, please leave a reply below with YOUR best advice. Feel free to include your URL and email for anyone to contact you. I know my advice is not complete, (and you may totally disagree!), so any further advice is appreciated. 1. First read my short “Version Infinity” article. Dream the big dream of everything your site/service/company might be some day, and write it all down. But then think of the bare minimum that would make you happy, and people would find useful. Call this Version 1.0. A programmer is much more likely to say, “I can do that!” Your goal here is just to get Version 1.0 built. 2. Again, remember: only describe Version 1.0. Leave off all details that the programmer doesn't need to know. Be succinct. 3. 4. 5. 6. 7. 8.

How to make Angry Birds – part 1 Hello and welcome back to my blog! This time I’m going to try something new. There are many tutorials for various techniques and tricks on the web, but what you don’t often see is one that takes you through the development of a game, step by step from start to finish. This is what I’m going to attempt here. I hope that it will provide some missing insight into the components that actually make up a working game and how to go about developing them. I’m going to assume the reader is familiar with the basics of game development and I’m going to concentrate on the art and programming. Angry Birds So, the game I’m going to be making is to be based on the extremely popular Angry Birds by Rovio, a AAA title which cost some $140k USD to make. Angry Birds Obviously, since its just me making this I will have to take a few short-cuts and will be concentrating on the core part of the game. Cloning Analysis Ok, lets have a look at the requirements for a bare-bones version of the game: Graphics Code Camera

TechCrunch - The latest technology news and information on startups words you can&#039;t say in sales January 2013 | A couple of years ago I wrote an article titled, ‘I Wish I’d Said That: Seven sentences to get you out of sticky situations.’ Just as there are words you can employ to helpful means, there are also words that you should avoid to keep you out of trouble and in control of the buy-sell relationship. Here are seven of them. Seven Words You Can’t Say in Business Development Obviously, the words themselves are harmless and only become problematic when used in certain context. 1. Such a harmless word, you, but using it incorrectly can cause immediate credibility loss that is almost impossible to win back. The problematic use of this innocent word is speaking to an as-yet unqualified target audience, particularly in written form. “[agency] is a strategic marketing services agency that does just one thing—helps you grow your business.” Really? “From strategic market planning to brand strategy, from lead generation to internet marketing services, we get you to your goals.” 2. 1. 2. 3.

So you want to be a consultant...? Or: Why work 8 hours/day for someone else when you can work 16 hours/day for yourself? I've been a consultant of one form or another since 1985 when I started my old company, V-Systems, with a friend from college, and actually did bits and pieces of consulting as early as 1982. I have been asked often about the business, and I decided to write this up. Please note that I am providing observations from my own personal experience, but I am not providing tax or legal advice. You need to pay somebody for that, and I'm not qualified. Furthermore, I am not even attempting to make this a comprehensive guide for everything required by one in or contemplating the consulting business. These sections (except the last) aren't in any particular order. There are many ways of structuring a self-employed practice, and I'll touch on two that are at different ends of the spectrum. Contracting Consulting Consulting maxim: You must give the customer The Warm Fuzzy Feeling™ Anecdote: Have "customers", not "clients"

How Three Germans Are Cloning the Web A purple rooster sculpture made from recycled grape Fanta bottle labels. Clocks designed to hang in corners. Bauhaus posters from the 1920s. Hand-painted vintage typewriters. These are some of the carefully curated objects for sale on Fab.com, the fast-growing flash-deal site for designer goods. Launched out of a loft in New York City’s Garment District last June, Fab had sales of $20 million in its first six months and is on track to earn $100 million in 2012. Six months after Fab launched, it was knocked off. Fab vs. Bamarang is the creation of Oliver, Marc, and Alexander Samwer, a trio of German brothers who have a wildly successful business model: Find a promising Internet business, in the U.S., and clone it internationally. The Samwers’ base of operations is a startup accelerator in Berlin called Rocket Internet. Groupon (GRPN) got cloned by the Samwers two years ago, and the results were expensive for the daily-deal site. EBay’s business model appealed to them from the start.

Mickey Mouse, amphetamine shill In the 1950s, speed was legally sold as "pep pills" to help improve your mood and vigor, and Mickey Mouse got in the act with a series of strips in which Mickey pimped amphetamine to kids and grownups who needed a little pick-me-up. Mickey Mouse on Speed (via IO9) Reserve Bank of India (RBI): Why can't Indian government pay world bank loan by just printing money?

Anatomy of a feature “Oh, it’s easy, just a quick http call. I could write a script to do it in like 20 seconds.” I recently added a pretty easy feature to NetNewsWire — a Send to Instapaper command. It really is just a quick http call to the Instapaper server to add a URL to the Read Later list. Piece of cake. But of course it’s not as simple as just writing a quick script. Decisions It’s not enough just to write the basic functionality and add a menu item that runs it. Should it support multiple Instapaper accounts? This would complicate the feature. And we’d have to include some UI for creating, adding, deleting, and editing your Instapaper accounts, which would require a whole new screen, probably in the Preferences window. I’m willing to bet that most people who use Instapaper use just one account, or at least are willing to use just one account when saving from NetNewsWire. But! While a person may have just one account, they might change that one account some day. Should there be a toolbar item? Tough call.