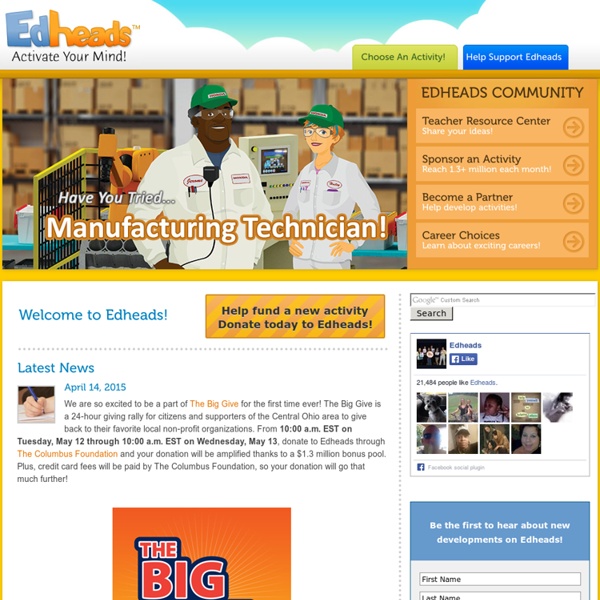 Exploratorium: the museum of science, art and human perception Search, Collect, and Share | SMILE 6 Virtual Tours Of The Human Body For Free Interactive Anatomy Lessons When it comes to interactive virtual views, we have gone to space and around the globe. So, it’s not surprising that we are also going within ourselves on a virtual journey of the human body. One of the finest tools available online is Visible Body. Unfortunately, it’s not free anymore. But you can see the beauty of it thanks to the free demo that allows you to explore the head and neck. If you are disappointed that there aren’t any free interactive anatomy tools, worry not. Google Body You can trust Google to take you everywhere. The Google Body browser is a Google Labs project that renders on Google Chrome and any other browser that supports WebGL (like Firefox 4 Beta). MEDtropolis The interactive website aims to educate entertain both kids and adult on bodily health; understanding the human anatomical structure is just part of the process. For instance, check out the narrated tours on Virtual Body. eSkeletons eSkeletons isn’t only about understanding human anatomy. DirectAnatomy

WERC Projects - California Sea Otter Surveys and Research Sea otter research by scientists at the Santa Cruz Field Station of the USGS Western Ecological Research Center (WERC) focuses on this smallest marine mammal’s population biology and its role as a keystone species in the nearshore marine community. WERC scientists conducting long-term research in California and Alaska seek to answer complex ecological questions. How do sea otters impact near-shore marine food webs? Why is California’s threatened sea otter population is growing so slowly? What are the consequences of the rapid sea otter decline in the Aleutian Islands? Browse the menu to learn about sea otter biology and the annual California sea otter population survey.

Statue of Liberty National Monument - Virtual Tour Want to know what's going on inside the Statue of Liberty's head? The eTour will take you around the island and up to the crown. NPS Photo Whether you want to relive a previous visit to the Statue of Liberty, or you've never been to the park and want to get an idea of what it's like, a virtual tour is the way to go. You control your experience within the virtual tour, choosing from 360-degree panoramas, videos, pictures, and sounds. You will need to have the latest version of plugin installed on your computer. Take the Virtual Tour! This unique experience will enable a global audience with equal and unprecedented access to one of the world's best known, beloved and inspiring symbols; The statue of "Liberty Enlightening the World" (7.3mb) Please contact us if you have any problems or comments about virtual tours of the park.

TackTile 25 Awesome Virtual Learning Experiences Online - Virtual Education Websites Just because you’re online doesn’t mean that you can’t experience the world first-hand — or as close to first-hand as possible. Here are websites that feature virtual learning experiences, exposing online visitors to everything from history to geography, astronomy to anatomy, literature to government. 7 Wonders Panoramas – 360-degree views of the Seven Wonders of the World. Arounder Virtual Tour of the Moon – 360-degree panoramic views of the moon, courtesy of the Apollo 11, 12 and 17 missions. Frissiras Museum – A virtual art gallery from Athens, Greece that allows you to explore paintings by clicking through their entire collection. Google Earth – Explore the geography of both land and sea (free download). Howard Hughes Medical Institute’s Vital Signs: Understanding Cardiovascular Diseases – A virtual gallery teaching about heart disease. Louvre Virtual Tour – Virtual tour of the world-famous Louvre museum in Paris. Mount St. Supreme Court Tour – A 360-degree exploration of the U.S.

Encyclopedia of Earth Explore Ancient Egypt Explore Ancient Egypt With 360-degree and other imagery, walk around the Sphinx, enter the Great Pyramid, visit tombs and temples, and more. Want to walk around the Sphinx? Clamber inside the Great Pyramid of Giza and seek out the pharaoh's burial chamber? Visit the magnificent tombs and temples of ancient Thebes? In this multi-layered, highly visual interactive, view 360° panoramas, "walkaround" photos, and other breathtaking imagery shot throughout the Giza Plateau and ancient Thebes (modern-day Luxor), often with special permission. View From Top You are now standing atop Khufuí­s Pyramid, 45 stories above the Giza Plateau. Other things to look for as you navigate around the summit are the Sphinx, Khufu's three Queens' Pyramids, greater Cairo, and—hard to miss—Khafre's Pyramid. Descending Passage Subterranean Chamber Do you see the small grated opening across the room from the entrance? Ascending Passage Okay, let's begin. Grand Gallery (Lower) "Queen's Chamber" Grand Gallery (Upper) Sphinx

Science4All Napoleon: Interactive Battle Simulator Game Instructions To play the Waterloo Interactive Battle Simulator, you must first choose whether to play as Napoleon (French side) or as Wellington (Allied side). The computer will play as your opponent. The game is played as a series of situations. The exact number of situations required to complete the game will vary, but expect to play about eight or so to finish the game. The game begins with an Overview screen which will set the stage for the game. You then proceed to the first situation. On each Situation screen, the general situation at that point in the battle will be described, and a map will show the positions of the various armies, using the following icons: Allied Forces British — these forces are under the control of Wellington. On the Decision screen, you will be given several battle strategies to choose from. At the same time you are making your decision, the computer, playing as your opponent, will make a decision for the other side. Winning the Game