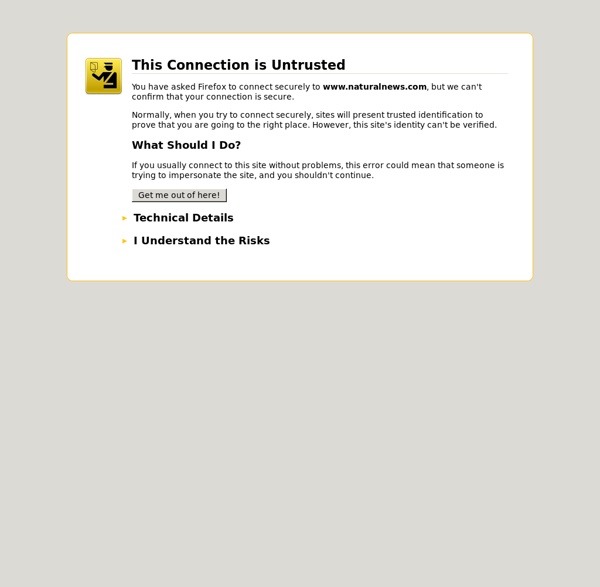 This site is part of the Natural News Network © 2014 All Rights Reserved. Privacy | Terms All content posted on this site is commentary or opinion and is protected under Free Speech. Truth Publishing International, LTD. is not responsible for content written by contributing authors. The information on this site is provided for educational and entertainment purposes only. It is not intended as a substitute for professional advice of any kind. Truth Publishing assumes no responsibility for the use or misuse of this material.

NBC Affiliate KMIR Reports on Chemtrails/Geoengineering KMIR, the NBC affiliate in Palm Springs, CA has recently aired a segment on chemtrails/geoengineering. I picked up the coverage at the kaua’i sky blog. Here is a great opportunity for some Quantum Activism. #3038363 SOPA Emergency IP list: So if these ass-fucks in DC decide to ruin the internet, here’s how to access your favorite sites in the event of a DNS takedown tumblr.com 174.121.194.34 wikipedia.org 208.80.152.201 How much of Canadian Cancer Society’s research budget is wasted on the terminally flaky? New advertising effort promotes complimentary and alternative therapies. The Canadian Cancer Society has undertaken a major new fund-raising campaign called Join the Fight complete with a new, very nice website at fightback.ca. The campaign was introduced through a full page ad in the December 8, 2009 edition of the Calgary Herald. Roughly a third of the ad was dedicated to the work that is being done in the field of complementary and alternative medicine. Highlighting research funded by the Canadian Cancer Society, the headline read: Research team explores impact of complementary cancer treatments.

Eye Movement and Lying - How to detect lies Interesting Info -> Lying Index -> Eye Direction & Visual Accessing Cues Eye Movement and Direction & How it Can Reveal Truth or Lies This is a continuation of our previous article Detecting Lies. David H. Gorski, MD, PhD – Managing Editor David H. Gorski, MD, PhD, FACS is a surgical oncologist at the Barbara Ann Karmanos Cancer Institute specializing in breast cancer surgery, where he also serves as the Medical Director of the Alexander J. Walt Comprehensive Breast Center and Cancer Liaison Physician for the American College of Surgeons Committee on Cancer. Despite its efforts, even Whole Foods cannot keep GMOs out of the products it sells (correction) (NaturalNews) Genetically modified foods have become so ubiquitous in the US that even the grocery store 'Whole Foods' now admits it cannot keep biotech foods off its shelves. A representative for the corporation acknowledged in May of 2011 that the realities of the marketplace have forced a shift in the company's previous no-GMO's policy. (Correction note: The original title of this article has been altered to better reflect the accuracy of this story. As a clarification, Whole Foods does take steps to avoid GMO ingredients, but due to the massive use of genetically engineered ingredients in the food supply, it is currently impossible to avoid GMOs in conventional or "natural" products. As a result, many food products sold at Whole Foods do, in fact, contain genetically engineered ingredients, even when Whole Foods would prefer they didn't.) Sources for this article include:

President Obama Signs Indefinite Detention Bill Into Law December 31, 2011 CONTACT: media@dcaclu.org WASHINGTON – President Obama signed the National Defense Authorization Act (NDAA) into law today. 72 Page Document Shows Merck Paid Doctors at Least $18,810,495.52 Merck pays big money to doctors for speaking about their products. Sometimes gems are difficult to come by. However, when we find them, just clean them up a bit and we can appreciate their ‘real value’. The little treasure I discovered was a document located on Merck Pharmaceutical’s website. It disclosed how much Merck paid doctors as speaking fees in the third and fourth quarter of 2009 alone.