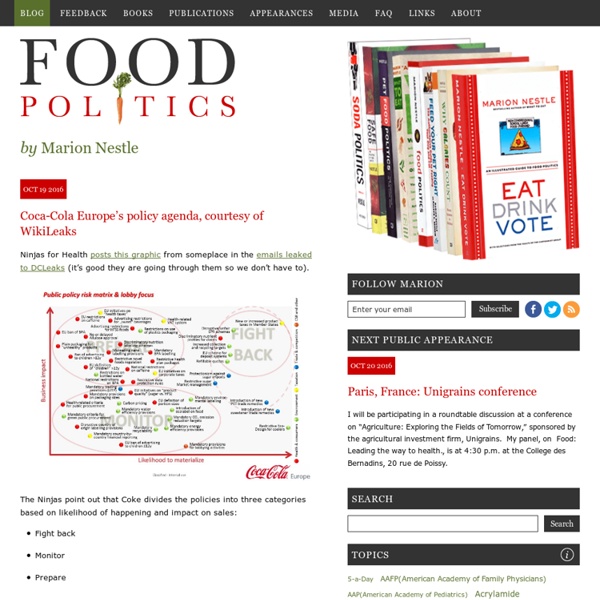 When Walmart announced last week that it would start carrying Wild Oats organic foods at prices at least 25% below those of national brand organics, I had some conflicted reactions. Walmart’s rationale sounds terrific: We know our customers are interested in purchasing organic products and, traditionally, those customers have had to pay more,” said Jack Sinclair, executive vice president of grocery at Walmart U.S. “We are changing that and creating a new price position for organic groceries that increases access. This is part of our ongoing effort to use our scale to deliver quality, affordable groceries to our customers. But Reuters explains what this is really about:

3 things from the Sustainability Report 2014 that we need to talk about As the corporate social and environmental responsibilities increase, sustainability does matter for businesses in terms of corporate management. To communicate its efforts for sustainable management and the performance with people, Samsung Electronics has been publishing the Sustainability Report since 2008. ▲Three constituent parts of Sustainable Development (Source: Wikipedia) Fooducate This is a guest post by Fooducate community member Glitchtastic. I've recently lost 20 pounds. People ask me how I did it. I’d love to tell you that I was sitting around one day inspired to get up and get fit, but unfortunately that is not how it happened. On July 20th, my fiancé was diagnosed with Type 2 diabetes.

BLOG - Nutrition Dimension (Content sponsored by Boston University) By Julie Stefanski MEd, RDN, CSSD, LDN, CDE Active in competitive sports, 16-year-old Sara was headed to volleyball practice when the abdominal pain became too much. A bowel obstruction related to undiagnosed Crohn’s disease led to her first small bowel resection. A little more than a year later, adhesions from the first surgery along with progression of her inflammatory bowel condition led to a second bowel obstruction. This time the significant necrotic tissue required removal of more than 60% of her remaining intestine.

What Should We Know About Foreign Genes In Our Food? Bacteria on bean leaf. In a recent email exchange about the merits of mandatory “GMO labeling,” I was asked this question: “Why shouldn’t we be able to know what foreign genes are in our food?” It seems like a reasonable question to most people. After all, we are the customers; don’t we have a right to know what we want to know? Samsung is urgently looking into the recent child labor allegations and will adhere to its zero-tolerance policy At Samsung Electronics, we deeply care about the health and safety of all our employees and employees at our suppliers, and strictly maintain a zero tolerance policy on child labor. As part of our pledge against child labor, Samsung routinely conducts inspections to monitor our suppliers to ensure they follow our commitment. For the supplier in question, we have conducted a thorough audit in March 2013 which was followed by a third party inspection in August 2013, and yet another one in June 2014. No cases of child labor were found during these audits.We are urgently looking into the latest allegations and will take appropriate measures in accordance with our policies to prevent any cases of child labor in our suppliers.

Obesity Action Coalition » OAC Blog Is Bariatric Surgery for Me? Ask Yourself these Questions Posted on October 13th, 2016 by admin in Bariatric Surgery BlogThis Post has No CommentsTags: bariatric surgery Disclaimer: It is important to talk with your healthcare provider before making or starting any treatment decision. Practice Blog To share practice related stories, create connections and engage readers in the amazing diversity of dietitian experiences. 5 considerations for working with populations with mental illness Rachel, a dietitian in the Hamilton/Toronto area with a passion for working in mental health, shares insights from her recent practicum experiences. Rachel Hicks recently completed her Master of Public Health in Nutrition and Dietetics (formerly Community Nutrition) at the Dalla Lana School of Public Health at the University of Toronto. She is interested in many areas of nutrition on a local and global scale and has developed a passion for working with vulnerable populations in diverse communities.

Food Safety - The Science Introduction and Overview It is well-recognized that absolute safety is not an achievable goal in any human endeavor, and this reality is relevant to food and feed safety. The safe use of food or feed has typically been established either through experience, based on its common use, or in more recent times by application of generally recognized scientific assessment measures.

Blog - Sodium Breakup For good and valuable consideration, the receipt of which is hereby acknowledged, I hereby grant to the American Heart Association (“AHA”) and its successors and anyone authorized by it the following unrestricted rights and release, all of which may be exercised without geographical, time or other limitation: In regards to the submission of stories, video or digital recordings, whether of an audio or visual nature, and photographs (collectively “Submitted Material”) for use by the AHA, I hereby release the AHA from all liability, and make the following grants and representations in connection therewith: (c) I represent and warrant that the information provided to the AHA is a true and accurate account, is original, does not infringe on another’s copyright or other proprietary rights, is not defamatory and that I have full right and authority to disclose and convey the Story or provide the Photograph(s) and/or video recording to the AHA.

Evidence Stacking Up Against Biotechnology Critics Calestous Juma By Calestous Juma Critics of agricultural biotechnology have long maintained that the technology is unsuitable for small-scale farmers and harmful to the environment. But according to newly-released adoption rates, evidence is pointing in the opposite direction. In its latest report, Global Status of Commercialized Biotech/GM Crops: 2011, the International Service for the Acquisition of Agri-biotech Applications (ISAAA) shows that biotechnology crops now cover 160 million hectares worldwide. Top 50 socially responsible companies 2013 For the fifth year in a row, Maclean’s has partnered with Sustainalytics, a global leader in sustainability analysis, to select 50 leaders in corporate social responsibility–companies who know that doing good is just good business. Canada’s Top 50 Socially Responsible Companies were selected on the basis of their performance across a broad range of environmental, social, and governance indicators and rank at the top of their industry groups. Banks continue to face scrutiny for their lending and investment activities, including those related to environmentally sensitive projects. Some banks have effectively used their market power to back high-impact sustainable projects such as renewable energy. Credit unions and co-operatives are increasingly influential not only due to their prudent lending practices but also their development of local communities. Example: Vancity (Vancouver City Savings Credit Union)

The Truth About Coconut Oil - Ellie Krieger Although it’s been more than five years since coconut oil began its meteoric rise in the U.S. marketplace, the confusion about it has not waned a bit. “Should I switch to coconut oil?” is consistently one of the most common questions that come across my desktop — not surprising given that you could throw a dart at the Internet and hit a claim about the oil’s amazing healing power. Mostly, there has been a paucity of good science on it, but a meta-analysis (a systematic review of the existing research) published this year in Nutrition Reviews has shed some light on the topic. Executive Summary: Global Status of Commercialized Biotech/GM Crops: 2011 - ISAAA Brief 43-2011 Introduction This Executive Summary focuses on the 2011 biotech crop highlights, which are presented and discussed in detail in ISAAA Brief 43, Global Status of Commercialized Biotech/GM Crops: 2011. Biotech crops reached 160 million hectares, up 12 million hectares on 8% growth, from 2010, as the global population reached a historical milestone of 7 billion on 31 October 2011