Pharmaceutical pricing: The new drugs war. OF ALL the goods and services traded in the market economy, pharmaceuticals are perhaps the most contentious. 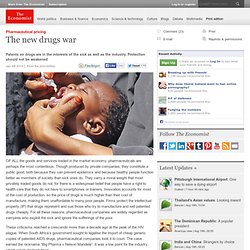 Though produced by private companies, they constitute a public good, both because they can prevent epidemics and because healthy people function better as members of society than sick ones do. They carry a moral weight that most privately traded goods do not, for there is a widespread belief that people have a right to health care that they do not have to smartphones or trainers. Chinese medical demand fuels private hospital takeovers.

Focusing on comparative health care policy in Asia - AHPP. Comparative, policy-oriented research aimed at improving health care and the overall quality of life across the Asia-Pacific region is at the heart of AHPP’s mission and activities. 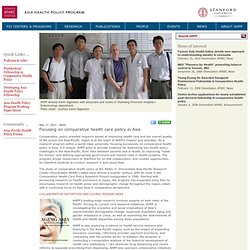 As a research program within a world-class university, focusing exclusively on comparative health policy in Asia, it is unique. AHPP aims to provide evidence for addressing key health policy challenges in the Asia-Pacific, from links between poverty and ill health, to improving “value for money” and defining appropriate government and market roles in health systems. The program brings researchers to Stanford for on-site collaboration, and creates opportunities for Stanford students to conduct research in and about Asia. The study of comparative health policy at the Walter H. Shorenstein Asia-Pacific Research Center (Shorenstein APARC) dates back almost a quarter century, with its roots in the Comparative Health Care Policy Research Project inaugurated in 1990. Collaborative initiatives and global researchers.

The Rise of the Middle Class and Why That Matters. We are living in the midst of a revolution that will profoundly change our world. 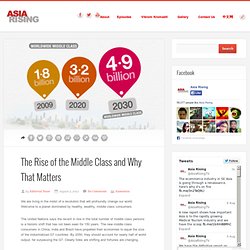 Welcome to a planet dominated by healthy, wealthy, middle class consumers. The United Nations says the recent in rise in the total number of middle class persons is a historic shift that has not been seen for 150 years. The new middle class consumers in China, India and Brazil have propelled their economies to equal the size of the industrialized G7 countries. By 2050, they should account for nearly half of world output, far surpassing the G7. Clearly tides are shifting and fortunes are changing. Travel Well - Asia Poised to Benefit From Healthy Travel Trend. New Study Reveals Wellness Tourism a $439 Billion Market, Representing 1 in 7 Tourism Dollars A new study presented at the inaugural Global Wellness Tourism Congress (GWTC) found wellness tourism is a near half-trillion dollar market, representing 14 percent of total global tourism revenues ($3.2 trillion) overall. 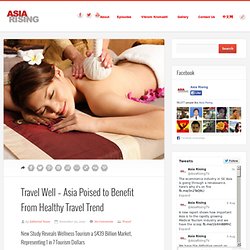 According to The Global Wellness Tourism Economy report, the category is projected to grow on average 9.9 percent annually over the next five years, nearly twice the rate of global tourism overall, reaching $678.5 billion by 2017, or 16 percent of total tourism revenues. The study also noted over one-half of growth in wellness tourism through 2017 will come from the Asian, Latin American and Middle Eastern/North African markets, and India will be number one globally over the next five years, clocking a 20 percent-plus growth through 2017.

And wellness tourists are higher spenders, on average, spending 130 percent more than the average global tourist. Special Report: Focus on Healthcare in the Philippines. Philippines has the third largest pharma market among the countries in the Association of Southeast Asian Nations (ASEAN), just after Indonesia and Thailand. 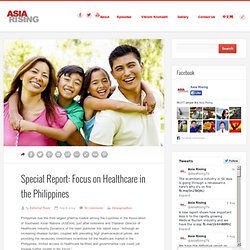 Director of Healthcare Industry Dynamics of the team publisher this report says: “Although an increasing disease burden, coupled with prevailing high pharmaceutical prices, are providing the necessary investment incentives for the healthcare market in the Philippines, limited access to healthcare facilities and governmental cuts could yet impede further growth in the future.” Furthermore, public health insurance provider Philippine Health Insurance Corporation does not cover the country’s entire population, resulting in the majority of people being unable to afford medicines. Special Report: Focus on Healthcare in Vietnam. The pharmaceutical market in Vietnam is set to increase at an impressive 15.4% CAGR to 2020 whereas the Philippines’ pharmaceutical industry will grow at 9.4% CAGR to 2020. 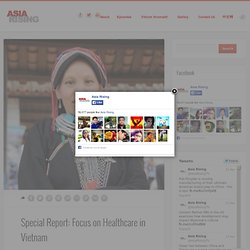 In Vietnam, the scarcity of low-priced generic drugs, combined with a belief among Vietnamese doctors that patent-protected branded drugs are more effective, means that foreign pharmaceutical companies dominate the market and are able to maintain premium revenue. In 2005, innovator drug prices in Vietnam were 8.3 times higher than international reference prices. Although 2009 saw the Vietnamese government introduce the New Health Insurance Law for universal coverage by 2020, as well as make it a legal requirement for all of its pharmaceutical production facilities to operate with Good Manufacturing Practice certificates, prospects for generic and locally-manufactured drugs remain limited.

Special Report: Focus on Healthcare in Taiwan. The Republic of China (Taiwan) has a robust and well run public healthcare scheme. 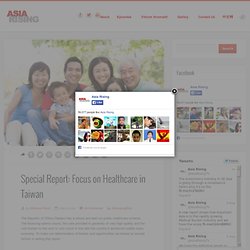 The financing seems sound, the care provided is generally of very high quality and the cost burden to the user is very much in line with the country’s advanced middle class economy. To make our determination of threats and opportunities we looked at several factors in writing this report. Working through the data, our industry research report concluded that the population of Taiwan increased slightly between 2008 and 2013 from 23.0 to 23.4 million, mainly due to rising life expectancy. However, the birth rate decreased at a negative Compound Annual Growth Rate (CAGR) of 0.04% between 2008 and 2013. Special Report: Focus on Healthcare in South Korea. Healthcare in South Korea is a good news story. 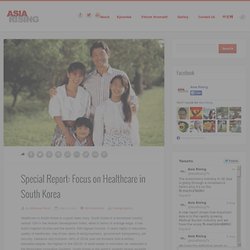 South Korea is a developed country ranked 12th in the Human Development Index, while in terms of average wage, it has Asia’s highest income and the world’s 10th highest income. It ranks highly in education, quality of healthcare, rule of law, ease of doing business, government transparency, job security, tolerance and inclusion. 64% of 25-34 year old Koreans hold a tertiary education degree, the highest in the OECD. Special Report: Focus on Healthcare in Indonesia. Healthcare in Indonesia is a complex topic because Indonesia is a complex topic. 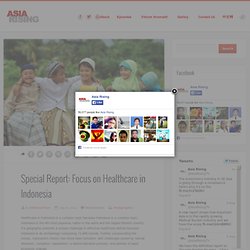 Indonesia is the 4th most populous nation in the world and the largest Muslim country. It’s geography presents a unique challenge to effective healthcare deliver because Indonesia is an archipelago comprising 13,466 islands. Further compounding the issues, Indonesia’s history has since been turbulent, with challenges posed by natural disasters, corruption, separatism, a democratization process, and periods of rapid economic change. Indonesia consists of hundreds of distinct native ethnic and linguistic groups. How Chinese Acupuncture is Helping American Women. Participation and the right to health: Lessons from Indonesia.

Sam Foster Halabi Abstract The right to participation is the “the right of rights” — the basic right of people to have a say in how decisions that affect their lives are made. 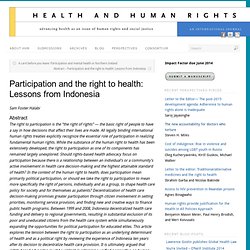 All legally binding international human rights treaties explicitly recognize the essential role of participation in realizing fundamental human rights. While the substance of the human right to health has been extensively developed, the right to participation as one of its components has remained largely unexplored. Should rights-based health advocacy focus on participation because there is a relationship between an individual’s or a community’s active involvement in health care decision-making and the highest attainable standard of health?

Introduction. Paul Krugman Says Medicaid For All, I Say Singapore. Healthcare in Singapore. Singapore has a non-modified universal healthcare system where the government ensures affordability of healthcare within the public health system, largely through a system of compulsory savings, subsidies, and price controls. Singapore's system uses a combination of compulsory savings from payroll deductions to provide subsidies within a nationalized health insurance plan known as Medisave. Within Medisave, each citizen accumulates funds that are individually tracked, and such funds can be pooled within and across an entire extended family. How To Provide Health Care To All Americans For The Price Of Medicare. It's All In The Prices. Singapore looking into key changes to 3M medicare system.

SINGAPORE, Aug. 17 (Xinhua) -- Singapore is looking into key changes to its own system to cover medical costs, which has been known as the 3M system, to keep it relevant and effective, Health Minister Gan Kim Yong said on Saturday. The 3M system, known for its efficiency, comprises Medisave, Medishield and Medifund. Medisave is a compulsory savings system, while Medishield is a low-cost basic medical insurance scheme. To fix Medicare and Social Security, look to Singapore. The result? Singaporeans have comfortable retirements. Medical tourism. Medical tourism or health tourism is the travel of people to another country for the purpose of obtaining medical treatment in that country. Traditionally, people would travel from less developed countries to major medical centers in highly developed countries for medical treatment that was unavailable in their own communities,[1][2] The recent trend is for people to travel from developed countries to third world countries for medical treatments because of cost consideration, though the traditional pattern still continues.

Another reason for travel for medical treatment is because some treatments may not be legal in the home country, such as some fertility procedures. Some people travel to obtain medical surgeries or other treatments. Some people go abroad for dental tourism or fertility tourism.[3] People with rare genetic disorders may travel to another country where treatment of these conditions is better understood. History[edit] Description[edit] Process[edit] Risks[edit] [edit] The Future of Health Care in Asia. Medical Industry Sees Opportunity in Indonesia. Hopes and fears as Indonesia rolls out universal healthcare. Humanitarian news and analysis a service of the UN Office for the Coordination of Humanitarian Affairs Millions of Indonesians stand to benefit JAKARTA, 14 January 2014 (IRIN) - The rollout of universal health coverage in Indonesia has been greeted with public enthusiasm, but health experts warn that inadequate funding could undermine the quality of care.

The government aims to have every Indonesian covered by health insurance by 2019 under a new scheme called Jaminan Kesehatan Nasional (JKN), with nearly 20 trillion rupiah (US$1.6 billion) allocated to cover premiums for the poor in 2014.