Ethiopia: Ministry Announces New Rapid HIV Test Kit Would Be Distributed. By Girmachew Gashaw The Ministry of Health announced that the new rapid HIV test kit has been released and would be distributed as fast as possible for public use. 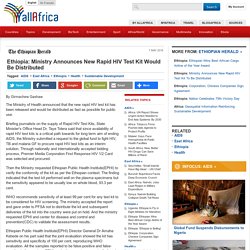 Briefing journalists on the supply of Rapid HIV Test Kits, State Minister's Office Head Dr. Taye Tolera said that since availability of rapid HIV test kits is a critical path towards for long term aim of ending AIDS, the Ministry submitted a request to the global fund to fight HIV, TB and malaria GF to procure rapid HIV test kits as an interim solution.

Through nationally and internationally accepted bidding process, Premier Media Corporation First Response HIV 1/2 Card was selected and procured. Then the Ministry requested Ethiopian Public Health Institute(EPHI) to verify the conformity of the kit as per the Ethiopian context. 54 Capital Plans Ethiopian Pharma Factory After Deal. 54 Capital, a London-based private-equity company, plans to build a new plant for Addis Pharmaceutical Factory within two years after investing $30 million in its seventh deal in Ethiopia, an executive said. 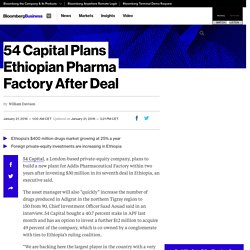 The asset manager will also “quickly” increase the number of drugs produced in Adigrat in the northern Tigray region to 150 from 90, Chief Investment Officer Saad Aouad said in an interview. 54 Capital bought a 40.7 percent stake in APF last month and has an option to invest a further $12 million to acquire 49 percent of the company, which is co-owned by a conglomerate with ties to Ethiopia’s ruling coalition. “We are backing here the largest player in the country with a very strong and motivated management team that we want to help,” Aouad said Jan. 18 in the capital, Addis Ababa. KKR, Geldof Several foreign private-equity companies are active in Ethiopia. APF plans to increase existing capacity usage from 30 percent and start to produce injectable treatments, said Aouad.

Patchy Power. Ethiopia in 'Strong Position' to End Aids By 2030. By Befekadu Beyene Ethiopia plans to prevent more than half a million AIDS-related deaths and prevent up to 80,000 new HIV infections by 2020, according to the Federal HIV/AIDS Prevention and Control Office (HAPCO). 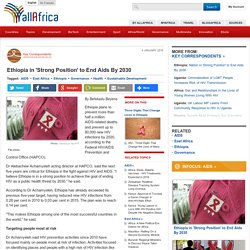 Dr Alebachew Achamyeleh acting director at HAPCO, said the next five years are critical for Ethiopia in the fight against HIV and AIDS. "I believe Ethiopia is in a strong position to achieve the goal of ending HIV as a public health threat by 2030," he said. According to Dr Achamyeleh, Ethiopia has already exceeded its previous five-year target, having reduced new HIV infections from 0.28 per cent in 2010 to 0.03 per cent in 2015.

The plan was to reach 0.14 per cent. "This makes Ethiopia among one of the most successful countries in the world," he said. Targeting people most at risk Dr Achamyeleh said HIV prevention activities since 2010 have focused mainly on people most at risk of infection. What' New , Opening of NORDIC Medical center in Addis Ababa. Ethiopia: Bold Move to Foster Pharmaceutical Industry. By Girmachew Gashaw Pharmaceutical excipients are no longer inert materials but are effective and able to improve the characteristics of the products' quality, stability, functionality, safety, solubility and acceptance of patients. 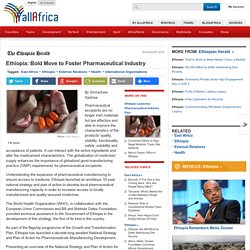 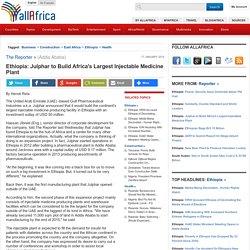 Julphar announced that it would build the continent's largest injectable medicine producing facility in Ethiopia with an investment outlay of USD 50 million. Hassan Jibreel (Eng.), senior director of corporate development for the company, told The Reporter last Wednesday that Julphar has found Ethiopia to be the hub of Africa and a center for many other international organizations. Actually, what the company is thinking of doing is an expansion project. Africa's First Insulin Factory. By Esrael Yohannes Julphar Pharmaceutical expands existing factory to create insulin factory with aim to make Ethiopia the insulin hub of Africa Julphar Ethiopia Pharmaceutical Industry, which was inaugurated in February 2013, is introducing what it says will be Africa's first insulin factory, as an expansion of the existing factory. 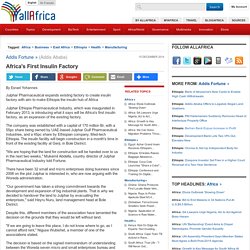 The company was established with a capital of 170 million Br, with a 55pc share being owned by UAE-based Julphar Gulf Pharmaceutical Industries, and a 45pc share by Ethiopian company, Med-tech Ethiopia. The insulin facility will begin construction in a month's time in front of the existing facility at Gerji, in Bole District. "We are hoping that the land for construction will be handed over to us in the next two weeks," Mukemil Abdella, country director of Julphar Pharmaceutical Industry told Fortune.

There have been 32 small and micro enterprises doing business since 2006 on the plot Julphar is interested in, who are now arguing with the Woreda administration. Ethiopia hopes to set world record for HIV tests. Awramba Times: why is Bill gates so excited about Ethiopia?.mp4. Ethiopia’s first Medical Hotline launched.