Nikiwe meets the Founder of Flying Doctors Nigeria. Nigerian doctors set to partner Dubai Health Authority for better healthcare services - BusinessDay : News you can trust BusinessDay : News you can trust. Dubai Health Authority (DHA) is set to partner Nigerian and other African doctors to avail Nigerians and others opportunity for top-notch healthcare services in Nigeria and Dubai. 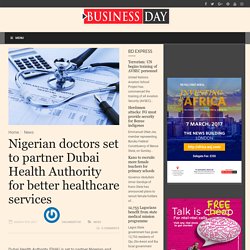 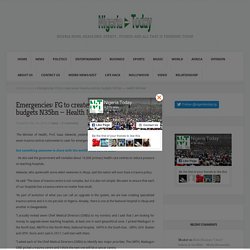 Isaac Adewole, yesterday said the Federal Government will soon create seven trauma centres nationwide to cater for emergencies. He also said the government will revitalize about 10,000 primary health care centres to reduce pressure on teaching hospitals. Crisis looms in the Borno as one third of healthcare facilities destroyed. The World Health organisation has reported that over 250 out of about 743 health facilities in the Northeastern state of Borno, Nigeria have been destroyed due to the activities of the insurgent group, Boko Haram. 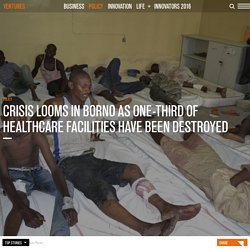 In the report released on Thursday, December 15, 2016, the organisation said that 35 percent of the 743 health facilities in Borno have been destroyed. Of the remaining, about 29 percent are partially damaged and only 34 percent are intact, but most of them do not have access to uncontaminated water sources. Officials say these figures come from the first report after WHO and Borno State Ministry of Health set up a system to gather information about the state of health services in the state. FG commits N550mn for revitalisation of 110 primary health care centers - Nigeria Today. The Federal Government on Thursday said it has committed N550 million to renovate 110 primary healthcare facilities in the country as a pilot programme for the revitalisation of Primary Health Care Centres (PHCs) in Nigeria. 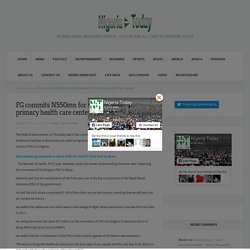 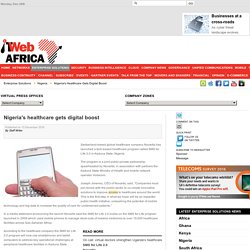 Nigerian healthcare authorities push for widespread antenatal services. Nigeria to Lose $8 Billion to Cardiovascular Diseases By 2026 - Minister. By Sola Ogundipe Minister of Health, Prof Isaac Adewole, has cautioned that unless drastic and sustained actions were taken, the economic loss from cardiovascular (heart) diseases, stroke and diabetes in Nigeria could rise to a projected US$8 billion in the next 10 years, according to estimates by the World Health Organisation, WHO. 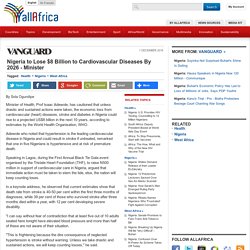 Adewole who noted that hypertension is the leading cardiovascular disease in Nigeria and could result in stroke if untreated, remarked that one in five Nigerians is hypertensive and at risk of premature death. 39 million people living with hypertension in Nigeria. Nigeria: Investigation - How Drug Addiction Threatens a Generation of Northern Nigerian Women (Part 2) According to the 2015 annual report of the National Drug Law Enforcement Agency, NDLEA, the north-west topped the table of arrests for drug related offences for that year, with a total of 2,205 persons, beating the south-west which recorded 1,785 arrests. 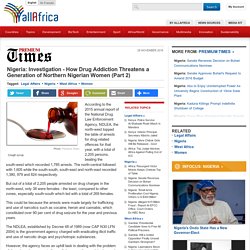 The north-central followed with 1,605 while the south-south, south-east and north-east recorded 1,380, 979 and 824 respectively. But out of a total of 2,205 people arrested on drug charges in the north-west, only 38 were females - the least, compared to other zones, especially south-south which led with a total of 269 females. This could be because the arrests were made largely for trafficking and use of narcotics such as cocaine, heroin and cannabis, which constituted over 90 per cent of drug seizure for the year and previous years. The NDLEA, established by Decree 48 of 1989 (now CAP N30 LFN 2004) is the government agency charged with eradicating illicit traffic and use of narcotic drugs and psychotropic substances.

Mr. Mr. Nigeria: 'Nigeria Has Highest Prevalence of Obstetric Fistula' Photo: UNMIL The continent is severely short of skilled medical personnel Female doctor performing an operation to correct Fistula By Ruby Leo The United Nation Children Fund (UNICEF) at the weekend revealed that over 0.4 to 0.8million women suffer from obstetric fistula (OF) in Nigeria, ranking the country as highest prevalence of Obstetric Fistula in the world. 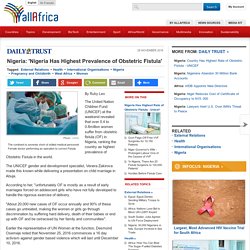 The UNICEF gender and development specialist, Venera Zakirova made this known while delivering a presentation on child marriage in Abuja. According to her, "unfortunately OF is mostly as a result of early marriages forced on adolescent girls who have not fully developed to handle the rigorous exercise of delivery. Nigeria set to resume vaccine production, eyes $280m from export — News — The Guardian Nigeria. Ogbonnaya Onu The Federal Government is set to produce vaccines for consumption in the country and hopes to get $280 million exporting them to African countries. 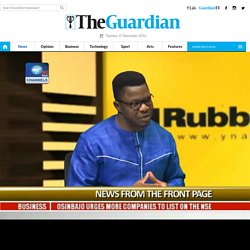 The Chairman of the National Immunisation Financing Task Force Team (NIFT), Dr. Ben Anyene told the Minister of Science and Technology, Dr. Ogbonnaya Onu in Abuja yesterday, that when fully in production, vaccines from Nigeria will cater for seven million children. They could also yield $280 million in export. This will be the second time Nigeria is producing vaccines for local use and export. Analysis: More Nigerians Will Die Of Cancer Than HIV, Malaria In 7 Years - Reports Afrique News. A study, conducted by the Federal Ministry of Health and the Analysis of Non-Communicable Diseases Prevention Policies in Africa Project (ANPPA), has revealed that more Nigerians will die of cancer within the next seven years. 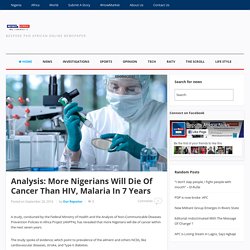 The study spoke of evidence, which point to prevalence of the ailment and others NCDs, like cardiovascular diseases, stroke, and Type II diabetes. The stakeholders also adopted strategies to accelerate response and guidelines towards formulation of policies and interventions on NCDs. An expert from the University of Ibadan, Prof. Oladimeji Oladepo, who led the team of researchers, observed that cancer, an NCD, could kill more than malaria and HIV, previously feared for their higher casualties. He said this was because the country did not have a strong health system to absorb and treat people well. He said: “Non-communicable diseases kill people, probably more than malaria and HIV put together. He said: “Cancer is one of the diseases with rising incidences. Related. Why Nigeria needs a maternal healthcare revolution. A nurse inspects a pregnant woman outside a ward at a maternity hospital renovated by Royal Dutch Shell in Obio district in Nigeria's oil city of Port Harcourt March 24, 2011.

REUTERS/Akintunde Akinleye. Nigeria: Country Records First Baby From Frozen Egg. By Sola Ogundipe Lagos — Nigeria has recorded the first successful birth of a baby conceived from frozen egg of a 44-year-old woman, who had suffered infertility for eight years, making it the first in the country and West Africa. The birth and conception of the baby, named Tiwatope, which is the 5001st in the world, were carried out by Nigerian fertility specialists at The Bridge Clinic, a Lagos-based fertility treatment centre, where the mother had her eggs frozen using the vitrification (flash-freezing) process. Announcing the medical milestone, a fertility physician at the Bridge Clinic, Lagos, Dr Emmanuel Owie, said the birth of the baby on February 16, 2016, effectively puts Nigeria on the global map as regards the practice of oocyte (egg) freezing or cryopreservation, a new offering in the in-vitro fertilization (IVF) space. AU adopts Nigeria as one of Regional CDC. The African Union has adopted Nigerian Centre for Disease Control, as one of its five Regional Collaborating Centres for Disease Control.

Since 2006 government has provided free antiretroviral treatment at designated facilities in the country, which has an estimated 3.1 million people living with HIV/AIDS. But this has not been enough to eliminate the high and sometimes inequitable economic burden of HIV/AIDS on households. Exorbitant food and transport costs, as well as the costs of illnesses linked to HIV, hinder full access to treatment services. Households end up having to fork out money they don't necessarily have. Nigeria: Buhari Wins Polio Eradication Champion Award. Press releaseBy Press Release In acknowledgment of his government's efforts to keep Nigeria polio-free, Rotary ( Wednesday presented President Muhammadu Buhari with its Polio Eradication Champion Award. Nigeria spends $1bn annually on medical tourism –Minister - Punch Newspapers. Nigeria: Ondo, Nigeria's Medical Tourism Destination. OpinionBy Olufemi Ajasa.

300m child-friendly antimalarial treatments supplied without profit by Novartis. Published on December 9, 2015 by pmnews · No Comments Novartis has announced that it has reached a delivery milestone of 300 million pediatric antimalarial treatments supplied without profit since 2009, helping to reduce the disease burden for children in more than 30 malaria-endemic countries. Coartem® Dispersible is the first artemisinin-combination therapy (ACT) developed by Novartis in collaboration with Medicines for Malaria Venture (MMV) specifically to meet the needs of children (weighing 5kg and above).

Never before have so many pediatric treatments been distributed in such a short timeframe to children suffering from malaria. Malaria is a preventable and treatable yet life-threatening disease, caused by parasites (primarily Plasmodium falciparum and Plasmodium vivax). These are transmitted to people through the bite of infected mosquitoes. “We are proud of the part we have played in helping to reduce childhood deaths from malaria. Nigeria loses five women hourly to childbirth, says UNICEF. The United Nations Children’s Cultural Scientific and Educational Fund (UNICEF) yesterday urged Nigerian government and relevant agencies to provide adequate funding for healthcare delivery noting that in every one hour Nigeria loses five women due to childbirth complications.