Senate GOP criticizes past global warming claims. The report also addresses dire predictions made about rising sea levels and extreme weather made in the media by politicians and activists. 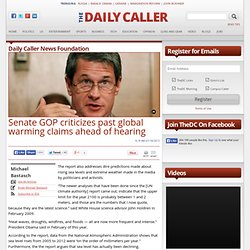 “The newer analyses that have been done since the [UN climate authority] report came out, indicate that the upper limit for the year 2100 is probably between 1 and 2 meters, and those are the numbers that I now quote, because they are the latest science.” said White House science advisor John Holdren in February 2009. “Heat waves, droughts, wildfires, and floods — all are now more frequent and intense.” President Obama said in February of this year. According to the report, data from the National Atmospheric Administration shows that sea level rises from 2005 to 2012 were “on the order of millimeters per year.”

Furthermore, the the report argues that sea level has actually been declining. Regarding extreme weather, the report cites the “skeptical environmentalist” Dr. Scopus - Document details. At Last, an Action Plan on Climate. It is an impressive lineup that aims not only to reduce carbon emissions but to strengthen the nation’s defenses against rising seas, more intense storms, drought and other consequences of global warming. 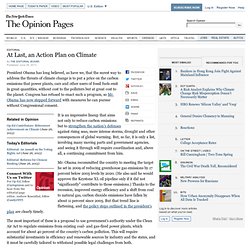 But, so far, it is only a list, involving many moving parts and government agencies, and seeing it through will require coordination and, above all, a continuing commitment from him. Mr. Obama recommitted the country to meeting the target he set in 2009 of reducing greenhouse gas emissions by 17 percent below 2005 levels by 2020. (He also said he would approve the Keystone XL oil pipeline only if it did not “significantly” contribute to those emissions.)

Thanks to the recession, improved energy efficiency and a shift from coal to natural gas, carbon dioxide emissions have fallen by about 11 percent since 2005. Other aspects of the plan are less problematical but by no means sure things. His proposal to double renewable energy capacity on public lands by 2020 is also welcome. A Legal Blow to Sustainable Development. On TV and the Lecture Circuit, Bill Nye Aims to Change the World. “This might buy us a couple of minutes,” he said. Roughly two minutes later, before his drink was ready, he was recognized anyway. Two awed young women approached to ask if he was really Bill Nye the Science Guy. Like more than a dozen other college students who would approach him over the next several hours, they asked if they could take a picture with him. Technology as a key issue - German Energy Transition.

A Harsh Climate for Trade: How Climate Change Proposals Threaten Global Commerce. The upcoming Copenhagen conference on climate change has led to calls for the United States to adopt a climate change abatement program in advance. 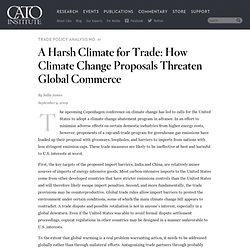 In an effort to minimize adverse effects on certain domestic industries from higher energy costs, however, proponents of a cap-and-trade program for greenhouse gas emissions have loaded up their proposal with giveaways, loopholes, and barriers to imports from nations with less stringent emission caps. These trade measures are likely to be ineffective at best and harmful to U.S. interests at worst. First, the key targets of the proposed import barriers, India and China, are relatively minor sources of imports of energy-intensive goods. Most carbon-intensive imports to the United States come from other developed countries that have stricter emissions controls than the United States and will therefore likely escape import penalties.

‎downloads.globalchange.gov/usimpacts/pdfs/agriculture.pdf. ‎downloads.globalchange.gov/usimpacts/pdfs/health.pdf. The Economic Impact of Climate Change. Globalization, Climate Change, and Human Health. The global scale, interconnectedness, and economic intensity of contemporary human activity are historically unprecedented,1 as are many of the consequent environmental and social changes. 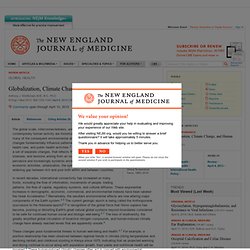 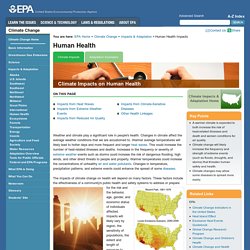 Climate change will likely increase the frequency and strength of extreme events (such as floods, droughts, and storms) that threaten human safety and health. Climate changes may allow some diseases to spread more easily. Sun setting over a city on a hot day. Weather and climate play a significant role in people's health. The impacts of climate change on health will depend on many factors.

Although the United States has well-developed public health systems (compared with those of many developing countries), climate change will still likely affect many Americans. Top of page. What to Make of a Climate-Change Plateau. Link Between Infectious Disease Transmission and Climate Change is Examined. An emerging body of evidence suggests that the changing global climate is already affecting infectious disease transmission patterns. 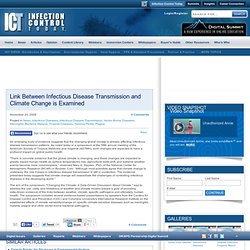 As noted today in a symposium at the 58th annual meeting of the American Society of Tropical Medicine and Hygiene (ASTMH), such changes are expected to have a profound impact on global public health. ‎www.who.int/globalchange/publications/climchange.pdf.