Running the Numbers - An American Self-Portrait 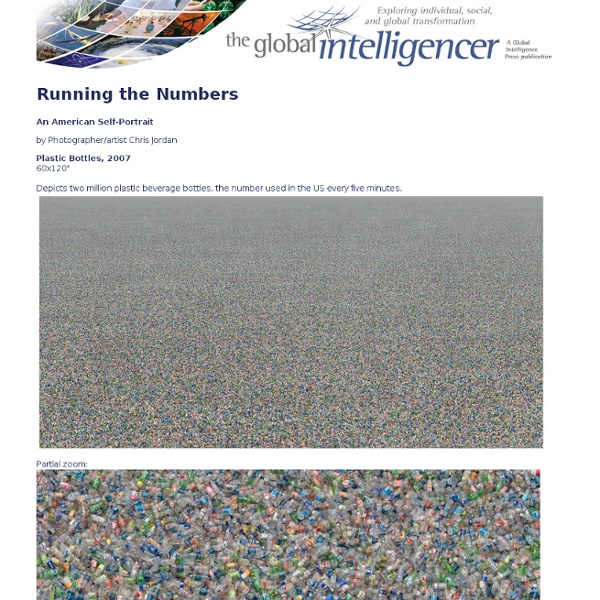 14 fun and odd facts you probably didn’t know A12-week-old macaque – who was abandoned by his mother – was close to death when it was rescued on Neilingding Island, in Goangdong Province. After being taken to an animal hospital his health began to improve but he seemed spiritless – until he developed a friendship with a white pigeon. The blossoming relationship helped to revive the macaque who developed a new lease of life. Source Source Can you see it? Source Source Source Source Animals can be submerged in a bath of perfluorohexane without drowning, as there is sufficient oxygen available in the solvent to allow respiration to continue. Source Source Source South Korean scientists altered a cat’s DNA to make it glow in the dark and then took that DNA and cloned other cats from it — creating a set of fluffy, fluorescent felines. Source Source Source Source Most Popular Posts This Week

The Men Who Stole the World -TimeFrames- Printout Wednesday, Nov. 24, 2010 By Lev Grossman A decade ago, four young men changed the way the world works. They did this not with laws or guns or money but with software: they had radical, disruptive ideas, which they turned into code, which they released on the Internet for free. These four men, not one of whom finished college, laid the foundations for much of the digital-media environment we currently inhabit. Then, for all intents and purposes, they vanished. In 1999 a Northeastern University freshman named Shawn Fanning wrote Napster, thereby pioneering peer-to-peer file sharing and a new paradigm for consuming media without the intermediary of a big studio or retailer. That same year, a Norwegian teenager named Jon Lech Johansen, working with two other programmers whose identities are still unknown, wrote a program that could decrypt commercial DVDs, and he became internationally infamous as "DVD Jon." In the first half of the 2000s, TIME interviewed each of these programmers.

stereomood – emotional internet radio - music for my mood and activities Flash Professional CS5 * Easing tween animations A motion tween is an animation that is created by specifying different values for an object property in different frames. Flash Pro calculates the values for that property in between those two frames. The term tween comes from the words “in between”. For example, you can place a symbol left of the Stage in frame 1, and move it to the right of the Stage in frame 20. tween span is a group of frames in the Timeline in which an object has one or more properties changed over time. target object of the tween span. property keyframe is a frame within a tween span where you explicitly define one or more property values for the tween target object. In the preceding example of tweening a movie clip from frame 1 to frame 20, frames 1 and 20 are property keyframes. Note: Beginning in Flash Professional CS4, the concepts of a “keyframe” and a “property keyframe” have changed. If a tweened object changes its location on the Stage during the tween, the tween span has a motion path associated with it.