CodeHS - Learn to Code at School or at Home 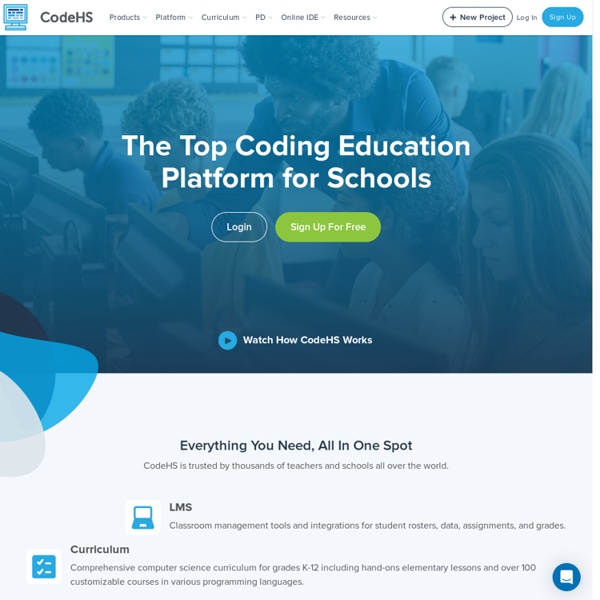 Silicon Valley Goes Hollywood: Top Coders Can Now Get Agents - Businessweek (An earlier version of this story ran online.) Max Nanis’s website prominently features about two dozen head shots of the skinny, scruffy 22-year-old Southern Californian with his shirt off. At the top of his “About” page, there’s a personalized contact number (936-CALL-MAX) and a link to 10X Management, his professional representation. It looks like the résumé of an actor, seemingly pitched for casting directors and producers—but Nanis’s background is in computational biology. He’s a coder, part of a generation of programming hotshots starting to view themselves more like Hollywood talent than bit jockeys. Intro to Computer Science & Programming Course When does the course begin? This class is self paced. You can begin whenever you like and then follow your own pace.

Technology — The Browning School In 2011, The Browning School acquired a MakerBot Thing-O-Matic, a 3-D printer that allows our boys to create colorful plastic models of objects. This machine can literally turn a three-dimensional computer model into a physical object. Engineers, architects and other professionals, as well as hobbyists and students, use this machine to make models of designs that they conceive or, alternately, download from the parent company’s website. Since 2011, even our Pre-Primary boys have learned about Maker-Bot in their technology classes As part of MakerBot’s series of website stories (posted on makerbot.com) highlighting how Replicator 3D printers are used in education, The Browning School was pleased to recently welcome Blake Eskin, editor, and Annelise Jeske, videographer.

Learning Google Script: 5 Best Sites & Tutorials to Bookmark How often do you use Google services? If you’re like me, the answer is “all the time”. I use Google Drive to store files. Sometimes, I use Google Docs to write articles (although I prefer Apple’s Pages and iA Writer more). I use Google Forms for making surveys. I use Google Chat to talk to friends. Scratch Offline Editor You can install the Scratch 2.0 editor to work on projects without an internet connection. This version will work on Mac, Windows, and some versions of Linux (32 bit). Note for Mac Users: the latest version of Scratch 2.0 Offline requires Adobe Air 20. To upgrade to Adobe Air 20 manually, go here.

Metta — Run Video Lessons in Your Groups Login with Facebook Login with Google connect with Google Drive 28 Tools to Learn Computer Programming From edshelf by edshelf: A discovery engine of websites, mobile apps, desktop programs, and electronic products for teaching and learning. Teaching primary and secondary students how to program has become a hot topic lately. Even people like United States President Barack Obama to actress Angela Bassett to music artist Shakira have spoken about the value of computer programming in an initiative called Hour of Code. With good reason too. Technology is a major part of our lives. Knowing how to build new technologies means having the ability to shape its direction. The Swift Parallel Scripting Language Swift lets you write parallel scripts that run many copies of ordinary programs concurrently, using statements like this: foreach protein in proteinList { runBLAST(protein); } Swift is parallel: it runs multiple programs concurrently as soon as their inputs are available, reducing the need for complex parallel programming. Swift is easy: Short, simple scripts can do large-scale work.

Data-binding Revolutions with Object.observe() Introduction A revolution is coming. There’s a new addition to JavaScript that’s going to change everything you think you know about data-binding. It’s also going to change how many of your MVC libraries approach observing models for edits and updates. Are you ready for some sweet performance boosts to apps that care about property observation? Okay. FEATURE: The Maze Coder Introducing students as young as 5 to the concepts of computer science can be challenging but also immensely rewarding. Though blockly-based platforms like Scratch and Hopscotch can prove too tricky for them, there are a wide range of apps available that introduce youngsters to sequencing, algorithms and simple computational thinking. From Daisy the Dinosaur to Lightbot and The Foos (my favourite for use with Foundation Stage students) the choice is excellent and the touch screen interface helps to streamline the process for those getting their very first taste of coding. Rather than start with an app though, I like to start with something more practical when first introducing computer science concepts in KS1. This could mean using floor robots to sequence a series of steps or perhaps something unplugged that takes a more kinaesthetic approach. There were a couple of major advantages to this approach.