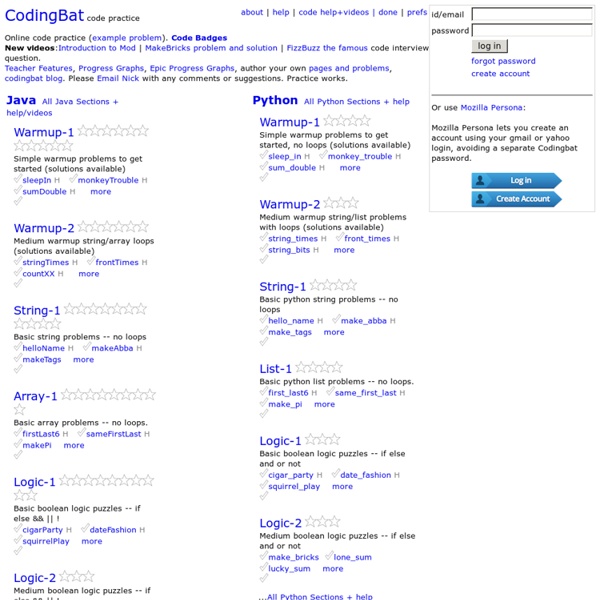 pybotwar - Robot battle simulation with robots coded in Python pybotwar is a fun and educational game where players write computer programs to control simulated robots. (See the Screenshots page for more pictures) Your task is to create a computer program to control a robot for the arena. The last robot alive is the winner. 6. Built-in Exceptions — Python v3.1.3 documentation In Python, all exceptions must be instances of a class that derives from BaseException. In a try statement with an except clause that mentions a particular class, that clause also handles any exception classes derived from that class (but not exception classes from which it is derived). Two exception classes that are not related via subclassing are never equivalent, even if they have the same name. The built-in exceptions listed below can be generated by the interpreter or built-in functions. Except where mentioned, they have an “associated value” indicating the detailed cause of the error.

Designing Mobile Apps: How to Transition from Traditional Web Design Who is this class for? Web and graphic designers, UX designers, developers, and really anyone else who wants to get started designing great experiences for mobile! About the class Designing a native mobile app for iOS, Android or another platform is a different beast compared to traditional web design. While many of the same design principles apply, there are major differences and considerations unique to mobile.

Introduction to Computer Science using Java This is a course in Java programming for beginners. It covers the fundamentals of programming, roughly the same material that is covered in a beginning programming course in a university or in a high school AP Computer Science course. For maximum benefit, go though these ../Java5/Notes interactively, thinking about and answering the question at the bottom of each page.

Pygame - resource modules welcome to our humble (and slightly strange) little part of the World Wide Web. Let me give you a quick introduction about what you've stumbled upon here. pygame (the library) is a Free and Open Source python programming language library for making multimedia applications like games built on top of the excellent SDL library. Like SDL, pygame is highly portable and runs on nearly every platform and operating system. Millions of people have downloaded pygame itself, which is a whole lot of bits flying across the interwebs. pygame.org (the website) welcomes all Python game, art, music, sound, video and multimedia projects. Style Guide for Python Code Code should be written in a way that does not disadvantage other implementations of Python (PyPy, Jython, IronPython, Cython, Psyco, and such).For example, do not rely on CPython's efficient implementation of in-place string concatenation for statements in the form a += b or a = a + b. This optimization is fragile even in CPython (it only works for some types) and isn't present at all in implementations that don't use refcounting. In performance sensitive parts of the library, the ''.join() form should be used instead. This will ensure that concatenation occurs in linear time across various implementations.Comparisons to singletons like None should always be done with is or is not, never the equality operators.Also, beware of writing if x when you really mean if x is not None -- e.g. when testing whether a variable or argument that defaults to None was set to some other value. The other value might have a type (such as a container) that could be false in a boolean context!

Play! Make Your First Video Game in 4 Weeks from Scratch with Unity (no coding!) Start Making Games!What do you do when you have a great idea for a game but no programming background? Before you give up, let me introduce you to the world of indie game development. With the technology and tools available today, you can start creating the game you've always wanted to make as soon as, well, today! Who is This Class for?

Maven Getting Started Guide What is Maven? At first glance Maven can appear to be many things, but in a nutshell Maven is an attempt to apply patterns to a project's build infrastructure in order to promote comprehension and productivity by providing a clear path in the use of best practices. Maven is essentially a project management and comprehension tool and as such provides a way to help with managing: BuildsDocumentationReportingDependenciesSCMsReleasesDistribution