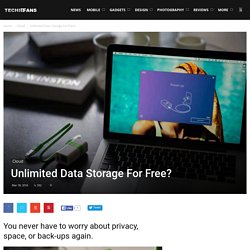 With Lima you can make a self managed cloud storage at your home. So you may be thinking , I have Dropbox, Google Drive, Onedrive and many other such professional and free cloud storage services, then why Lima? The answer is simple. You are the boss here. Because you set the amount of storage. Essentially Lima is a small device that plugs into your router, then into one or more USB connected external drives, and then all the information on those drives becomes available for use through the Lima apps, which work on Windows and Apple desktop OS systems, as well as Android and iOS mobile systems.

It gives the user complete control, ensuring they’re no longer bound to a service that charges them monthly, while securing their files and information like never before. It stays home, quietly. This is the most cheapest and efficient method available in town. How to track your bike in case of theft using your smartphone? Both mobiles and bikes are an easy target for thieves. 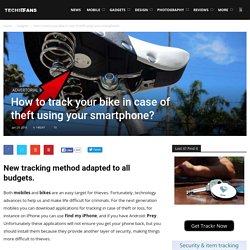 Fortunately, technology advances to help us and make life difficult for criminals. For the next generation mobiles you can download applications for tracking in case of theft or loss, for instance on iPhone you can use Find my iPhone, and if you have Android: Prey. Unfortunately these applications will not ensure you get your phone back, but you should install them because they provide another layer of security, making things more difficult to thieves. On bicycles locks are still being necessary, but I want to talk about a device that can be installed and provides a tracking service, but don’t say it aloud, we won’t give thieves any clues.

3D & 4D Printing. Projecto: The matchbox sized slide projector small enough to fit in the palm of your hand. Solar Cells Developed That Peel-And-Stick To Virtually Anything. April 17, 2013 redOrbit Staff & Wire Reports – Your Universe Online Stanford University and the Department of Energy´s National Renewable Energy Laboratory (NREL) have developed a peel-and-stick solar cell that could one day be used to charge mobile phones and power a variety of other small devices. 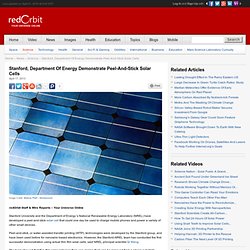 Peel-and-stick, or water-assisted transfer printing (WTP), technologies were developed by the Stanford group, and have been used before for nanowire based electronics. However, the Stanford-NREL team has conducted the first successful demonstration using actual thin film solar cells, said NREL principal scientist Qi Wang. Glove allows you to write text messages by touching letters on your hand. Gauntlet keyboard allows users to write messages by touching points on their palms and fingersSimilar to technology in Minority Report and creator Jiake Liu says his inspiration came from interest in science fiction movies By Daily Mail Reporter Published: 11:45 GMT, 26 October 2012 | Updated: 12:20 GMT, 26 October 2012 When mobile phone handsfree kits first emerged, many were surprised to see people walking around or riding public transport apparently talking to themselves. 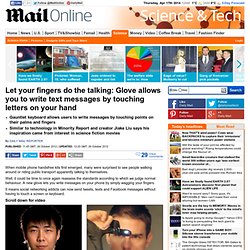 Well, it could be time to once again reassess the standards according to which we judge normal behaviour. The real iPad - revolutionary 'paper' screen you can twist and bend unveiled. The 30 gadgets which will change how you cook: Fantastic innovations compete for Design Lab 2012 awards. By Eddie Wrenn Published: 10:25 GMT, 20 September 2012 | Updated: 04:03 GMT, 21 September 2012 The kitchen has changed much over the last 30 years. 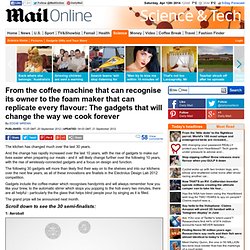 And the change has rapidly increased over the last 10 years, with the rise of gadgets to make our lives easier when preparing our meals - and it will likely change further over the following 10 years, with the rise of wirelessly-connected gadgets and a focus on design and function. The following 30 gadgets will more than likely find their way on to the shelves and into our kitchens over the next few years, as all of these innovations are finalists in the Electrolux Design Lab 2012 competition. Gadgets include the coffee-maker which recognises handprints and will always remember how you like your brew, to the automatic stirrer which stops you popping to the hob every two minutes, there are all helpful - particularly the the glass that helps blind people pour by singing as it is filled.

The grand prize will be announced next month. Want to show off your Scrabble skills? The £20,000 board that can broadcast your games online. Each tile contain electronic tags allowing viewers online to watch liveCan transmit game moves in just 974 milliseconds By Mark Prigg Published: 12:44 GMT, 16 November 2012 | Updated: 16:36 GMT, 16 November 2012 For the real fan of Scrabble, it could be the ultimate way to show off your skills - by broadcasting every move online. 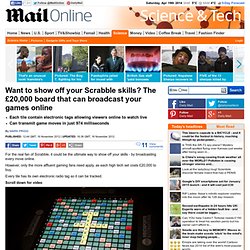 However, only the more affluent gaming fans need apply, as each high tech set costs £20,000 to buy. Who needs a zoom? Photography revolution as Harvard creates 'flat lens' that does away with the curved glass. Breakthrough could be used in everything from mobile phones to professional camerasCould also change the way data is transmitted through fibre optic cables By Eddie Wrenn Published: 12:51 GMT, 31 August 2012 | Updated: 13:49 GMT, 31 August 2012 DSLR cameras currently require long lenses - but a revolution could be coming The photography world is set to go through a revolution thanks to physicists at Harvard who have pushed the physical limits of light to its very limit. 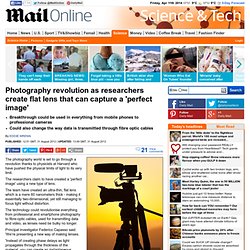 The researchers claim to have created a 'perfect image' using a new type of lens. The team have created an ultra-thin, flat lens which is a mere 60 nanometers thick - making it essentially two-dimensional, yet still managing to focus light without distortion. The technology could revolutionise everything from professional and smartphone photography to fibre-optic cables, used for transmitting data and video, as lenses need be bulky no longer.

The iPad robot that can let you go anywhere in the world - without ever leaving your living room. Motorised arm turns an iPad into a 'virtual you'Makers say it can be used to attend meeting and even tour art galleries By Mark Prigg Published: 09:46 GMT, 20 August 2012 | Updated: 14:07 GMT, 20 August 2012 For the frequent traveller, it could be the perfect way to attend those urgent meetings while staying at home. 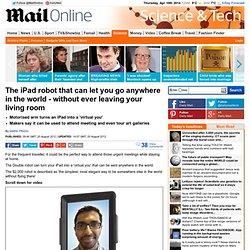 Want An RFID Chip Implanted Into Your Hand? Here's What The DIY Surgery Looks Like (Video) Berg London: The 'little printer' than can put the internet onto a till roll. Is it a jetski? Is it a light aircraft? It's both! Revolutionary miniature electric flying boat could revolutionise personal air transport. Blueseed ship: Hundreds of companies looking to secure spots on floating city off coast of Silicon Valley. Blueseed says more than 250 companies from 52 countries expressing interest in floating business shipHarboured in international waters, meaning only a passport - no visa required By Daily Mail Reporter Updated: 10:23 GMT, 6 June 2012 It’s a tentative anchors away for the world’s first floating start-up as more than 250 companies have expressed interest in joining Blueseed, a massive ship anchored in international waters off the coast of California’s Silicon Valley. The concept of the visa-free metropolis is simple – allow entrepreneurs from any country to do business near Silicon Valley, even if they cannot acquire a United States visa.

Blueseed says that start-ups from 52 different countries are expressing interest, a positive sign in getting the conceptual ship out into the open. Father creates 'energy egg' which turns electrical items off when rooms are empty. By Mark Prigg Published: 11:07 GMT, 31 July 2012 | Updated: 11:42 GMT, 31 July 2012 A despairing dad who created an energy ‘egg’ to curb his family’s extravagant electricity use has cracked America with his eco-friendly invention. 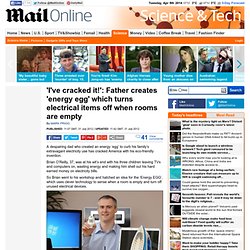 Brian O’Reilly, 37, was at his wit’s end with his three children leaving TVs and computers on, wasting energy and making him shell out his hard earned money on electricity bills. So Brian went to his workshop and hatched an idea for the ‘Energy EGG’, which uses clever technology to sense when a room is empty and turn off unused electrical devices. Brian O'Reilly, 37, developed an energy saving egg to help curb his electricity bill - and his invention has now taken the US by storm. Confident he had a winning invention Brian left his job as a software engineer and began to market the product.

Brian, who now employs four full time staff, said: 'It’s been a long hard slog and we still have a long way to go but we are getting there. The ultra-slim 'laptop' that's powered by your iPhone or Android. Plugs in via cable or dock, works with Android phonesQWERTY keyboard and multi-touch trackpad control. 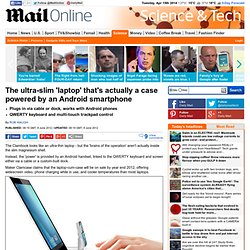 Lonely gamer creates virtual girlfriend who reacts to every stroke and cuddle (but she still resists his advances!) Google Glasses: Picture taken with Android 'goggles' that have built-in camera and GPS. Scientists encode moving pictures into a gas.