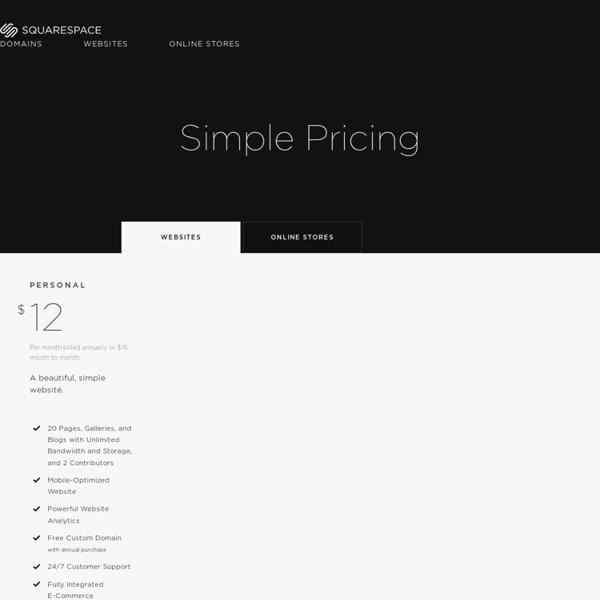 How long are your contracts? Squarespace plans are paid monthly or yearly. We make it simple to start — and stop — your service at any time. Is there a discount for yearly service? Yes, we offer discounts on up-front long-term commitments. You will also receive one year off of a new domain registration with your annual purchase. Do I need another web host? No. Can I download Squarespace? No. How do I accept payments with Squarespace commerce? Squarespace is tightly integrated with Stripe for accepting payments directly to your bank account. How much does it cost to process payments through Squarespace Commerce? While Squarespace does not charge transaction fees on purchases through our commerce products, Stripe, the payment processor integrated with Commerce, charges a low, market rate for processing charges. Do you offer student pricing? You can learn more about our education program here. How do I sign up? You start with a free trial. How do I cancel service? Can I switch plans? Yes. Yes.

101 Social Media Tools for Social Media Marketing and More Credit: fredcavazza via Flickr It doesn’t make sense to jump in and use all new social media tools that come along just because everyone else is or because you think they’re “cool.” No one can really afford to be that unproductive with their time (or if they can, that alone speaks volumes). At Social Implications, we’re big advocates of cutting through the noise by narrowing down the social media tools you use to the ones best suited for your target market or audience.

15 Cool jQuery Effects to Enhance User Experience Companies wrestling for businesses on the web prefer having appealing websites with rich user interfaces and stunning visual effects. jQuery has simplified the task of presenting dynamic content along with the visual effects. With jQuery, you can rapidly create advance, feature-rich websites. Now, you can develop standardized, highly responsive web pages using Ajax, create user-friendly forms, and add jQuery to enhance usability and user experience of the visitors. There was a time, when we were just able to categorize images in tables, which were displayed in a new window or pop up with the user’s click; it is over now. Today, with amazing effects created by jQuery, it is easy to showcase image galleries in many attractive styles. jQuery effects give excellent usability experience to the users. Browsing and viewing contents and image galleries have went through a long journey in their development area.

The designer’s toolbox Work better, faster. Sketch is built for modern graphic designers, and it shows in every fibre of the app. From a flexible workflow with support for Multiple Pages and Artboards, to advanced Export Options that can export your layers to any size. Powerful features like Symbols and Shared Styles are there to make reusing elements quick and easy. Sketch has everything you need to help you design the best you can. ePortfolio Levels (K-12 Schools) - ePortfolios with GoogleApps Levels of ePortfolio Development in K-12 Schools Most of the research on the implementation of electronic portfolios has been in higher eduction. Most of the customized e-portfolio tools, both commercial and open source, have been created in and for higher education, whereas the paper-based portfolio process itself began in K-12 schools.

5 Mistakes Retailers Can't Wait For You To Make Failed to send Send to Phone Cancel Home Community Publishers Explore Continue to article >> Download the app to listen to this article while you commute. Your browser is not compatible with our audio player. You should upgrade to Google Chrome :). [Rewind] Top 30 Airline Social Media Case-Studies Featured on SimpliFlying in 2012 Shubhodeep Pal is the Vice President of Products and Operations at SimpliFlying and has been leading Product Development, Marketing and Business Development since December 2010 from the headquarters in Singapore. His writings have appeared extensively on SimpliFlying as well as revered industry outlets such as Tnooz, Airlinetrends and Loyalty360. He has considerable experience working in the social media sphere, having also conducted a workshop at the Ministry of Home Affairs, Singapore.

20+ Demos Showing Advanced jQuery Effects Just a short while ago, Flash was one of the primary technologies used by web designers to add interactivity to a website. Since the introduction of the iPad, with its lack of the Flash Player, there’s an acceleration in the web development world to use alternative technologies to Flash, such as jQuery, Ajax and others. Although Flash is still a very powerful and useful tool, which works great on many cases, several of the effects that web designers are accustomed to creating in Flash, can be just as easily implemented using jQuery. Here are 21 online demos that show the power of jQuery for creating advanced effects and interactivity that can rival Flash.

First-time configuration of WordPress from the Course WordPress DIY: Setting Up WordPress - Every time I set up a new WordPress site, there are a few configuration settings I tweak right out of the gate. These are small configurations, and they don't really make much difference right now, but they'll make differences later as you start working with the site, and they're easy to forget. So it's better to get them out of the way right now.

Record Labels go to High Court to Force More ISPs to Block Pirate Bay The major recording labels are on a fresh High Court mission to force Ireland's Internet service providers to block The Pirate Bay. The site is already blocked by major ISP Eircom, but the big four of EMI, Sony, Universal and Warner Music want more and are seeking an injunction against four other ISPs including UPC and Vodafone. While almost all ISPs are happy to comply with requests from child protection organizations and the police to block websites that promote abuse, the issue of blocking on copyright grounds is more controversial, not least since copyright issues are rarely as black-and-white. Lucky 13 « NeuerSpace Last week, I celebrated my 13th anniversary in real estate. In honor of the anniversary, I decided to share 13 things I have learned in my career as a service provider. 1. Put the client first.

22 Brilliant and Advanced jQuery Effects to WOW Your Visitors The jQuery library provides several techniques for adding animation to a web page. These include simple, standard animations that are frequently used, and the ability to craft sophisticated custom effects. In this article we've gathered 24 brilliant and advanced jQuery effects that can really surprise your visitors by their beauty and usability. 24 Brilliant and Advanced jQuery Effect iCarousel iCarousel is a beautiful and simple horizontal image slider, with a beautiful look. ISP Walks Out of Piracy Talks: “We’re Not The Internet Police” A leading Australian Internet service provider has pulled out of negotiations to create a warning notice scheme aimed at reducing online piracy. iiNet, the ISP that was sued by Hollywood after refusing to help chase down alleged infringers, said that it can't make any progress with righthsolders if they don't make their content freely available at a reasonable price. The ISP adds that holding extra data on customers' habits is inappropriate and not their responsibility. In many countries around the world the entertainment industries are attempting to engage Internet service providers in their battle against online piracy.