The 20 Things You Need To Let Go To Be Happy 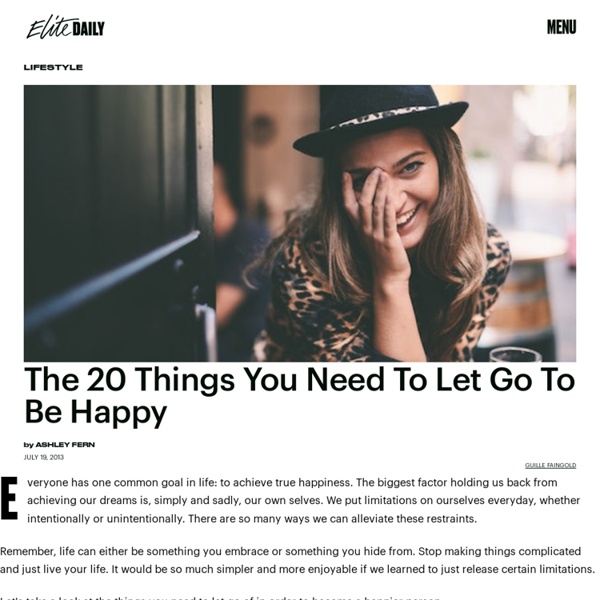 Everyone has one common goal in life: to achieve true happiness. The biggest factor holding us back from achieving our dreams is, simply and sadly, our own selves. We put limitations on ourselves everyday, whether intentionally or unintentionally. There are so many ways we can alleviate these restraints. Remember, life can either be something you embrace or something you hide from. Stop making things complicated and just live your life. Let’s take a look at the things you need to let go of in order to become a happier person. 1. Who gives a sh*t what other people think? 2. Anger will eat at you from the inside. “Life becomes easier when you learn to accept an apology you never got.” 3. There is only one person’s opinion you should be concerned with when it comes to your body and that is you. 4. There is no such thing as a perfect partner, so throw your checklist out the window. “He’s not perfect. 5. Just like there is no perfect partner, there is also not a perfect life. 6. 7. 8. 9. 10.

25 Things You Keep In Your Life That Are Only Holding You Back 1. The phone numbers of people that never, ever call you or text you first, and often don’t even respond when you text them. 2. Top 10 Life Lessons from the Bhagavad Gita Although a component of the scriptural trinity of Sanatan Dharma, contents of Bhagavad Gita are universal and non-sectarian. The literal meaning of ‘Bhagavad Gita’ is ‘Song of God’. Written in the form of a poem, Bhagavad Gita presents the principles of seemingly complex metaphysical science in the simplest form possible. For millennia, it has inspired millions of saints, leaders, scientists, philosophers and ordinary people worldwide.

Fibonacci Leonardo Bonacci (c. 1170 – c. 1250)[2]—known as Fibonacci (Italian: [fiboˈnattʃi]), and also Leonardo of Pisa, Leonardo Pisano, Leonardo Pisano Bigollo, Leonardo Fibonacci—was an Italian mathematician, considered as "the most talented Western mathematician of the Middle Ages.".[3][4] Fibonacci introduced to Europe the Hindu–Arabic numeral system primarily through his composition in 1202 of Liber Abaci (Book of Calculation).[5] He also introduced to Europe the sequence of Fibonacci numbers (discovered earlier in India but not previously known in Europe), which he used as an example in Liber Abaci.[6] Life[edit] Fibonacci was born around 1170 to Guglielmo Bonacci, a wealthy Italian merchant and, by some accounts, the consul for Pisa.

45 Things I Wish I Could Tell To My Younger Self Bret (11 yrs old) at the breakfast table Today, I am 45… although most days I feel about 15 years younger. It was a weird thing yesterday, filling out a tour waiver here in Mexico and realizing it was the last time I could truthfully check off the 25-44 age bracket box. I’ve never been one to make a big deal out of my birthdays, but this one seems somehow significant, as if I’m entering a new phase in my life and evolution. Feeling contemplative, I came up with 45 things I wish I could go back in time and tell to my younger self: 1) You’re good enough.

Op-Ed: Success Is Having the Balls to Trust Yourself As a commercial designer, a number of things excite me creatively and motivate me to make great work: the opportunity to create for an audience, the novelty of doing a project for the first time and, of course, getting paid. But nothing ruins a perfectly good hard-on for work like having a client who does not trust me. Trust sets the stage and allows good work to happen. In essence TRUST is the lifeblood of my business, possibly of any business. The first level of trust is having it in yourself—trusting that your opinions matter and are valid.

The 13 Best Science and Technology Books of 2013 by Maria Popova The wonders of the gut, why our brains are wired to be social, what poetry and math have in common, swarm intelligence vs. “God,” and more. On the heels of the year’s best reads in psychology and philosophy, art and design, history and biography, and children’s books, the season’s subjective selection of best-of reading lists continues with the finest science and technology books of 2013. (For more timeless stimulation, revisit the selections for 2012 and 2011.) Powerful words by Carl Sagan If you look carefully at the NASA photo below, you will see a little white dot. This minute speck is Earth seen from the Voyager 1 spacecraft as it exits the solar system, nearly 4 billion miles away. The photo was taken back in 1990. Look again at that dot. That’s here. That’s home.

20 History Questions They Refuse To Answer In School Traditional educational systems basically teach us that the history of man only dates back to about 8,000 years ago while religious texts date mankind to approximately 6,000 years ago. It is more than obvious that there a massive push to occlude our true history and origins. While you may not agree with some of the questions, please try to view them with an open mind. As you’ll see, the history we have been taught has been manipulated and obscured from us. Ask yourself (or others) the following questions and feel free to comment at the end of the article!

How I Was Able to Ace Exams Without Studying Editor’s note: This is a guest post from Scott Young of ScottYoung.com. In high school, I rarely studied. Despite that, I graduated second in my class. In university, I generally studied less than an hour or two before major exams.

5 Scientific Ways to Build Habits That Stick “We are what we repeatedly do. Excellence then, is not an act, but a habit.” Sobering words from Aristotle, and an astute reminder that success doesn’t come overnight. On the contrary, it’s discipline that gets you from Point A to the often elusive Point B. In our day-to-day lives, habits can often be tough to build, as there are plenty of distractions that can lead us off the “straight and narrow” and right back to our old ways. 7 Social Hacks For Manipulating People 1. Whenever someone is angry and confrontational, stand next to them instead of in front of them. You won’t appear as so much of a threat, and they eventually calm down. 2. Open with “I need your help.” People don’t like the guilt of not helping someone out.

4 Practical Philosophies That Will Empower You Philosophy is a fascinating branch of wisdom. However these esoteric ideas are sometimes difficult to translate into practical application. What are all of those thoughts, suppositions and theories actually good for? How can an understanding of philosophy ultimately help you lead a better life? Today I want to examine with you four philosophical ideas that have influenced my life in a very positive way. With the right twists I’ll be able to show you that they are indeed empowering.

Genesis creation narrative The Genesis creation narrative is the creation myth of both Judaism and Christianity. It is made up of two parts, roughly equivalent to the first two chapters of the Book of Genesis. In the first part, Genesis 1:1 through Genesis 2:3, Elohim, the generic Hebrew word for God, creates the world in six days, then rests on, blesses and sanctifies the seventh day.