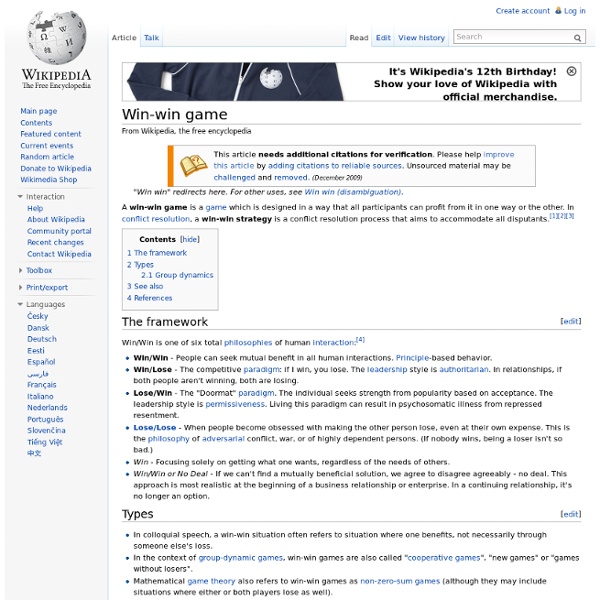 A win-win game is a game which is designed in a way that all participants can profit from it in one way or the other. In conflict resolution, a win-win strategy is a conflict resolution process that aims to accommodate all disputants.[1][2][3] Types[edit] In colloquial speech, a win-win situation often refers to situation where one benefits, not necessarily through someone else's loss.In the context of group-dynamic games, win-win games are also called "cooperative games", "new games" or "games without losers".Mathematical game theory also refers to win-win games as non-zero-sum games (although they may include situations where either or both players lose as well).The TKI Thomas/Kilmann Conflict Profile provides a model that reveals preferences under stress and pressure. Collaboration style focuses on win-win outcomes. Group dynamics[edit] See also[edit] References[edit] Related:  Win-Win Conflict Resolution & Game Theory • Choice Theory

Conciliation Conciliation is an alternative dispute resolution (ADR) process whereby the parties to a dispute use a conciliator, who meets with the parties separately in an attempt to resolve their differences. They do this by lowering tensions, improving communications, interpreting issues, providing technical assistance, exploring potential solutions and bringing about a negotiated settlement. Conciliation differs from arbitration in that the conciliation process, in and of itself, has no legal standing, and the conciliator usually has no authority to seek evidence or call witnesses, usually writes no decision, and makes no award. Conciliation differs from mediation in that the main goal is to conciliate, most of the time by seeking concessions. In conciliation the parties seldom, if ever, actually face each other across the table in the presence of the conciliator. Effectiveness[edit] Historical conciliation[edit] Historical conciliation is not an excavation of objective facts. Japan[edit]

Public choice Within the Journal of Economic Literature classification codes, public choice is a subarea of microeconomics, under JEL: D7, Analysis of Collective Decision-Making, and including JEL: D72, Economic Models of Political Processes: Rent-Seeking, Elections, Legislatures, and Voting Behavior.[4] Public choice theory is also closely related to social choice theory, a mathematical approach to aggregation of individual interests, welfares, or votes.[5] Much early work had aspects of both, and both use the tools of economics and game theory. Since voter behavior influences the behavior of public officials, public choice theory often uses results from social choice theory. General treatments of public choice may also be classified under public economics.[6] Background and development[edit] A precursor of modern public choice theory was Knut Wicksell (1896),[7] which treated government as political exchange, a quid pro quo, in formulating a benefit principle linking taxes and expenditures.[8]

Confrontation analysis Confrontation analysis (also known as dilemma analysis) is an operational analysis technique used to structure, understand and think through multi-party interactions such as negotiations. It is the underpinning mathematical basis of drama theory. It is derived from game theory but considers that instead of resolving the game, the players often redefine the game when interacting. Derivation and use[edit] Much of the theoretical background to General Rupert Smith's book The Utility of Force drew its inspiration from the theory of confrontation analysis. I am in debt to Professor Nigel Howard, whose explanation of Confrontation Analysis and Game Theory at a seminar in 1998 excited my interest. Confrontation analysis can also be used in a decision workshop as structure to support role-playing[3] for training, analysis and decision rehearsal. Method[edit] An interaction as a sequence of confrontations where the card table[5] changes as the parties struggle to eliminate their dilemmas[1]

Competition Win-Lose Competition in sports. A selection of images showing some of the sporting events that are classed as athletics competitions. Consequences[edit] Competition can have both beneficial and detrimental effects. Many evolutionary biologists view inter-species and intra-species competition as the driving force of adaptation, and ultimately of evolution. However, some biologists, most famously Richard Dawkins, prefer to think of evolution in terms of competition between single genes, which have the welfare of the organism 'in mind' only insofar as that welfare furthers their own selfish drives for replication. Biology and ecology[edit] Economics and business[edit] Experts have also questioned the constructiveness of competition in profitability. Three levels of economic competition have been classified: In addition, companies also compete for financing on the capital markets (equity or debt) in order to generate the necessary cash for their operations. Interstate[edit] Law[edit] Politics[edit]

Cooperation Among humans[edit] Language allows humans to cooperate on a very large scale. Certain studies have suggested that fairness affects human cooperation; individuals are willing to punish at their own cost (altruistic punishment) if they believe that they are being treated unfairly.[2][3] Sanfey, et al. conducted an experiment where 19 individuals were scanned using MRI while playing an Ultimatum Game in the role of the responder.[3] They received offers from other human partners and from a computer partner. It has been observed that image scoring[clarification needed] promotes cooperative behavior in situations where direct reciprocity is unlikely.[4] In situations where reputation and status are involved, humans tend to cooperate more. Among other animals[edit] Cooperation exists in non-human animals. Some researchers assert that cooperation is more complex than this. Kin selection[edit] Cooperative systems[edit] The components in a cell work together to keep it living. See also[edit]

Reciprocal altruism Diagram showing reciprocal altruism In evolutionary biology, reciprocal altruism is a behaviour whereby an organism acts in a manner that temporarily reduces its fitness while increasing another organism's fitness, with the expectation that the other organism will act in a similar manner at a later time. The concept was initially developed by Robert Trivers to explain the evolution of cooperation as instances of mutually altruistic acts. The concept is close to the strategy of "tit for tat" used in game theory. Theory[edit] The concept of "reciprocal altruism", as introduced by Trivers, suggests that altruism, defined as an act of helping someone else although incurring some cost for this act, could have evolved since it might be beneficial to incur this cost if there is a chance of being in a reverse situation where the person whom I helped before may perform an altruistic act towards me.[1] There are two additional conditions necessary "…for reciprocal altruism to evolve:"[2]

Glossary of game theory Definitions of a game[edit] Notational conventions[edit] Real numbers The set of players Strategy space , where Player i's strategy space is the space of all possible ways in which player i can play the game. A strategy for player i is an element of Complements an element of , is a tuple of strategies for all players other than i. Outcome space is in most textbooks identical to - Payoffs , describing how much gain (money, pleasure, etc.) the players are allocated by the end of the game. Normal form game[edit] A game in normal form is a function: Given the tuple of strategies chosen by the players, one is given an allocation of payments (given as real numbers). A further generalization can be achieved by splitting the game into a composition of two functions: the outcome function of the game (some authors call this function "the game form"), and: the allocation of payoffs (or preferences) to players, for each outcome of the game. Extensive form game[edit] Cooperative game[edit] , whose value Simple game[edit] .

Conflict resolution research Conflict resolution is any reduction in the severity of a conflict. It may involve conflict management, in which the parties continue the conflict but adopt less extreme tactics; settlement, in which they reach agreement on enough issues that the conflict stops; or removal of the underlying causes of the conflict. The latter is sometimes called “resolution,” in a narrower sense of the term that will not be used in this article. Settlements sometimes end a conflict for good, but when there are deeper issues—such as value clashes among people who must work together, distressed relationships, or mistreated members of one’s ethnic group across a border—settlements are often temporary. Negotiation Research[edit] Negotiation, the most heavily researched approach to conflict resolution, has mainly been studied in laboratory experiments, in which undergraduate participants are randomly assigned to conditions. Negotiation Research Findings[edit] Cultural Differences in Negotiation Findings[edit]

Social trap Social trap is a term used by psychologists to describe a situation in which a group of people act to obtain short-term individual gains, which in the long run leads to a loss for the group as a whole. Examples of social traps include overfishing, energy "brownout" and "blackout" power outages during periods of extreme temperatures, the overgrazing of cattle on the Sahelian Desert, and the destruction of the rainforest by logging interests and agriculture.[citation needed] Origin of the concept[edit] The application of behavioral psychology terms to behaviors in the tragedy of the commons led to the realization that the same short-term/long-term cause-effect relationship also applied to other human traps, in addition to the exploitation of commonly held resources. An individual trap is similar to a social trap except that it involves the behavior of only a single person rather than a group of people. First empirical test and the use of superimposed schedules of reinforcement[edit]

Tragedy of the commons The tragedy of the commons concept is often cited in connection with sustainable development, meshing economic growth and environmental protection, as well as in the debate over global warming. It has also been used in analyzing behavior in the fields of economics, evolutionary psychology, anthropology, game theory, politics, taxation, and sociology. However the concept, as originally developed, has also received criticism for not taking into account the many other factors operating to enforce or agree on regulation in this scenario. Lloyd's pamphlet[edit] In 1833, the English economist William Forster Lloyd published a pamphlet which included an example of herders sharing a common parcel of land on which they are each entitled to let their cows graze. Garrett Hardin's article[edit] The Universal Declaration of Human Rights describes the family as the natural and fundamental unit of society. [edit] As a metaphor, the tragedy of the commons should not be taken too literally. See also[edit]