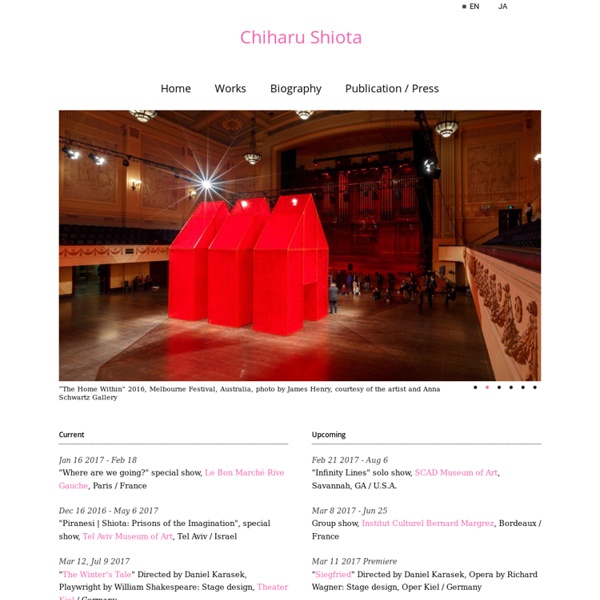 Forms in Nature Forms in Nature The Light sculpture Forms in Nature resembles Darwinist Ernst Haeckel’s drawings . Using a simple action, such as intensifying the brightness at the center of the artwork, the light transforms the space and adds character, as the work throws oversized shadows onto walls and ceilings in the space in which it hangs. The light sculpture Forms in Nature is partly inspired by Ernst Haeckel’s (1834- 1919) detailed plots from nature and is a further development of Hilden & Diaz’ fascination with mirrorings, as they have previously applied in other artworks. Jeff Koons Jeff Koons was born in York, Pennsylvania in 1955. He studied at the Maryland Institute College of Art in Baltimore and the School of the Art Institute of Chicago. He received a BFA from the Maryland Institute College of Art in 1976. Koons lives and works in New York City.

op imagen artística del día - junio «grasshoppermind op art image of the day – june Posted by grasshoppermind on June 2, 2012 Posted in: op art and geometric art. Leave a comment monday july 2 2012 sunday july 1 2012 juliandenarvaez New set of posters made for ADNEditorial Design, Illustration, Print Design2013 I had the pleasure once again of working with Folio art to produce the illustrations for this Douglas and gordon campaign. Special thanks to Chris Belson from Folio Art, for all his hard work and excellent management, and to Ellie Kingsbury also from Folio Art, for always being ready to collaborate. Drawing, Illustration2013 PAPA SANGRE It was really nice to illustrate this amazing application game in which I work with with two wonderful creative teams, Folio art and Something Else. Papa Sangre is a video game with no video.

Sacred Space: New Technological Mandalas by Leonardo Ulian London-based artist Leonardo Ulian (previously) has completed a new body of work titled Sacred Space. Inspired by Hindu and Buddhist symbolism, Ulian continues his exploration of technology and spiritualism with these carefully sculpted mandalas created with soldered computer and radio components. Via Beers.Lambert: Ulian’s reflexive use of the geometrical mandala can also be seen as a nod to his ‘past-life’ as an technican, but through his application, Ulian divorces the electronic components from their origins, giving new life to these (now defunct) technological bits, creating a new type of hybridization that is equal parts spiritualization and contemporary critique: “We live in a society that worships electronic technology,” he states “both for necessity but also because it makes us feel better, not unlike its own new form of fashionable spirituality.” Of particular note in this solo show is an amazing little three-dimensial bonsai tree titled Centrica Bonsai.

Michele Gabriele Reblogged from Paul Barsch’s instagram; a fast look into the BODY HOLES project. BODY HOLES, the third and most elaborate exhibition project by New Scenario, explores the natural orifices of the human body as practical exhibition spaces for art. The show builds on macro shots of artworks by over forty international artists and artist groups, installed in the mouth, nose, ears and more explicit areas. BODY HOLES will be released June 3rd, 2016 as an online exhibition at the 9th Berlin Biennale and can be accessed via the online section “FearOfContent” and newscenario.net.

Drawings #4 « Anton Vill Art Paints Under Construction Sketchbook About Anton Vill is a visual artist from Estonia. Joe Bradley - April 2 - May 3, 2016 Download Press Release PDF (93 Kb) Opening reception: Saturday, April 2, from 6:00 to 8:00pm I like the idea of a work of art containing both irony and sincerity. Let 'em fight it out. Anthony Howe's Kinetic Wind Sculptures Pulse And Hypnotize The Creators Project linked up with Anthony Howe, an Eastsound, WA-based painter and sculpture artist to highlight his work in the medium of surreal kinetic wind sculpture that are initially designed in 3D software. "I was bored with everything being static in my visual world," Howe told us. In other words, he believes sculptures don't have to be stoic designs that are lifeless.

Variable 4 Variable 4 is an outdoor sound installation that translates weather conditions into musical patterns in real time. Using meteorological sensors connected to a custom software environment, the weather itself acts as conductor, navigating through a map of twenty-four specifically-written movements. Every aspect of the piece, from broad harmonic progressions down to individual notes and timbres, is influenced by changes in the environment: wind speed, rainfall, solar radiation, humidity, tropospheric variance, temperature, and more. The resultant composition is performed over an indeterminate duration through eight loudspeakers integrated into the landscape. More information

A Super-Sized Cocoon Made of Packing Tape That You Can Curl Up In Numen/For Use's tape installations are like a massive cocoon humans can crawl through. Numen/For Use They create the pieces by wrapping tape around pre-existing architectural elements. From there, it’s really just a matter of following the natural pattern of the space. They use a wider form of packaging tape. Humans can crawl through openings in the tape.

Vocal Vibrations: Expressive Performance for Body-Mind Wellbeing Tod Machover, Charles Holbrow, Elena Jessop, and Rebecca Kleinberger. Vocal Vibrations explores the relationships between human physiology and the resonant vibrations of the voice. The voice is an instrument everyone possesses. It is incredibly individual, infinitely expressive, and intimately linked to the physical form. In collaboration with Le Laboratoire in Paris and The Dalai Lama Center at MIT, we are examining the hypothesis that the singing voice can influence mental and physical health through physicochemical phenomena and in ways consistent with contemplative practices. Stefan Tiefengraber 2013 - interactive installation exhibited: from 30.01.2014 - at the TIME OUT .01 exhibition ARS ELECTRONICA CENTER Linz/Austria.