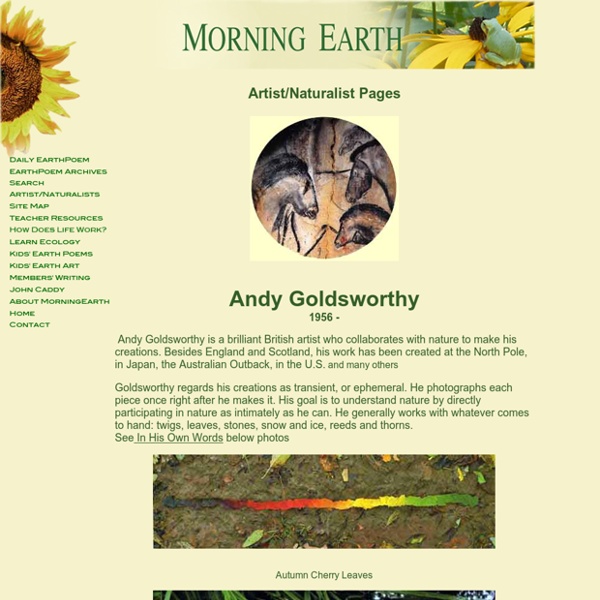 Artist/Naturalist Pages Andy Goldsworthy 1956 - Andy Goldsworthy is a brilliant British artist who collaborates with nature to make his creations. Besides England and Scotland, his work has been created at the North Pole, in Japan, the Australian Outback, in the U.S. and many others Goldsworthy regards his creations as transient, or ephemeral. "I enjoy the freedom of just using my hands and "found" tools--a sharp stone, the quill of a feather, thorns. "Looking, touching, material, place and form are all inseparable from the resulting work. "I want to get under the surface. "Movement, change, light, growth and decay are the lifeblood of nature, the energies that I I try to tap through my work. "The underlying tension of a lot of my art is to try and look through the surface appearance of things. Note 1: Books by Andy Goldsworthy include A Collaboration with Nature; Stone;Wood; Passages, and others. top of page Return to Artist/Naturalist Index

Inspection Yes, he's holding a giraffe. "Inspection" - ink, watercolor and gouache on bristol paper - 14" x 17" Artwork © Lawrence Yang 2009 my blog | my site | purchase inquiries Lisa Orr Gerhard Richter Biography, Art, and Analysis of Works "What I'm attempting in each picture is nothing other than this...to bring together in a living and viable way, the most different and the most contradictory elements in the greatest possible freedom." Synopsis Gerhard Richter is a German painter who originally trained in a realist style and later developed an appreciation for the more progressive work of his American and European contemporaries. Key Ideas Richter has maintained a lifelong fascination for the power of images and painting's long, uneasy relationship with photography: while either medium may claim to reflect or express reality truthfully, either ultimately suggests only a partial, or incomplete view of a subject. Richter borrows much of his painted imagery from newspapers, or even his own family albums. Richter would often blur his subjects and embrace chance effects in his own painting process in order to show the impossibility of any artist conveying the full truth of a subject in its original condition. Most Important Art

sylvia Clary Illian A special exhibition preview reception for this exhibition has been scheduled for Friday, August 24 from 5:00 p.m. to 7:00 p.m. at the Cedar Rapids Museum of Art. This preview is free and open to the public! Ely, Iowa, resident Clary Illian first started making ceramics in the early 1960s, shortly after graduating from the University of Iowa's highly-respected ceramics department and a two year residency with world renowned British ceramicist Bernard Leach. Since then, Illian has created a body of work which not only celebrates the utilitarian qualities she pursues, but also demonstrates her ability to infuse each of her pieces with their own unique character and personality. Accompanying this exhibition is a companion volume highlighting Illian's 50-year career. This exhibition is supported in part by the Momentum Fund of The Greater Cedar Rapids Community Foundation.

Biographie » Les premières années Gerhard Richter was born to Horst and Hildegard Richter in Dresden on February 9, 1932. Having married the year before, Gerhard was their first child, with a daughter, Gisela, arriving in 1936. Horst Richter, with whom Gerhard did not have a close relationship, was a teacher at a secondary school in Dresden.1 Hildegard was a bookseller and, like her father, a talented pianist. She was passionate about literature, and passed on her enthusiasm and knowledge to the young Gerhard. They were, in many respects, an average middle-class family. In an interview with Robert Storr Richter described his early family life as "simple, orderly, structured – mother playing the piano and the father earning money".2 In 1935, Horst was offered a post at a school in Reichenau, then a part of Saxony, now Bogatynia in Poland. On his return, Horst's reception was not as warm as he might have hoped. Despite living in the countryside, Gerhard's experience of the war was nonetheless intense.

Video: H.R. Giger x Pioneer ::: Pink Tentacle 19 Mar 2010 + Video A monster designed by H.R. Giger starred in a 1985 Japanese commercial for the Zone home entertainment system by Pioneer. H.R. H.R. [Images via The Dark Portal of Art] Land Art Jackson Pollock Web Feature Painting 1 Jackson Pollock, Number 1, 1950 (Lavender Mist),1950, National Gallery of Art, Ailsa Mellon Bruce Fund, 1976.37.1 (Click image or hotlink below to enlarge - 446 k) "It is impossible to make a forgery of Jackson Pollock's work," Time magazine critic Robert Hughes claimed in 1982. It is a telling comment that gets to the heart of Pollock's authenticity as an artist." terms of use | home | Copyright © 2014 National Gallery of Art, Washington, DC

Apocalyptic Sculptures by Kris Kuksi Kris Kuksi is a 36-year-old sculptor from Missouri, USA. His sculptures are created out of discarded toys, old mechanical parts and other tossed away items. The sheer amount of detail within is work is truly incredible. He is able to create entire worlds that almost appear frozen in time. According to Kuksi’s artist statement, his work is “feeling that he has always belonged to the ‘Old World’. Yet, Kris’ work is about a new wilderness, refined and elevated, visualized as a cultivation emerging from the corrupt and demoralized fall of modern-day society. In any case, Kuksi’s mindblowingly detailed toy sculptures remind us that trash and discarded materials can be refashioned into nearly anything we want.

Street Art Jackson Pollock. Number 18. 1950 Jackson Pollock b. 1912, Cody, Wyoming; d. 1956, The Springs, New York Biography Number 18, 1950. Oil and enamel on Masonite, 22 1/16 × 22 5/16 inches (56.0 × 56.7 cm). Jackson Pollock's first fully mature works—dating between 1942 and 1947—use an idiosyncratic iconography he developed in part as a response to Surrealism. Sensibilities - Myths and Legends of Russia: the Illustrations Let us have more pictures, shall we? Several of us are experiencing December blues and quite unable to rouse ourselves to the spirit of the season. I hope these may provide a few moments' entertainment at the very least. I never did manage to post these illustrations here. I did post a link to my dA gallery instead a few months ago, but links are no fun. Besides, there are fewer illustrations there. Cross-posted at told_tales and storybookland I feel so silly and awkward sometimes, posting these things in communities; especially having to sign off with my name as the illustrator. 'She waved her right hand, and lakes and woods appeared; she waved her left hand, and various birds began to fly about'Illustration for The Frog Princess. 'I'm Rumbling Thunder! 'Ivashko too walked and walked, and met the three-headed dragon'Illustration for The Three Kingdoms. ‘The fox is carrying me away … Cat Cotonaevich, rescue me!’ This is one of two of the earliest illustrations which I completed.

The way he incorporates nature and involves no expectations of it surviving for a long period of time is what draws my attention. I found a resource that quotes Golsworthy describing his work: why, how, and where he creates his work. This quote below is one that stood out the most to me.

“Movement, change, light, growth and decay are the lifeblood of nature, the energies that I I try to tap through my work. I need the shock of touch, the resistance of place, materials and weather, the earth as my source. Nature is in a state of change and that change is the key to understanding. I want my art to be sensitive and alert to changes in material, season and weather. Each work grows, stays, decays. Process and decay are implicit. Transience in my work reflects what I find in nature.” by sydneyh Nov 25