In a world where we are supposed to work and play hard, oftentimes it is tough to take a step back and put things in perspective. 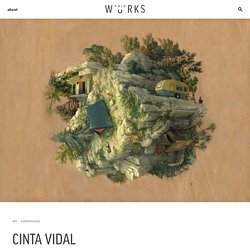 But when you do, you’ll learn how to see things differently. With her gravity-defying paintings, Spanish illustrator Cinta Vidal does just that; she forces you to approach the everyday from a new angle. Next to your personal work, you work in scenography too — how, if so, has that influenced your personal work? My work in the scenography workshop has influenced me a lot. Scenography is a job that focuses more on spaces than on people. Why did you start to make these ‘un-gravity constructions’? I always carry a notebook with me and I am constantly drawing. It seems you paint domestic scenes. Massive Chandelier Made of 10,000 Swarovski Crystals and 3,000 LED Lights. Outside of London, Sydney has been all the rage these days as the metropolis that's been putting on some dazzling outdoor art events. 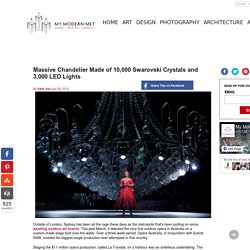 This past March, it debuted the very first outdoor opera in Australia on a custom-made stage built over the water. Over a three week period, Opera Australia, in conjunction with Events NSW, created the biggest single production ever attempted in that country. Staging the $11-million opera production, called La Traviata, on a harbour was an ambitious undertaking. The project involved 140 artists, 570 crew members and 60 volunteers. Not only did spectators get to watch an actual opera staged on the water, they witnessed one massive chandelier hung from a 26-meter crane. The dramatic chandelier was not only an amazing adornment, it was an integral part of the show. Collectionneurs - Phil.Macquet. Portrait – Lara Fabian – Behind the scenes Phil Macquet vient de signer le portrait de Lara Fabian, support visuel de son nouvel album. 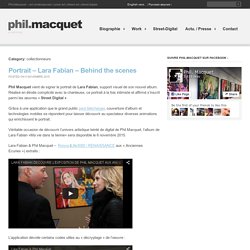 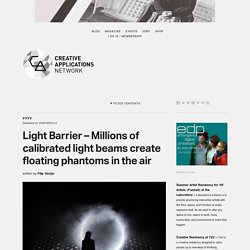 First shown at New Media Night Festival, Nikola-Lenivets Park (4–6 June 2014), the installation creates phantoms of light in the air by crossing millions of calibrated beams; creating floating graphic objects which animate through space. A fascination with natural light drove the technique of the impressionist painters, they explored new qualities of colour and the trail of time.

Kimchi and Chips’ study of digital light discusses a new visual mechanic, their installation adding to the visual language of space and light. POETIC LAB. Prismatica, raw design, world architecture news, architecture jobs. The winning projects from the annual Luminotherapie competition at the Quartier des Spectacles in Montreal, Quebec have been brought to life in time for the holiday season. 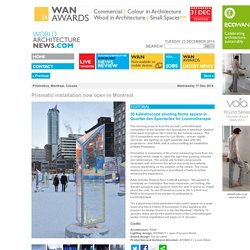 The 2014 competition was won by Luz Studio - whose ‘digital carnivals’ are lighting up eight separate sites with film projections - and RAW, with a colour-shifting art installation entitled Prismatica. Prismatica is comprised of 50 prisms measuring more than 2m in height, which rotate to catch the light from passing vehicles and street lamps. The prisms are formed using panels laminated with dichronic film which transmits and reflects colours depending on the position of the viewer. The visual display is accompanied by a soundtrack of bells to further enhance the experience. RAW director, Roland Rom Colthoff explains: “We wanted to contribute an installation that was immersive, yet inviting.

Play Pong At The Traffic Light. Back in 2012 we wrote about an urban game played while waiting at the traffic light. 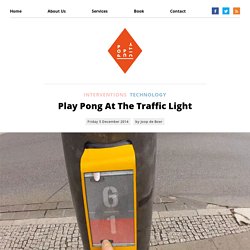 We are happy to hear and spread the word that the project got the green light and that the game is now installed at one of the intersections in Hildesheim, Germany. Sandro Engel and Holger Michel, two interaction design students at HAWK University have launched the game in late November and so far it has been a success. IF I architecture, scénographie, design, mapping I APOPHENIA. Æpɵˈfiːniə V.0.0 Installation audio-visuelle de 16 lampes α. 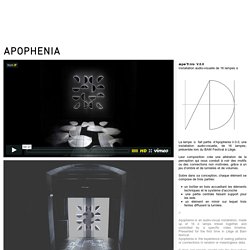 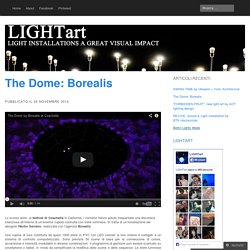 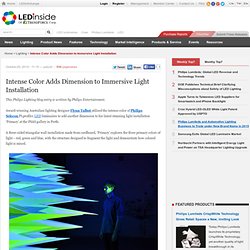 Award-winning Australian lighting designer Flynn Talbot utilized the intense color of Philips Selecon PLprofile1 LED luminaires to add another dimension to his latest stunning light installation ‘Primary’ at the PSAS gallery in Perth. A three-sided triangular wall installation made from cardboard, ‘Primary’ explores the three primary colors of light – red, green and blue, with the structure designed to fragment the light and demonstrate how colored light is mixed.

“For this project I needed intense color and absolutely pure light,” explains Talbot. “The installation is purposefully designed to break up light into many shadows but unless the light source was completely even, the effect and the magic would have been lost. I needed a smooth and color-rich shift between primary colors, so I chose the Philips Selecon PLprofile1 LED luminaires. Intense Color Adds Dimension to Immersive Light Installation. James Clar's Light Sculptures. Written by Mateus Andrade New York based artist James Clar explores in his light sculptures various possibilities of visual representations and the consequences of technology’s unyielding presence. 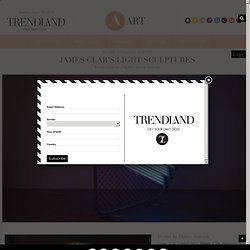 Among the artist’s wide range of pieces, it’s possible to focus on his light installations as stand-alone pieces or, better yet, as a solid body of work. Experimenting with an assortment of materials such as acrylic, metal and fiberglass and, obviously, fluorescent lights, Clar skillfully showcases numerous subject matters: from symbolic reductions or augmentation of an event, form experimentations, pattern replications, to sophisticated criticisms of the pitfalls of daily technology and information. The extension of a pixel beyond the screen limits to become a complex three dimensional work is one of the many insights from the artist, an exploration of his extensive library is well recommended for media critique and installation art enthusiasts. Interactive Video Projection Mapping on Sculptures. I’ve tried to lay low on the abundance of video projection mapping projects that have flooded art and design blogs the past year or so, and I think I surrendered only once to Macula’s Prague clock.

And then this awesome project appeared in my inbox this morning. A collaboration between Sober Industries and Studio Rewind who decided to point the video projectors elsewhere, onto customized wood-paneled sculptures of animals. Both sculptures were projected with mapped visuals. New in this project was the interactive part. Box: A Groundbreaking Demonstration at the Intersection of Robotics, Projection-Mapping, and Software.

Produced by Bot and Dolly, a San Francisco-based design and engineering studio, this amazing clip was filmed entirely in camera and demonstrates a mixture of robotically controlled monitors, projection-mapping and choreographed human interaction. Via their website: “Box” explores the synthesis of real and digital space through projection-mapping on moving surfaces. The short film documents a live performance, captured entirely in camera. Bot & Dolly produced this work to serve as both an artistic statement and technical demonstration. It is the culmination of multiple technologies, including large scale robotics, projection mapping, and software engineering.

Ephemeral Rays: Hundreds of Suspended Light Bulbs in a UK Dockyard. Installed earlier this summer at the Chatham Historic Dockyard, Ephemeral Rays is a new work by artist Charlotte Smith. The piece consists of several hundred lights on filaments that fill a large window of a galvanizing shop. Of the work she shares: Originally installed at Chatham Historic Dockyard, Ephemeral Rays depicted the volume of a fleeting ray of light beaming through a window of the Galvanising Shop.

Reinstalled at Turner Contemporary the work evolved into a new form; drawing on the stunning expanse of sea and sky, the infinite horizon line was the focal point of the composition. Miya Ando’s Flotilla of 1,000 Bioluminescent Leaves. Last year artist Miya Ando traveled to Puerto Rico where she released 1,000 non-toxic resin leaves coated with phosphorescence into a small pond. During the day the leaves would “recharge” and at night would give off a ghostly, ethereal glow much like the light of a firefly. Titled Obon, the installation was inspired by a Japanese Buddhist festival of the same name that honors the spirits of one’s ancestors. Landscape Light Sculptures. Artist Barry Underwood photographs wonderfully mysterious light installations that he installs on-site in forests, mountainsides, or near lakes and rivers. Via his artist statement: By reading the landscape and altering the vista through lights and photographic effects, I transform everyday scenes into unique images.

Light and color alter the perception of space, while defamiliarizing common objects. Space collapses, while the lights that I install appear as intrusions and interventions. This combination renders the forms in the landscape abstract. Landscape Light Installations by Barry Underwood. Drawing inspiration from early theatrical training, and influenced by methods of staged photography and set design, artist Barry Underwood (previously) transforms ordinary landscapes into something out of science fiction.

The artist utilizes LED lights, luminescent material, and other photographic effects to create fleeting abstract landscapes that are influenced by both accidental and incidental light. He shares via his artist statement: A Reflective Palace of Rainbows by Kimsooja. Created in 2006 by multidisciplinary artist Kimsooja, To Breathe – A Mirror Woman was an elaborate installation at the Palacio de Cristal, Parque del Retiro, in Madrid.

Originally built in the late 1880s to house a collection of flora and fauna from the Philippines, Kimsooja transformed the Palacio de Cristal into a multisensory sound and light experience. A special translucent diffraction film was used to cover the windows to create an array of naturally occurring rainbows which were in turn reflected by a mirrored surface that covered the entire floor. Church Floor Covered with Magic Carpet of Light by Miguel Chevalier. Intersections: An Ornately Carved Wood Cube Projects Shadows onto Gallery Walls. Intersections, 2013. 6.5′ Cube, projected Shadows: 35′ x 32′. A Maldives Beach Awash in Bioluminescent Phytoplankton Looks Like an Ocean of Stars. Stunning 20 Miles of Colorful Ribbons Adorn Grace Cathedral.