Watch Sayed's Vine "#Israeli Settler runnin over #Palestinian. Why isn't this breaking news? Where is the Justice? All I see is Injust actions. #Freepalestine" Israel plans to demolish 13,000 Arab buildings in West Bank, UN says. Israel plans to demolish up to 13,000 structures, most of them on privately owned Palestinian land in the part of the illegally occupied West Bank under full Israeli military and civil rule, a UN report has found. 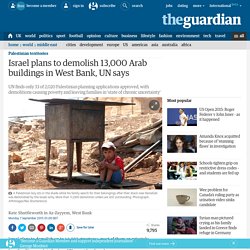 Between 1988 and 2014, Israel’s Civil Administration, the governing body that operates in the West Bank, issued 14,000 demolition orders, of which more than 11,000 are still outstanding and could result in the demolition of up to 13,000 structures owned by Palestinians in Area C, including houses, sheds and animal shelters, according to the report by the UN Office for the Coordination of Humanitarian Affairs (OCHA). In Area C, according to the Israeli human rights group B’Tselem, Israel retains control of security and land management and “views the area as there to serve its own needs”. According to Israeli Civil Administration data, Palestinians submitted 2,020 applications for building permits in Area C between 2010 and 2014 and only 33 (1.5%) were approved. Terrina Aguilar sur Twitter : "#IDF #Palestine #Israel... US Court Orders Palestine to Pay $10M to Israel Bomb Victims.

Earlier this year, a jury found the PA and the PLO liable to pay US$655 million in damages for allegedly carrying out two attacks in 2002 and 2004. 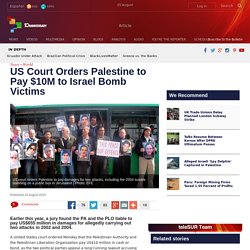 A United States court ordered Monday that the Palestinian Authority and the Palestinian Liberation Organization pay US$10 million in cash or bond, as the two political parties appeal a long-running lawsuit accusing them of attacking Israel. U.S. District Judge George Daniels in Manhattan ordered the payment even after the U.S. government intervened earlier this month telling the court to “carefully consider” the PA's financial condition, saying too high a bond could compromise its ability to function. Deputy Secretary of State Antony Blinken also wrote to the court to warn that depriving the Palestinian Authority of “a significant portion of its revenues” could destabilize the region even further and undermine U.S. -led peace efforts, reported the Wall Street Journal earlier this month. The IMEU sur Twitter : "Congress holds hearing on Palestinian-led movement, without Palestinians. Trial of Abu Khdeir killers 'a sham', says family.

As Hussein prepares to mark a year on Thursday since his son's untimely death, the 50-year-old electrician recalls a bright, sporty boy who loved dabke, a traditional Palestinian dance, and was known for his sharp wit. 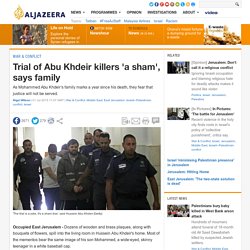 "I took him to work with me sometimes, teaching him the skills to be an electrician. One day his teacher asked me 'Why are you training him in this work - Mohammed is going to be a comedian, he's always making the class laugh,'" he recalled. The community here remembers the teenager in a similar light. Fer Gunay sur Twitter : "Tribute from Iranian army to #Palestine Via @AbbsWinston... Sander Faas sur Twitter : "Het was warm op De Dam. En drukker dan verwacht. #gaza #palestine #bds #israel #amsterdam... Israeli Navy preparing to take over Gaza-bound flotilla. Four boats carrying 47 pro-Palestinian activists will be welcomed with letter from PM: 'It looks like you took a wrong turn. 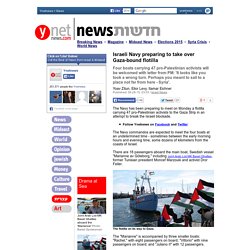 Perhaps you meant to sail to a place not far from here - Syria'. The Navy has been preparing to meet on Monday a flotilla carrying 47 pro-Palestinian activists to the Gaza Strip in an attempt to break the Israeli blockade. Follow Ynetnews on Facebook and Twitter The Navy commandos are expected to meet the four boats at an undetermined time - sometimes between the early morning hours and evening time, some dozens of kilometers from the coasts of Israel. French police falsely arrest anti-Zionist Jewish leader after "murder" hoax.

In the early hours of Tuesday morning, Pierre Stambul and his partner were violently awoken by police at their home in the French port city of Marseille. 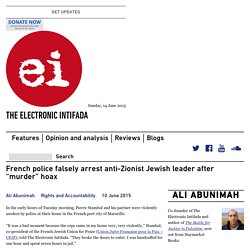 “It was a bad moment because the cops came in my home very, very violently,” Stambul, co-president of the French Jewish Union for Peace (Union Juive Française pour la Paix – UFJP), told The Electronic Intifada. “They broke the doors to enter. I was handcuffed for one hour and spent seven hours in jail.” The ordeal was the result of an anonymous, false tip-off to police that Stambul had murdered his wife. Stambul, a strong critic of Israel, believes it was intended to stop him giving a speech in Toulouse that evening on anti-Semitism and anti-Zionism. 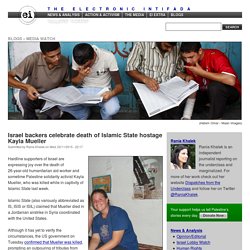 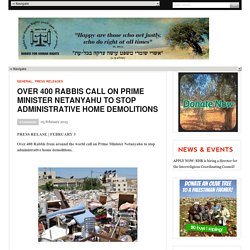 The letter below urges Netanyahu to stop the State’s opposition to a High Court petition submitted by Rabbis for Human Rights seeking to put an end to administrative demolitions by allowing Palestinian villages in Area C to participate in planning and developing their communities. While we wait for the decision of the judges, these rabbis and cantors are asking the State, at its own initiative, to implement moral, reasonable and fair planing and zoning principles that are in-line with international law and Jewish tradition.

So far, over 400 rabbis and cantors from Israel, the USA, Canada, Britain and other countries have signed the call to Prime Minister Netanyahu to stop the practice of home demolitions. Stolen Beauty sur Twitter : "Canada and Israel sign agreement for joint fight against #BDS #Palestine... Memorandum of Understanding between the Department of Foreign Affairs, International Trade and Development of Canada and the Ministry of Foreign Affairs of the State of Israel regarding Public Diplomacy Cooperation. Rania Zabaneh sur Twitter : "To be a journalist in #Palestine. Meet Abed Qusini, helping girls pass by Israeli troops during a standoff in Qusra: Libor Von Schönau sur Twitter : "BREAKING: The people rose up and spoke one after another shutting #NYC City Council hypocrisy down! #Palestine #Gaza. 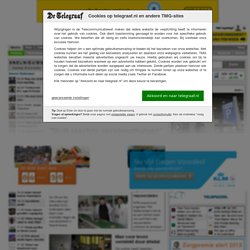 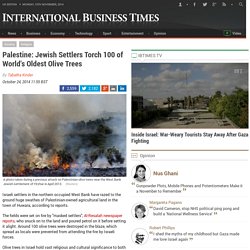 (Reuters) Israeli settlers in the northern occupied West Bank have razed to the ground huge swathes of Palestinian-owned agricultural land in the town of Huwara, according to reports. The fields were set on fire by "masked settlers", Al-Resalah newspaper reports, who snuck on to the land and poured petrol on it before setting it alight. Around 100 olive trees were destroyed in the blaze, which spread as locals were prevented from attending the fire by Israeli forces. Olive trees in Israel hold vast religious and cultural significance to both Jews and Palestinians. Israelis torturing non-Jewish children. 2014 Australian documentary film. Viewer discretion. Steepest cost in $4B plan to rebuild Gaza likely political will. Karin Laub, The Associated Press Published Sunday, October 5, 2014 7:13AM EDT Last Updated Sunday, October 5, 2014 5:49PM EDT KHUZAA, Gaza Strip -- More than five weeks after the Israel-Hamas war in the Gaza Strip, tens of thousands of people whose homes were destroyed or badly damaged in the fighting still live in classrooms, storefronts and other crowded shelters. 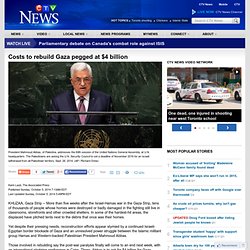 In some of the hardest-hit areas, the displaced have pitched tents next to the debris that once was their homes. Yet despite their pressing needs, reconstruction efforts appear stymied by a continued Israeli-Egyptian border blockade of Gaza and an unresolved power struggle between the Islamic militant group Hamas and Western-backed Palestinian President Mahmoud Abbas. Israel bars Palestinian men under 50 from entering Al-Aqsa Mosque. Israeli forces have barred men under the age of 50 from entering the Al-Aqsa Mosque in the occupied East al-Quds (Jerusalem), in a new move to further restrict Palestinians' access to the religious site. "Police prevent men under 50 and West Bankers from entering the Al-Aqsa compound or Friday prayers," said Sheikh Azzam al-Khatib, director general of the Organization for Muslim Endowments and Al-Aqsa Affairs. The Israeli police claimed that the restrictions were imposed upon reports of possible planned demonstrations after Friday prayers.

On Sunday, Paris witnessed marches in support of Palestine. The demonstrations were attended by 30,000 people according to protesters, or 7,000 according to the police, and were marred by clashes between pro-Palestinian protesters and people who came out of a nearby synagogue yielding furniture and weapons which they hurled at the demonstrators. "I want everyone to show a sense of responsibility, I am the Minister of the Interior and therefore it is my duty to guarantee safety for everyone.

Living in Gaza as the bombs fall - my story - Blogs. The last two nights have been terrible. So many explosions have occurred close by that there is now a constant ringing in my ears. But I can’t complain too much, especially when entire families around me are being killed. We have become refugees in our own country. Many families have left their homes in the north seeking refuge in UNRWA schools (not that it’s safer or anything, Israel bombed them during Operation Cast Lead). An estimated 4,000 people left everything behind to seek peace, but that is nowhere to be found in Gaza.

The American version of why the current round of negotiations between Israel and the Palestinians failed is fundamentally different to the one presented by Israeli officials. The list of those to blame for this failure is also very different. From the US perspective, the issue of the settlements was largely to blame. Follow Ynetnews on Facebook and Twitter. Damianjread : @docjazzmusic #Palestine... Sabbah : The Humanitarian Impact of... The Humanitarian Impact of Gaza's Electricity and Fuel Crisis. By Haitham Sabbah – Sabbah Report § UN Report on Palestine: Military Occupation, Apartheid, Torture – Israeli Violations are “Deliberate, Organised, and Institutionalised”

Outlandish1311 : Miko peled son of IDF general... Man killed on border identified as Jordanian judge. A Palestinian man was shot and killed at an Israeli-Jordanian border crossing Monday morning, after reportedly attacking a soldier there. The incident occurred at the Allenby Bridge border crossing in the Jordan Valley, connecting the West Bank to Jordan. The dead man was identified by the Palestinian Ma’an news agency as Nablus resident Raed Zeiter, 38. According to a Facebook page associated with Palestinian Authority President Mahmoud Abbas’s office, Zeiter was a Jordanian passport holder and served as a civil court judge in the Hashemite Kingdom.

According to the Israel Defense Forces, Zeiter attacked one of the soldiers and attempted to snatch a gun from him. Een avond over Palestina & geweldloos verzet. - YWCA Nederland. ALRAY.