Beaty in any context

A new study carried out by the ESO’s Very Large Telescope and the NASA/ESA Hubble Space Telescope has revealed for the first time that dark matter may well interact with itself — a discovery that, at first glance, seems to contradict what we thought we knew about the nature of this invisible mass. 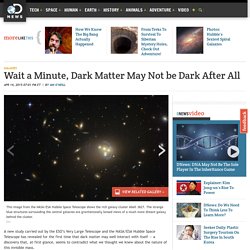 So what’s going on? ANALYSIS: Dark Matter Just Got Darker (and Weirder) Using the advanced MUSE instrument at the VLT and Hubble, astronomers were able to zoom in on 4 colliding galaxies within the galaxy cluster Abell 3827. This cluster is huge and is often the hunting ground for enigmatic gravitational lenses. All galaxies are comprised primarily of dark matter. So when observing Abell 3827, astronomers know that dark matter is there through observations of gravitational lenses — starlight from galaxies behind the cluster becomes warped and bent around curved spacetime. ANALYSIS: LHC Ready to Hunt Down Mystery Dark Matter Particles What’s causing this lag? Source: ESO. The Institute of Physics said the number of UK students applying to study for a degree in physics had risen by 40 per cent over four years, while numbers wishing to take physics at A-level had grown by 3 per cent from 2012 to 2013. 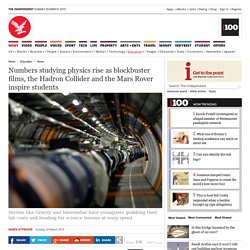 Oxford University says it has seen applications for its physics undergraduate degree rise by a third over five years. And a new facility, the Oxford Centre for Astrophysical Surveys, opened last year with the help of a £1.5m grant from the Hintze Family Charitable Foundation, with the aim of funding a team of Oxford research fellows and graduate students hoping to answer the fundamental questions about the universe. Undergraduate applications for physics and astronomy at Manchester rose by 37 per cent between 2008 and 2014, while its postgraduate applications increased by 40 per cent over the same period. The university said it is extending its physics building to cope with the extra students. Quantum mechanics and Albert Einstein’s theories are complex subjects. 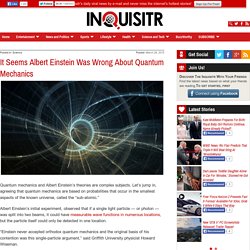 Let’s jump in, agreeing that quantum mechanics are based on probabilities that occur in the smallest aspects of the known universe, called the “sub-atomic.” Albert Einstein’s initial experiment, observed that if a single light particle — or photon — was split into two beams, it could have measurable wave functions in numerous locations, but the particle itself could only be detected in one location. “Einstein never accepted orthodox quantum mechanics and the original basis of his contention was this single-particle argument,” said Griffith University physicist Howard Wiseman. Einstein was unhappy with his theory and could not imagine a universe based on uncertainty, stating that “God does not play dice with the universe.” However, it appears that his disparagement was wrong. Griffith University have devised an experiment that confirms Einstein’s original idea.

A paper in Physics Letters B has raised the possibility that the Large Hadron Collider (LHC) could make a discovery that would put its previous triumph with the Higgs Boson in the shade. 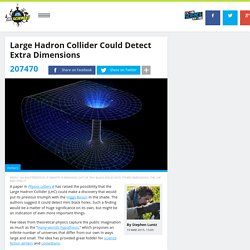 The authors suggest it could detect mini black holes. Such a finding would be a matter of huge significance on its own, but might be an indication of even more important things. Few ideas from theoretical physics capture the public imagination as much as the “many-worlds hypothesis,” which proposes an infinite number of universes that differ from our own in ways large and small. The idea has provided great fodder for science fiction writers and comedians. However, according to Professor Mir Faizal from the University of Waterloo, "Normally, when people think of the multiverse, they think of the many-worlds interpretation of quantum mechanics, where every possibility is actualized," he said to Phys.org.