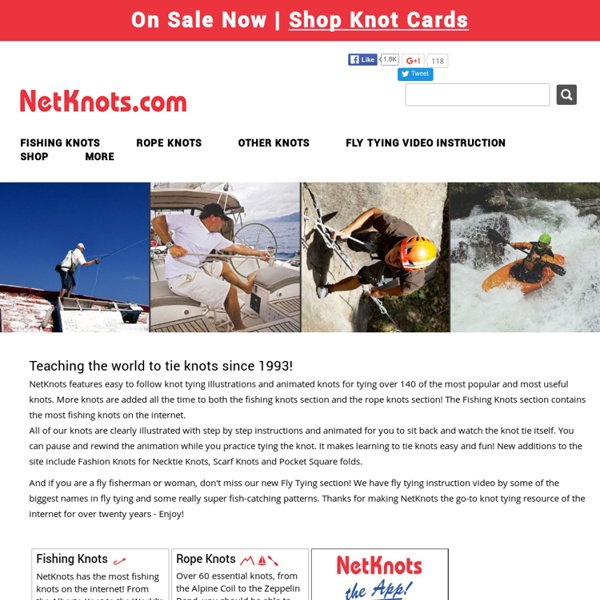 © Copyright 2014 John E Sherry. All rights reserved Disclaimer: Any activity involving rope can be dangerous and may even be life threatening! Knot illustrations contained in this web site are not intended for rock climbing instruction. Many knots are not suitable for the risks involved in climbing. Seek professional instruction.

Trilene Knot - How to tie a Trilene Knot © Copyright 2014 John E Sherry. All rights reserved Disclaimer: Any activity involving rope can be dangerous and may even be life threatening! 9 skills they don't teach in school (but should) In Michigan, legislators are mulling over a plan intended to increase the number of CPR-trained members in their community by requiring that students learn the lifesaving skill before they graduate from high school. If it passes, the new bill would require schools to teach CPR and the use of defibrillators to students at least one time between grades 7 and 12. In an age of standardized testing, students are spending more time learning how to fill in a circle with a pencil and less time learning skills that might help them get by — and get ahead — in life. Here are nine courses we wish more schools would add to their curriculum:

braid « It's Knot Art A square sinnet made from black paracord. This is the next piece in my small collection of chain sinnets. This is the simplest in structure, being made of only two loops. In the days of commercial sailing, sailors had to work continually on maintenance. They had only natural materials for use in hull and rigging. Once a vessel was launched, it started a decline into oblivion.

Camping Knots for Wilderness Survival By Filip Tkaczyk Knowing how to tie good camping knots is an invaluable skill in wilderness survival situations. Its also a great asset when having fun in the outdoors. There are a wealth of different knots out there that you can learn to tie. How to Tie Climbing Knots Climbing Knots Welcome to Climbing Knots These animated knots are for climbers, rescue workers, arborists, tower-climbers, and others who use rope in man-carrying applications. Select the knots from: the index above left; the pictures above; or the Climbing Usage page. Selection How to teach your kids about their brain. - Your Brain Health Knowledge is power. So learning about the brain lays strong foundations for emotional intelligence. Wise words from clinical psychologist Dr Hazel Harrington the author of this week’s blog post.

The 27 best free VST plug-ins in the world today The internet is now awash with free VST plug-ins - you’ll find instruments, effects and others that defy categorisation. However, while it’s great to have so many to choose from, this weight of numbers means that it’s difficult to work out what’s worth having and what you should steer clear of. Of course, you won’t lose out financially by downloading a dud or two, but to save you a lot of time, effort and potential disappointment, we’ve compiled a list of the best free VST (and Audio Units) plug-ins in the world today. Our shortlist was put together based on your nominations from 2010, when we ran our first poll, and 2012, when we put the word out that our list was being updated. The final positions were decided by MusicRadar users votes.

Constrictor knot History[edit] First called "constrictor knot" in Clifford Ashley's 1944 work The Ashley Book of Knots, this knot likely dates back much further.[5] Although Ashley seemed to imply that he had invented the constrictor knot over 25 years before publishing The Ashley Book of Knots,[1] research indicates that he was not its originator.[6] Ashley's publication of the knot did bring it to wider attention.[7] Although the description is not entirely without ambiguity, the constrictor knot is thought to have appeared under the name "gunner's knot" in the 1866 work The Book of Knots,[8][9] written under the pseudonym Tom Bowling.[10] in relation to the clove hitch, which he illustrated and called the "builder's knot".

Four knots to make paracord into a useful tool. Paracord is an awesome multitool, used everywhere from the wild blue yonder to the deepest caverns. But like any good tool it is only as good as the knowledge the user has about the tool. With most people out there using bungee cords & ratchet straps it seems that paracord is being used for nothing more than friendship bracelets for grown men. This is a shame because for less then the price of a few cheap bungee cords & some to short to be helpful straps You can get yourself hundreds of feet of paracord. The key to getting the most out of the paracord is good knot work. The first thing you need to know is what makes a good knot. Deckadance Deckadance (often referred to as DD) is a DJ console and mixing tool developed by Image-Line software.[1][2] Initially released in May 2007,[3] it operates on Windows and Mac OS X, and comes in a House Edition and Club Edition. The latter has support for timecoded vinyl.[4] History[edit] Software overview[edit] Version 1.2 on OS X, first for Macs

The Monkey's Fist Knot This knot is used to tie the end of a climbing rope into a tight ball so the rope can be thrown. When a rope is coiled it is difficult to throw long distances because the coils of the rope catch the wind. With the monkey's fist knot tied to the end of a small coil, it can be thrown much further.