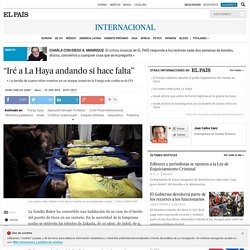 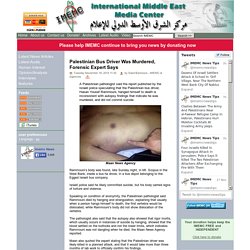 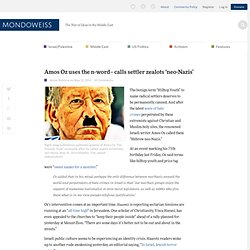 May 10, 2014 (Graphic: The Jewish Independent) Flying Paper: A Documentary Film. Love Stories for Social Justice. Change depends on people. April 15 2013: Ten peacebuilders in Israel and Palestine are asked: 'What is your motivation to work towards peace? 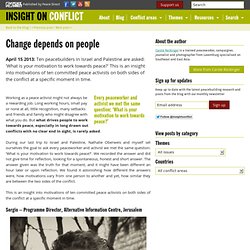 ' This is an insight into motivations of ten committed peace activists on both sides of the conflict at a specific moment in time. Every peaceworker and activist we met the same question: ‘What is your motivation to work towards peace?’ Working as a peace activist might not always be a rewarding job. Long working hours, small pay or none at all, little recognition, many setbacks and friends and family who might disagree with what you do. Nablus: Surrounded by Israeli settlements - Features. On December 6, Israeli settlers destroyed a Palestinian car and vandalised a house in Jalud, a village in the West Bank's Nablus governorate. 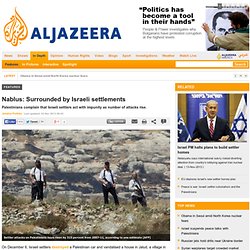 Across the property, the settlers had reportedly scrawled the words "price tag". The term "price tag" refers to attacks carried out by settlers against Palestinians as revenge for Israeli government actions against settlers, such as demolitions or forced evacuations of illegal outposts. Mass Palestinian grave found in Tel Aviv - Middle East. The remains of dozens of Palestinians killed by Israelis in fighting during the war of 1948 which led to the creation of the state of Israel have been found in a mass grave in Tel Aviv's Jaffa district. 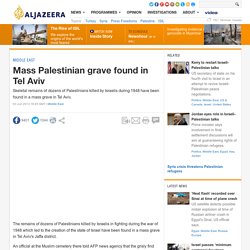 An official at the Muslim cemetery there told AFP news agency that the grisly find occurred on Wednesday when ground subsided as workers carried out renovations, revealing six chambers full of skeletons. Jaffa fisherman Atar Zeinab, 80, says that as a teenager during the final months of fighting in 1948, he helped to collect the Arab dead in the area south of Jaffa and bring them for hasty burial in the cemetery, the area's main graveyard. "I carried to the cemetery 60 bodies during a period of three or four months," he told AFP. Rawabi. Coordinates : Site of Rawabi Rawabi ( Arabic : روابي ‎, meaning "The Hills") [ 1 ] [ 2 ] is the first Palestinian planned city [ 3 ] [ 4 ] in the West Bank . [ 5 ] [ 6 ] Rawabi is to be located near Birzeit and Ramallah . 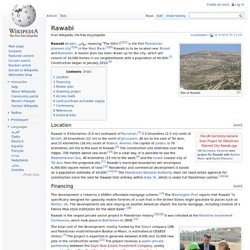 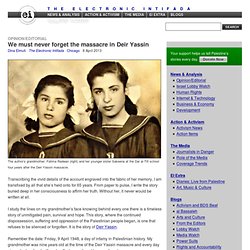 From paper to pulse, I write the story buried deep in her consciousness to affirm her truth. Without her, it never would be written at all. I study the lines on my grandmother’s face knowing behind every one there is a timeless story of unmitigated pain, survival and hope. This story, where the continued dispossession, suffering and oppression of the Palestinian people began, is one that refuses to be silenced or forgotten. Muertes Palestinas & Israelíes: Cronología de la Violencia. Rona Sela, Curator. The Palestinian Other The Zionist leadership belived that in order to establish its control over a conflict-ridden country and gain the support of international public opinion for the establishment of an independent Jewish state, it must, inter alia, establish an unequivocal self-promotion system. 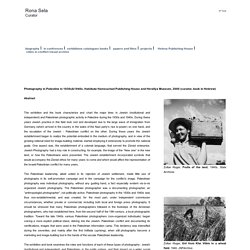 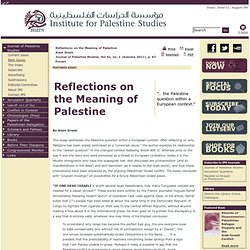 After reflecting on why Palestine has been widely embraced as a “universal cause,” the author explores its relationship to the “Jewish question” in the changed context following World War II: Whereas prior to the war it was the Jews who were perceived as a threat to European civilization, today it is the Muslim immigrants who have the scapegoat role. Also discussed are philosemitism (and its manifestations in the West) and anti-Semitism (as it relates to the Arab world), and how these phenomena have been impacted by the ongoing Palestinian-Israeli conflict. The essay concludes with “utopian musings” on possibilities for a future Palestinian-Israeli peace. ”IF ONE DEAD ISRAELI is worth several dead Palestinians, how many Congolese corpses are needed for a Gazan shroud?” KADAITCHA. Neturei Karta - Orthodox Jews United Against Zionism. Existence is Resistance. South Jerusalem — A Progressive, Skeptical Blog on Israel, Judaism, Culture, Politics, and Literature.

Israel / Palestine. History of the Israel / Palestine Conflict - perspectives... Dissident Voice. Popular Struggle Coordination Committee. IsraelPalestine Based Photo Collective. Israel / Palestine. Land of Hope and Dreams by Amnon Gutman and Kim Frumin. Land of hope and dreams In June 2002, the government of Israel decided to erect a physical barrier to separate Israel and the West Bank in an attempt to minimize the entry of Palestinian terrorists into the country. This has partially solved today's terrorist infiltration problem but has caused grief and pain to innocent Palestinians in every area in which it was constructed, along the 1967 Green Line. Since 2009, I have been documenting the movement and livelihood of Palestinian people, on their way into Israel, via gaps and loopholes in the separation barrier, in the southern region of Mt.

Hebron.These Palestinians endure terrible conditions as illegal workers, sleeping rough in river creeks, under bridges, on building sites and under highways, trying to avoid getting caught. Hundreds Protest in Solidarity with Hunger Striking Prisoners. Protests in solidarity with political prisoners in front of Ramle Prison: Oren Ziv/Activestills Hundreds of Palestinian grassroots activists, joined by Israeli and international supporters mobilized today, as the political prisoners Hunger Strike for Dignity enters its 17th day. Some 1500 Palestinian prisoners are in hunger strike since April 17; eight other Palestinian political prisoners are hunger striking for over 50 days and are in critical medical conditions. +972 Magazine: Independent commentary from Israel & the Palestinian territories.

Book review: ‘In Your Eyes a Sandstorm’ Bedouin citizens of Israel from al-Arakib (Photo: Mya Guarnieri) The Palestinian Authority’s United Nations bid for statehood is, in a word, divisive. It has set America and Israel adrift from the international community—confirming, yet again, the United States’ deep bias towards Israel. Edward Said documentary revisits Oslo period. I came across this great documentary called “In Search of Palestine” from a friend that was aired on the BBC in 1998. It is about the return of Edward Said to Palestine for the first time since his exile in 1948.

For anyone interested in revisiting the pre-Second Intifada Oslo period, it is a spectacular look at the situation on the ground with the preeminent Palestinian scholar of his time. It also includes interviews with a number of interesting personalities including Israel Shahak, Azmi Bishara, Mahmoud Darwish, Ibrahim Abu-Lughod, Daniel Barenboim, and others. For those who don’t know Edward Said, who passed away in 2003, he was a Professor of English and Comparative Literature at Columbia University and author of several renowned and influential books, including Orientalism.

Blogging 4 Human Rights & Liberation of Palestine! فلسطين. The Palestinian BDS National Committee website. Co-op boycotts exports from Israel's West Bank settlements. The Co-operative Group stresses that its move is not an Israeli boycott and that it will use other suppliers in the country that do not source from illegal settlements. Photograph: Graham Turner for the Observer The Co-operative Group has become the first major European supermarket group to end trade with companies that export produce from illegal Israeli settlements.

The UK’s fifth biggest food retailer and its largest mutual business, the Co-op took the step as an extension of its existing policy which had been not to source produce from illegal settlements that have been built on Palestinian territories in the West bank. Now the retail and insurance giant has taken it one step further by “no longer engaging with any supplier of produce known to be sourcing from the Israeli settlements”. The decision will hit four companies and contracts worth some £350,000. Original Link: