All the countries—including Sweden—that now recognize Palestinian statehood - Quartz. Sweden announced that it will recognize the state of Palestine, becoming the first member of the European Union to do so. 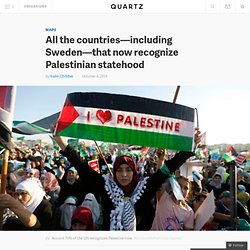 Stefan Lofven became the prime minister of a new center-left government this month and used his inaugural address to parliament to say that a “two-state solution requires mutual recognition and a will to peaceful co-existence. Dozens of Cambridge academics condemn Israel's attack on Gaza. The statement concludes with the academics adding their 'voices to those of the Palestinian resistance in appealing for an immediate lifting of the blockade on Gaza' More than 50 academics at the University of Cambridge have signed a statement condemning Israel's recent attack on Gaza, and urging a lifting of the blockade and "justice for the Palestinian people". 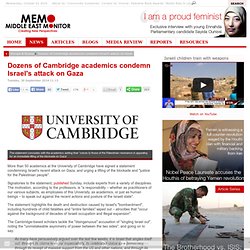 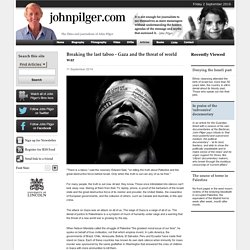 Only when this truth is out can any of us be free. " For many people, the truth is out now. At last, they know. Israeli intelligence veterans' letter to Netanyahu and military chiefs - in full. Prime Minister, Mr Benjamin Netanyahu Chief of General Staff, Benny Gantz Military Intelligence Director, Major General Aviv Kochavi Commander of Unit 8200 We, veterans of Unit 8200, reserve soldiers both past and present, declare that we refuse to take part in actions against Palestinians and refuse to continue serving as tools in deepening the military control over the Occupied Territories. 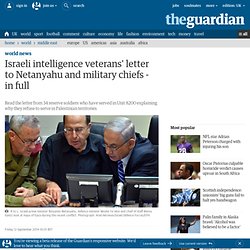 ‘Any Palestinian is exposed to monitoring by the Israeli Big Brother’ ‘Our work has serious impact on the lives of many people’ I enlisted in the Intelligence Corps with a clear understanding that regarding anything that involves the Palestinian arena, I will engage in self-defence. 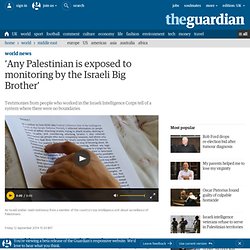 Throughout my service in my unit I did and encountered things that seemed irrelevant from a security standpoint, and I did not have a clear conscience participating in such activities. Contrary to my expectations, our database included not only security-related intelligence but also personal and political information. That is to say, on a personal level, there is no respect for Palestinian privacy. From a political standpoint, information is collected that can serve to manipulate Israeli, Palestinian and international politics.

Noam Chomsky: After 50 days shooting fish in a barrel in Gaza, what will Israel do next? The latest ceasefire will go the same way as other 'agreements' following Israel's periodic escalations of its unremitting assault on Gaza: Hamas will observe it, Israel will ignore it. 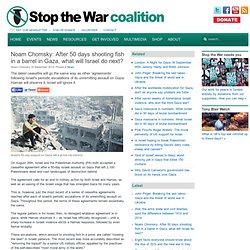 Israel's 50 day assault on Gaza left a ghost city behind. On August 26th, Israel and the Palestinian Authority (PA) both accepted a ceasefire agreement after a 50-day Israeli assault on Gaza that left 2,100 Palestinians dead and vast landscapes of destruction behind. As protest over Gaza grew, so did attacks on speech supporting Palestinian freedom – Mondoweiss. Across the U.S., people are rallying in support of justice for Palestinians. 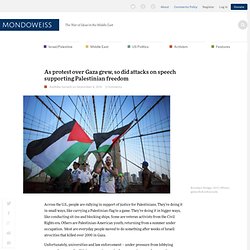 They’re doing it in small ways, like carrying a Palestinian flag to a game. They’re doing it in bigger ways, like conducting sit-ins and blocking ships. Some are veteran activists from the Civil Rights era. Others are Palestinian-American youth, returning from a summer under occupation. Most are everyday people moved to do something after weeks of Israeli atrocities that killed over 2000 in Gaza. Unfortunately, universities and law enforcement – under pressure from lobbying groups, donors and politicians – are increasingly suppressing speech supporting Palestinian freedom. Below is a roundup of summer incidents in which people lost their job, were investigated or otherwise sanctioned because they were critical of Israel’s policies, or merely expressed support for Palestinian rights. Palestine Solidarity Legal Support is tracking such incidents of repression. 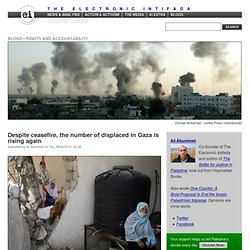 Meanwhile, the scale of the destruction to Gaza’s infrastructure and economy caused by 51 days of Israeli bombing is becoming starker. The death toll stands at 2,168 people, of whom 521 are children, according to Al Mezan Center for Human Rights which carefully verifies deaths. And despite the ceasefire, Palestinians continue to die. Mariam Abu Amra, 23, was the latest to succumb in a Jerusalem hospital today from wounds she sustained during the Israeli attack in Deir al-Balah in Gaza, Ma’an News Agency reported.

People going back to UN shelters UN OCHA said that the number of displaced persons in UN shelters fell dramatically from 289,000 to 53,000 between 26 and 27 August. Jewish letter to U. of Illinois leadership: 'The firing of Professor Salaita is the Israeli attack on Palestine coming to our campus' Dear Chancellor Wise & Members of The Board of Trustees, We, Jewish students, faculty, staff, alumni, and parents of the University of Illinois at Urbana-Champaign, are writing to object in the strongest possible terms to the firing of Professor Steven Salaita. 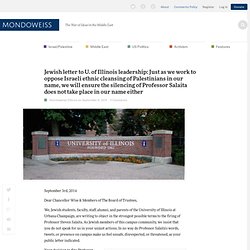 As Jewish members of this campus community, we insist that you do not speak for us in your unjust actions. Fatou Bensouda: the truth about the ICC and Gaza. Has the international criminal court avoided opening an investigation into alleged war crimes in Gaza due to political pressure, as suggested in an article published in the Guardian earlier this week? 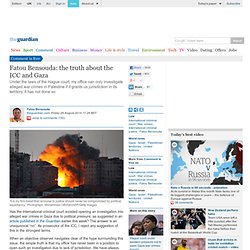 The answer is an unequivocal “no”. As prosecutor of the ICC, I reject any suggestion of this in the strongest terms. When an objective observer navigates clear of the hype surrounding this issue, the simple truth is that my office has never been in a position to open such an investigation due to lack of jurisdiction. The children killed in Gaza during 50 days of conflict. Why Israel’s bombardment of Gaza neighborhood left US officers ‘stunned’ The cease-fire announced Tuesday between Israel and Palestinian factions — if it holds — will end seven weeks of fighting that killed more than 2,200 Gazans and 69 Israelis. But as the rival camps seek to put their spin on the outcome, one assessment of Israel’s Gaza operation that won’t be publicized is the U.S. military’s. Though the Pentagon shies from publicly expressing judgments that might fall afoul of a decidedly pro-Israel Congress, senior U.S. military sources speaking on condition of anonymity offered scathing assessments of Israeli tactics, particularly in the Shujaiya neighborhood of Gaza City.

One of the more curious moments in Israel’s Operation Protective Edge came on July 20, when a live microphone at Fox News caught U.S. Secretary of State John Kerry commenting sarcastically on Israel’s military action. “It’s a hell of a pinpoint operation,” Kerry said. Pink Floyd’s Roger Waters: Why moral perversity of U.S. position in Gaza is stunning. Gauging the July-August 2014 Gaza War. The July-August 2014 Gaza war has not thus far initiated regional and international action to address the root causes of the Israeli-Palestinian conflict, nor to end the inhumane blockade that has been imposed on Gaza. Israel is keen to separate “humanitarian” issues from political ones, and is trying to play on the Hamas/Fatah division and the tense relations between Hamas and the Egyptian government.

This will not help to address the real issues. Hamas and other Palestinian factions will resist measures to disarm them and thus lose the “deterrent” advantage that they have acquired. Why I Oppose Anti-Semitism  The year is 1992, I am 16 years old. It is Pesach, the Jewish feast of Passover; I am in Frinton On Sea, Essex, with the Hirsch family at the evening meal. Wine is drunk, there are incantations and Torah readings, my mate Matt's little sister is beautiful, the sense of family unity and tradition is also beautiful. Me and Matt, now obediently sat in those little hats, kippahs they're called, had dropped some acid earlier in the evening and the whole thing suddenly gets a bit too much.

Is Israel hoping to break Palestinian resistance by killing Gaza's dairy cows, sheep and camels? (1) Facebook. Oakland Activists "Block the Boat" in Solidarity with Gaza. On August 16, 2014 about 2500 protesters from different organizations, communities and experiences in support for Gaza successfully blocked an Israeli owned cargo ship at the Port of Oakland in California. (Photo: Daniel Arauz) In response to the recent war between Israel and Gaza, the Palestine General Federation of Trade Unions has issued a call urging American labor unions "to condemn the Israeli aggression and to boycott Israel through various means. " On the UN and war in Gaza. When Ban Ki-moon called for an "end to the violence" in Gaza last month, his call fell on deaf ears. When he urged an "end to the madness", Israel yawned.

It wasn't until the UN Security Council issued a mild presidential statement urging an "immediate humanitarian ceasefire" that the Israeli government snapped. Even though the statement fell short of Palestinian and Arab demands, Israeli Prime Minister Benjamin Netanyahu called UN chief Ban Ki-moon to protest the statement's partiality towards Hamas. Killed, maimed, traumatized and terrified: what Israel did to the children of Gaza. Children never start wars, yet they are the ones that are killed, maimed, traumatized and left homeless, terrified and permanently scarred.

Soundus, a young girl being treated in hospital for injuries from Israeli shelling of Gaza, August 2014. “My child became blind and lost the ability to speak, his dad died and his three brothers are seriously wounded. Hamas talks of 'real chance' for Gaza agreement with Israel. Hamas believes there is a "real opportunity" to reach an agreement with Israel in Cairo negotiations to end the conflict in Gaza, saying it is "not interested in more bloodshed". The positive signals from the Islamist organisation, which has fought a 30-day war with Israel, came after mediators brokered a five-day extension to the current ceasefire shortly before a midnight deadline on Wednesday.

Names of Palestinians Killed in the War on Gaza since 8 July. “But Hamas…” A Palestinian man sits on the edge of a refugee camp following the Nakba in 1948. Credit: Creative Commons/palestineremembered.com. Why border lines drawn with a ruler in WW1 still rock the Middle East. 13 December 2013Last updated at 19:25 ET. Palestinian resistance carry out three operations against Israeli army in West Bank. 64 Palestinian Kidnapped In Jerusalem, West Bank. Thursday August 14, 2014 12:52. Gaza Strip: Benjamin Netanyahu Asks US Lawmakers to 'Help Israel Avoid War Crimes Charges' Gaza is a crime made in Washington as well as Jerusalem. Global revulsion at the mind-numbing carnage of Israel’s onslaught on Gaza seems finally to have spurred some of the western political class to speak out.

Antiwar Committee Chicago. Israel Unleashes Death Ray on Gaza. (Editor’s note: Press TV censors blocked this report from Iran’s media, another “Banned by Press TV”) Reports, including photographic evidence reveal that Israel is using an energy weapon to attack targets in Gaza. The destructive beam, thought to be a high energy laser, is emitted from a plane identified as a Boeing KC707 “Re’em,” originally configured for Electronic Warfare. Israel Must Stop Its Campaign of Terror. Millennials are over Israel: A new generation, outraged over Gaza, rejects Washington’s reflexive support. Palestinians tear down Apartheid fence. Is this a Palestinian victory as Israel loses the battle to crush Gaza? Cash, Weapons and Surveillance: the U.S. is a Key Party to Every Israeli Attack.

'Disgustingly Biased' - The Corporate Media On The Gaza Massacre. Israel Suspends Attack in Parts of Gaza, but Strike Kills Girl. UNRWA investigating discovery of 20 rockets found in empty Gaza school. Letter from Gaza by a Norwegian doctor. UK government reviewing £8bn of arms sales to Israel. Gaza: Palestine first and last. Brian Eno: In a world of horrors, why I single out the war crimes of Israel. The children of Gaza and the profit being made from their genocide.