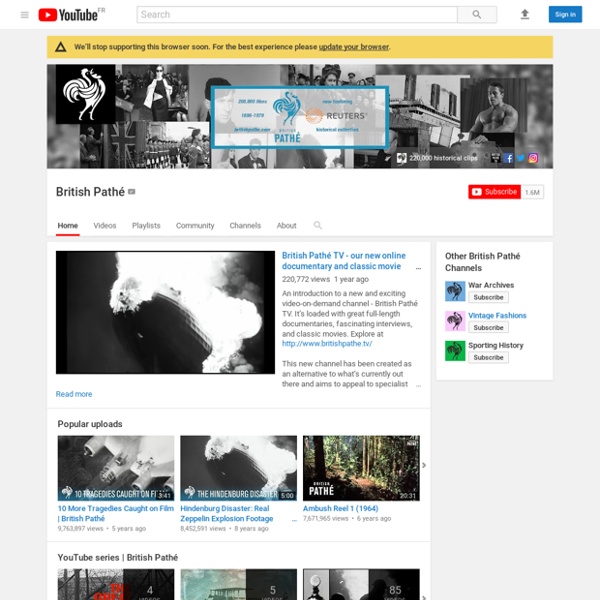 British Pathé TV Trailer 32,900 views 2 months ago An introduction to a new and exciting video-on-demand channel - British Pathé TV. It’s loaded with great full-length documentaries, fascinating interviews, and classic movies. Explore at This new channel has been created as an alternative to what’s currently out there and aims to appeal to specialist audiences, like history buffs, royal watchers, cinema aficionados, and train enthusiasts. British Pathé TV is available to everyone, anywhere in the world via the website. iPhone and iPad users can also download the British Pathé TV app to enable them to explore the channel on-the-go. We hope you enjoy it.

10 Tips for Surviving and Thriving in Your First Year Teaching - Edutopia Dear New Teachers, This blog post is for you. Perhaps you’ve heard that your first year will be “sooo hard.” I want to offer you another possibility. Your first year might just be awesome. World Digital Library Home No other symphonic composition has met with such a broad and complex reception as Ludwig van Beethoven's Symphony Number 9 in D minor, opus 125, popularly known as the Choral Symphony. The work marked an important development in 19th century music. In the finale, Beethoven set to music the German poet Friedrich von Schiller’s An die Freude (Ode to joy), the first time the human voice was included in a symphonic work.

Lives - Lives - London Lives Biographies Compiled using London Lives London Lives contains enough documentary material to reconstruct the lives, or significant portions of the lives, of hundreds of thousands of Londoners who lived in the eighteenth century, including both plebeians and the officers who manned the institutions of government and social welfare. You can access the lives by clicking either on the keywords you are interested in, or on individual names using the alphabetical index below. Lives A-Z Robert Abel, b. 1767

Saudi royal calls for regime change in Riyadh A senior Saudi prince has launched an unprecedented call for change in the country’s leadership, as it faces its biggest challenge in years in the form of war, plummeting oil prices and criticism of its management of Mecca, scene of last week’s hajj tragedy. The prince, one of the grandsons of the state’s founder, Abdulaziz Ibn Saud, has told the Guardian that there is disquiet among the royal family – and among the wider public – at the leadership of King Salman, who acceded the throne in January. The prince, who is not named for security reasons, wrote two letters earlier this month calling for the king to be removed. “The king is not in a stable condition and in reality the son of the king [Mohammed bin Salman] is ruling the kingdom,” the prince said. “So four or possibly five of my uncles will meet soon to discuss the letters.

Red-state politics in and out of the college classroom For two decades, I have taught U.S. women’s and gender history at Southern Illinois University at Carbondale, a blue town in a blue state, marooned in an ocean of red. Bordered by Appalachia, the Mississippi Delta and the Ozarks, Southern Illinois is surrounded by the country’s poorest rural regions. Some of my students arrive from white farming communities and are the first in their families to attend college. They grow up on church, military, patriotism and traditional family, and they come from a world different from mine. I grew up in 1970s San Francisco, and my parents were leftists.

Historic Maps Welcome to ETC's collection of historic maps. Here you will find over 5,000 maps representing many different time periods. A friendly license allows teachers and students to use up to 25 maps in non-commercial school projects without further permission. Public health and epidemics in the 19th and 20th centuries 2. Essential information You can search our catalogue for relevant records using keywords and dates. However, because the catalogue descriptions of these records are not very detailed it can be difficult to identify the right keywords to find the documents you want. Map of London Social and Functional Analysis 1943 [Updated] This map of London districts, was intended to be used as a grand “masterplan” of how a post-WW2 London could look. Each district appears as a simplified “blob” with rounded edges – many districts are simple ovals. Specific single “University”, “Government”, “Press” and “Law” districts are all defined. Blue dots mark out the main shopping streets, with town halls marked with larger red dots. The accompanying text reads: A simplification of the communities & open space survey showing the existing main elements of London.

Saudi Arabia’s new King Salman moves quickly to settle future succession King Salman of Saudi Arabia signalled continuity at a time of turmoil in the Middle East on Friday – but paved the way for a new generation of royals to take power as his predecessor Abdullah was buried and his subjects swore their allegiance. Salman, who is 79 and widely said to be in poor health, became king, as long expected, on the death of his half-brother, aged 90, in the early hours of the morning. The new crown prince and heir to the throne is Prince Muqrin, 69. In a carefully-choreographed transition, Saudi media emphasised the king’s grandiose title of Guardian of the Two Holy Shrines – a reference to Mecca and Medina – to underscore his Muslim credentials as a key element of Saudi legitimacy.

Here's a great way to get to know your students As teachers, our goal is to help our students. Sometimes they work independently; sometimes they work in groups. Each student has a different learning style, personality, and culture. Learn 48 Languages Online for Free How to learn languages for free? This collection features lessons in 48 languages, including Spanish, French, English, Mandarin, Italian, Russian and more. Download audio lessons to your computer or mp3 player and you’re good to go. Amharic