Next-Gen Solar Panels: More Power from the Sun. Vivaldi Conservatories. This fully transparent solar cell could make every window and screen a power source (updated) Back in August 2014, researchers at Michigan State University created a fully transparent solar concentrator, which could turn any window or sheet of glass (like your smartphone’s screen) into a photovoltaic solar cell. 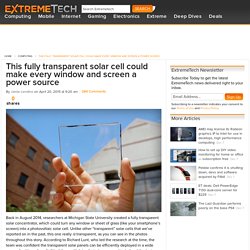 Unlike other “transparent” solar cells that we’ve reported on in the past, this one really is transparent, as you can see in the photos throughout this story. According to Richard Lunt, who led the research at the time, the team was confident the transparent solar panels can be efficiently deployed in a wide range of settings, from “tall buildings with lots of windows or any kind of mobile device that demands high aesthetic quality like a phone or e-reader.” Now Ubiquitous Energy, an MIT startup we first reported on in 2013, is getting closer to bringing its transparent solar panels to market. Lunt cofounded the company and remains assistant professor of chemical engineering and materials science at Michigan State University. Onyx Solar - Integración Fotovoltaica En Edificios (BIPV) - Materiales De Construcción Fotovoltaicos - Vidrio Fotovoltaico Para Edificación. 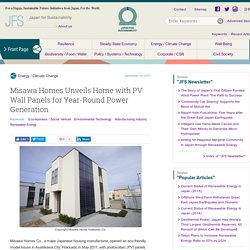 Misawa Homes Co., a major Japanese housing manufacturer, opened an eco-friendly model house in Asahikawa City, Hokkaido in May 2011, with photovoltaic (PV) panels installed on the exterior walls, aiming to consistently generate electricity throughout the year. In this region, where temperatures fluctuate over 50 degrees Celsius over the course of the year and high levels of snow accumulate in the winter, most households require heating more than half the year. Because heavy accumulations of snow make it almost impossible for rooftop PV panels to generate any electricity, Misawa Homes designed a house with PV panels on the side in November 2010, and completed the prototype in May 2011. As there has been a growing interest in renewable energy, this model house is attracting much attention from people who realized that enabling power generation at home will be also helpful in saving energy. SolarSeal PV Wall Systems. Solar PV - Solar PV Facades - Rainscreen Cladding. Conventional Solar PV Panels can be fixed to the external walls of buildings with brick or block exteriors, using one of the aluminium or stainless steel bracketing systems that are readily available. 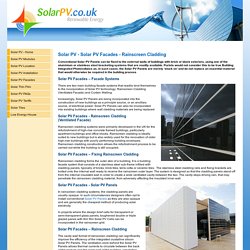 Purists would not consider this to be true Building Integrated Photovoltaics as, in such cases, the Solar PV Panels are merely ‘stuck on’ and do not replace an essential material that would otherwise be required in the building process. Energy Producing Curtain Wall System, 1600 PowerWall™ BIPV. Solar systems for walls - Ruukki. All buildings manifest the values of their users - Make your sustainable values proudly visible by utilising clean renewable energy with Ruukki® on-wall solar or Liberta™ Solar. 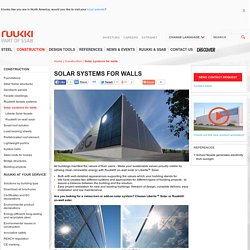 Both with well-detailed appearances supporting the values which your building stands for. We have created two different systems and approaches for different types of building projects - to assure a balance between the building and the solution. Easy project realisation for new and existing buildings: freedom of design, complete delivery, easy installation and low maintenance. PV/Thermal (photovoltaic + thermal) - SolarWall solar air heating technology merged with PV electricity generation, for a solar heater PV co-generation system with increased efficiency over typical PV - SolarWall PV/T and SolarDuct PV/T systems. You are here: Products > PV/Thermal SolarWall® PV/T provides up to 300% more energy (in the form of solar electricity + solar heat) than a conventional solar PV system. 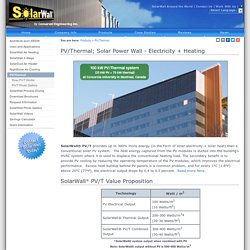 The heat energy captured from the PV modules is ducted into the building’s HVAC system where it is used to displace the conventional heating load. The secondary benefit is to provide PV cooling by reducing the operating temperature of the PV modules, which improves the electrical performance. Excess heat buildup behind PV panels is a common problem, and for every 1°C (1.8°F) above 25°C (77°F), the electrical output drops by 0.4 to 0.5 percent. 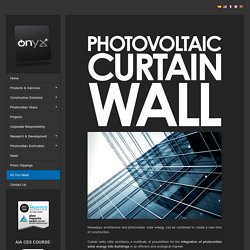 Curtain walls offer architects a multitude of possibilities for the integration of photovoltaic solar energy into buildings in an efficient and ecological manner. Photovoltaic curtain wall provides a multifunctional solution where not only clean and free energy is being generated in-situ, but also natural illumination is being provided implementing solar control by filtering effect, avoiding infrared and UV irradiation to the interior (enhancing thermal comfort and avoiding interior aging).

The large variety in form, structure and colour of transparent photovoltaic glass, combined with the aluminum frames, provides a free reign of creativity for architects so they can create designs which unite elegance, efficiency and energy saving. Onyx Solar can customize the photovoltaic glass to supply it in different sizes, colours and degrees of transparency. Misawa Homes Unveils Home with PV Wall Panels for Year-Round Power Generation. Which One Of These Student-Designed Solar Houses Will Be The Home Of The Future?

The Solar Decathlon—the Department of Energy's biennial solar house building competition—starts up again this October, and it looks like the homes on display will be as creative as ever. 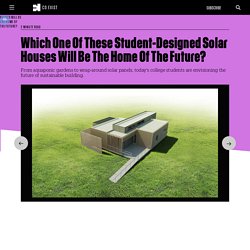 All designed by students and all energy self-sufficient, the homes give a glimpse of what could become mainstream in home-building in the next few years. Richard King, who launched the first Solar Decathlon back in 2002, says there have been a lot of changes since the early days. The houses back then tended to be functional; they tended to incorporate solar panels as an afterthought to the design; and they didn't have the fancy technology we have now, including smart home control systems and intelligent windows. "Now it's all about how you design beauty and architecture into these houses.

Then, they were just sticking solar panels up on roofs in any direction you can imagine," he says. This year, the houses must also be able to charge up an electric vehicle, so it can be driven at least 25 miles a day.