Thank the fates that i am an athiest!! 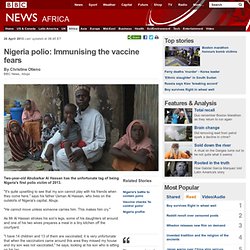 "It's quite upsetting to see that my son cannot play with his friends when they come here," says his father Usman Al Hassan, who lives on the outskirts of Nigeria's capital, Abuja. "He cannot move unless someone carries him. This makes him cry. " As Mr Al Hassan strokes his son's legs, some of his daughters sit around and one of his two wives prepares a meal in a tiny kitchen off the courtyard. Continue reading the main story “Start Quote There are a lot of nomadic populations on the move… there is no fixed address where you can knock on their door during the campaign” End QuoteMelissa CorkumUnicef In the long winding alleys of this community, houses are packed close together. Open gutters like streams run like central veins carrying household waste water from homes. Journalists arrested Continue reading the main story. Christian Minister: Many American Christian Leaders Are Authoritarian Bullies. April 14, 2013 | Like this article? 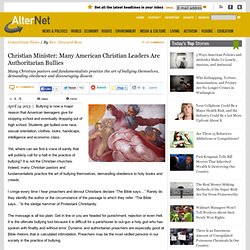 Join our email list: Stay up to date with the latest headlines via email. Bullying is now a major reason that American teenagers give for skipping school and eventually dropping out of high school. Students get bullied over race, sexual orientation, clothes, looks, handicaps, intelligence and economic class. Yet, where can we find a voice of sanity that will publicly call for a halt in the practice of bullying? I cringe every time I hear preachers and devout Christians declare “The Bible says…” Rarely do they identify the author or the circumstance of the passage to which they refer. The message is all too plain: Get in line or you are headed for punishment, rejection or even Hell.

And then there are the creeds, which were originally devised to force conformity to Christian belief. Bullying also is practiced at the highest level of American civil society, with bullying a front-line tool of U.S. foreign policy. Religious Trauma Syndrome: How Some Organized Religion Leads to Mental Health Problems. March 25, 2013 | Like this article? 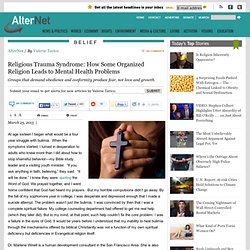 Join our email list: Stay up to date with the latest headlines via email. At age sixteen I began what would be a four year struggle with bulimia. When the symptoms started, I turned in desperation to adults who knew more than I did about how to stop shameful behavior—my Bible study leader and a visiting youth minister. Dr. Two years ago, Winell made waves by formally labeling what she calls “Religious Trauma Syndrome” (RTS) and beginning to write and speak on the subject for professional audiences. Is toxic religion simply misinterpretation? Let’s start this interview with the basics. Winell: Religious trauma syndrome (RTS) is a set of symptoms and characteristics that tend to go together and which are related to harmful experiences with religion. But in reality, religious teachings and practices sometimes cause serious mental health damage. “Pedophilia Ring” in Evangelical Church? Ministry Accused of Ignoring Sexual Abuse. March 12, 2013 | Like this article? 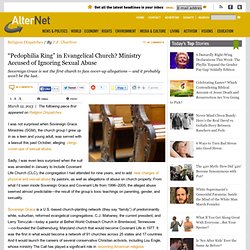 Join our email list: Stay up to date with the latest headlines via email. The following piece first appeared on Religion Dispatches. I was not surprised when Sovereign Grace Ministries (SGM), the church group I grew up in as a teen and young adult, was served with a lawsuit this past October, alleging clergy cover-ups of sexual abuse. Sadly, I was even less surprised when the suit was amended in January to include Covenant Life Church (CLC), the congregation I had attended for nine years, and to add new charges of physical and sexual abuse by pastors, as well as allegations of abuse on church property. Sovereign Grace is a U.S. Five years after its founding, in 1982, the church launched what would become its overarching ministry, Sovereign Grace, originally called “People of Destiny International.”

Alongside these powerful partnerships has come strife. Pope Francis and Argentina's 'disappeared' 10 April 2013Last updated at 19:02 ET By Mark Dowd BBC News The election of Pope Francis has thrown a spotlight on his conduct as a priest under Argentina's military dictatorship in the late 70s and early 80s, and in particular at what point he found out about one of the country's most shameful episodes. 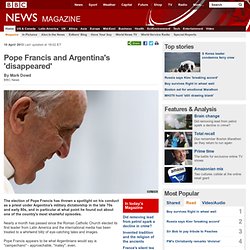 Nearly a month has passed since the Roman Catholic Church elected its first leader from Latin America and the international media has been treated to a whirlwind blitz of eye-catching tales and images. Pope Francis appears to be what Argentinians would say is "campechano" - approachable, "matey", even. He has washed and kissed the feet of women and Muslims, inscribed his autograph on plaster casts of injured pilgrims and has even telephoned his old Buenos Aires news vendor to cancel his newspaper order. And perhaps most eye-catchingly of all, he has said he wants to see as a priority "a poor Church for the poor".