Solar articles to save 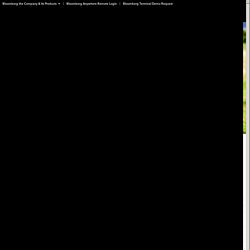 It appeared first on the Bloomberg Terminal. Solar trade tariff battle heats up, fate may rest with Trump A U.S. International Trade Commission decision in a dispute filed by U.S. solar panel makers Suniva and SolarWorld — expected Sept. 22 — may chill domestic solar demand and ripple through the global supply chain. 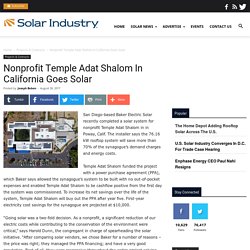 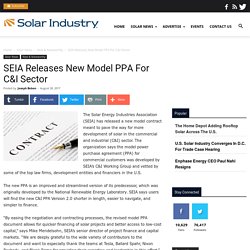 The organization says the model power purchase agreement (PPA) for commercial customers was developed by SEIA’s C&I Working Group and vetted by some of the top law firms, development entities and financiers in the U.S. The new PPA is an improved and streamlined version of its predecessor, which was originally developed by the National Renewable Energy Laboratory. U.S. Auto Dealerships Cruise Toward Savings With Solar - Solar Industry. Like many other businesses, auto dealerships across the U.S. are increasingly adopting solar, and SunPower recently highlighted how its network of solar dealers has helped auto companies make the transition. 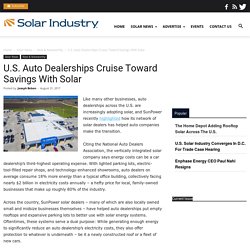 Source Solar energy is a major renewable energy source with the potential to meet many of the challenges facing the world. 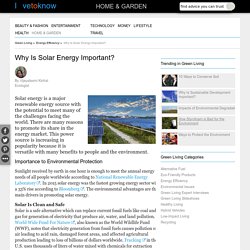 There are many reasons to promote its share in the energy market. This power source is increasing in popularity because it is versatile with many benefits to people and the environment. Importance to Environmental Protection Sunlight received by earth in one hour is enough to meet the annual energy needs of all people worldwide according to National Renewable Energy Laboratory. Green Generation: Millennials Say Sustainability Is a Shopping Priority. Despite the fact that Millennials are coming of age in one of the most difficult economic climates in the past 100 years, a recent Nielsen global online study found that they continue to be most willing to pay extra for sustainable offerings—almost three-out-of-four respondents in the latest findings, up from approximately half in 2014. 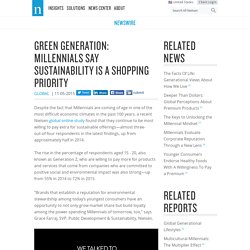 The rise in the percentage of respondents aged 15 - 20, also known as Generation Z, who are willing to pay more for products and services that come from companies who are committed to positive social and environmental impact was also strong—up from 55% in 2014 to 72% in 2015. “Brands that establish a reputation for environmental stewardship among today’s youngest consumers have an opportunity to not only grow market share but build loyalty among the power-spending Millennials of tomorrow, too,” says Grace Farraj, SVP, Public Development & Sustainability, Nielsen. Other findings from the report include: About the Nielsen Global Survey. Hydrologic Rooftop Solar - Commercial Solar Contractor. The Hydrologic Distribution Company is a lighting and plumbing supply company Owned and operated in Tarpon Spring, Florida. 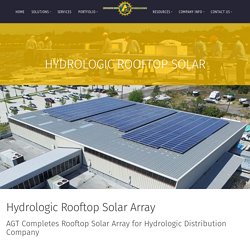 The company provides lighting and plumbing supplies and is a trusted partner for numerous small businesses and entrepreneurs throughout Central Florida. Originally a small enterprise working from a single facility, Hydrologic has quickly grown into multiple locations, allowing them to provide fast, specialized service to each of their valued customers. Advanced Green Technologies (AGT) was chosen to integrate a solar array into Hydrologic’s existing 40-foot, 12,000 square-feet Structural Standing Seam Roof system that would not only provide clean energy to the distribution facility, it would also need to withstand the unpredictability of Florida’s hurricane season and not void the existing roofing systems manufacturer warranty. Why is Commercial Solar a Good Investment?<br /> Solar Investment Returns and the 5 Key Factors<br />

How the Trump Administration Could Pre-Empt State Policies to Shore Up Baseload Power. Sources said that such a move from the Trump administration would be hypocritical and almost unthinkable. 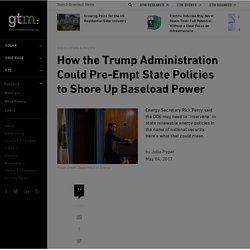 “But who knows!” Said one clean energy stakeholder, who asked not to be named because the details are still murky. “There is a huge amount of erratic policymaking going on. This is not a normal administration. [...] This is not how it’s done. Green Generation: Millennials Say Sustainability Is a Shopping Priority. How much electricity is lost in transmission? « Carbon Counter. How much electricity is lost in transmission? 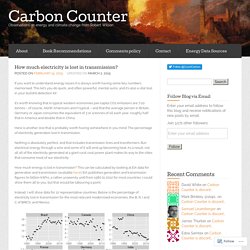 Posted on Updated on If you want to understand energy issues it is always worth having some key numbers memorised. This let’s you do quick, and often powerful, mental sums, and it’s also a vital tool in your bullshit detection kit*. It’s worth knowing that in typical western economies per-capita CO2 emissions are 7-10 tonnes – of course, North Americans aren’t typical – and that the average person in Britain, Germany or Japan consumes the equivalent of 3 or 4 tonnes of oil each year, roughly half that in America and double that in China. Here is another one that is probably worth having somewhere in you mind: The percentage of electricity generation lost in transmission. Nothing is absolutely perfect, and that includes transmission lines and transformers. The Electric Power System is Inefficient. Today’s electric power system is shockingly inefficient in terms of both resource use and the market economy. 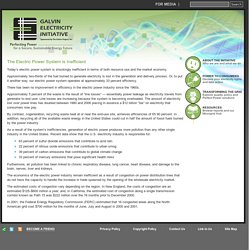 Approximately two-thirds of the fuel burned to generate electricity is lost in the generation and delivery process. Or, to put it another way, our electric power system operates at approximately 33 percent efficiency. There has been no improvement in efficiency in the electric power industry since the 1960s. Approximately 5 percent of the waste is the result of “line losses” — essentially power leakage as electricity travels from generator to end user. Line losses are increasing because the system is becoming overloaded. By contrast, cogeneration, recycling waste heat at or near the end-use site, achieves efficiencies of 65 90 percent.

As a result of the system’s inefficiencies, generation of electric power produces more pollution than any other single industry in the United States. The estimated costs of congestion vary depending on the region. Best States For Solar ROI. As many people have pointed out, solar panels aren’t like household appliances, they are more like financial investments. So, the key point many people want to know is, what’s my solar ROI (return on investment). The report summarized below shows the average solar ROI for states across the US, which is pretty cool and interesting. But to get even more specific, you can simply get a solar quote right now that projects you cost of going solar, solar electricity savings, and solar ROI. Check that out, and get in touch with our team to get an even more narrowed down, personalized quote. Now that you’ve done that, check out the state solar ROI rankings below, preceded by some expert commentary from yours truly.

Advantages and disadvantages of a solar tracker system. A version of the article first appeared in a blog by mounting provider Solar FlexRack. Read the company’s blog here. The Solar FlexRack Series TDL solar tracking system. Solar trackers are rising in popularity, but not everyone understands the complete benefits and potential drawbacks of the system. Solar panel tracking solutions are a more advanced technology for mounting photovoltaic panels. Stationary mounts, which hold panels in a fixed position, can have their productivity compromised when the sun passes to a less-than-optimal angle. Comparing the ROI of a Solar Tracker vs. Fixed Mount Solar. As a solar installer, you want to find a solar solution that performs well, lasts for a long time and, perhaps most importantly, produces a strong return on investment for your clients (and, in turn, your business).

To help you make your decision, we've taken a deep dive to compare the ROI of fixed-mount and solar tracker systems. When it comes to cost, the difference between fixed solar (whether it be roof- or ground-mount) and solar tracker systems generally comes down to whether you want to spend less money up front, or save considerably more over the life system. Benefits of fixed PV Systems Fixed-mount systems typically cost less initially, when using the traditional measure of dollar per watt. However, customers won't be making as much return on these systems over time, as they tend to produce less energy than tracking systems.

Appraising into the Sun: Six-State Solar Home Paired-Sales Analysis. Lost In Transmission: How Much Electricity Disappears Between A Power Plant And Your Plug? How much energy is lost along the way as electricity travels from a power plant to the plug in your home? This question comes from Jim Barlow, a Wyoming architect, through our IE Questions project. To find the answer, we need to break it out step by step: first turning raw materials into electricity, next moving that electricity to your neighborhood, and finally sending that electricity through the walls of your home to your outlet. Step 1: Making Electricity Power plants – coal, natural gas, petroleum or nuclear – work on the same general principle. Energy-dense stuff is burned to release heat, which boils water into steam, which spins a turbine, which generates electricity. 3 Cool Ways to Finance Community Solar Projects. Thanks to Co-op, Small Iowa Town Goes Big On Solar.

It’s hard to imagine a place more bucolic than the rural farming communities clustered around Kalona, Iowa — the kind of place that for generations has embodied conservative, blue-collar values woven throughout rural America. Nestled in the gently rolling hills of southeastern Iowa, it’s at first difficult to tell what sets Kalona apart from countless similar places on the Midwestern landscape. Small towns like these form the backbone of a region whose economy depends on a rich farming tradition, even well into the 21st century. But Kalona’s charm doesn’t obscure the innovation that makes it a national leader in clean power generation.

Growth in residential electricity prices highest in 6 years, but expected to slow in 2015. Consumer Reviews of Solar Companies and Solar Panels. Yingli Solar. Why Use Solar Electricity? The Solutions Project - 100% Renewable Energy.