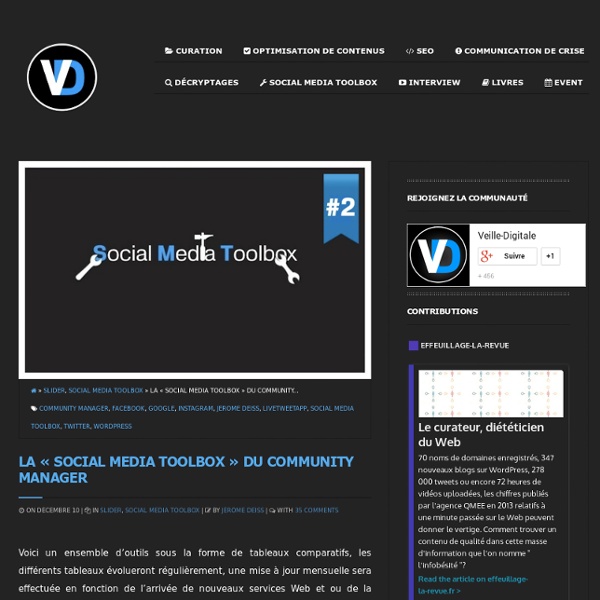 7 Branding Mistakes To AvoidKillerStartups by Raoul Davis Don’t let a weak brand leave you dead on arrival. While many people focus on building a successful brand, it is just as important to understand how to avoid killing your brand to begin with. Spending thousands or millions of dollars and countless hours on a brand that is ineffective is an exercise in frustration too many CEOs unwittingly engage in. A colleague of mine, Chris Collins of branddesigner.com, distinguishes between getting branded and getting labeled. Getting labeled means you’ve lost control; people are defining your brand behind your back in ways that would make you cringe, and your potential for maximizing profits is being flushed down the toilet. Video Killed the Text Star? Social Video Drives More Engagement on Facebook than Text Social media may be a relatively new concept for most brands and digital marketers, but the its way of working is already changing. It is a constantly evolving world where one needs to be completely tuned in to be abreast of the situation. People’s tastes shape what we see on social media platforms. In the early days, we were all happy with textual content and posts on social media platforms. However, this quickly changed and people wanted more appealing content like photos.

How to Use Social Media to Market Your Small Business Do you have a hard time justifying your time spent on social media to your boss or your clients? If so -- it might be because you're not selling the full range social media benefits for their small business or startup. When you show people exactly how they can use social media to get ahead of their competition -- they suddenly start paying attention. We all know that social media is great for building awareness and engagement with current and potential customers.

Social Media Image Size Guide from AttwoodDigital.com Posted by Steve on Tuesday, 12th February, 2013 (Members, Social Media Marketing) There’s no doubt that social media sites play an important role in people’s everyday lives. In December 2012, Facebook had 1.06 billion active monthly users and Twitter had 200 million active monthly users. The Best Time to Post on Instagram, Facebook, Twitter, LinkedIn, Pinterest, and Google+ [Infographic] Social media is one of the best ways to amplify your brand and the great content you’re creating. But it isn’t enough to just post content to social whenever you feel like it. Some times are better than others.

19 Visual Social Media Secrets from the Pros [SlideShare] Is your brand telling visual stories? Are you empowering your fans to create and share visual content for you? Brands who create and curate visual content are seeing wider reach, more shares and traffic to their real or virtual doorstep. We asked 19 Visual Social Media Experts for the secrets behind their success online using visual content… Visual Social Media is hot right now. Pinterest makes it easier for mobile users to find what they’re looking for Pinterest on iPhone 5s Pinterest is booming. The social network, which lets users collect images from across the web, has more than 30 billion “pins,” roughly half of which were added in the past six months.

6 Social Media Templates to Save You Hours of Work Social media is a relatively new tool for most businesses. This means that, unlike many other marketing tools, when people begin to build out social media for their business, they’re starting from scratch. They haven’t created social media strategies before or they don’t know what questions to ask for a social media audit, and finding out can be both difficult and time consuming. That’s where we come in.

The Year of the Social SMB [Infographic] What are the social media plans of small to midsize businesses (SMBs) this year? "More than half of SMBs have increased spend on social media compared to the prior year, higher than that of any other marketing channel, including email marketing and events," according to a recent LinkedIn survey. Some 94% of survey respondents said they use social media for marketing. blog.hootsuite According to Search Engine Journal, over 93% marketers use social media to promote their businesses, with Facebook, Twitter and Google+ being their top social networks of choice. While 74% claim to have gained new customers from Facebook, about one third of them used Twitter to successfully gain new leads. However, with this rush to stay on top of social media and the 24x7x365 constantly connected culture that it has given birth to, we are putting undue pressure on the people that make this social media magic happen: the social media manager

How Klout Can Guide Your Online Marketing Strategy A law industry business development consultant I know says it takes on average 17 "touches" with a prospect before turning him or her into a client. Whether that's the number or not, the point is clear: It takes sustained engagement to bring in business. So, whether you're a consultant, a lawyer, an accountant, or any other kind of professional, why would people engage with you? The answer is simple: They trust you. And if you have some influence within your industry, your field of expertise, or your geographic region, they will be all the more likely to trust you. Associate Project Officer (Social Media & Web), Global Education Monitoring Report Job Description Title: Associate Project Officer (Social Media & Web), Global Education Monitoring ReportDomain: CommunicationGrade: P2Organizational Unit: ED/GMRPrimary Location: ParisType of contract: Project AppointmentDuration: 1 year with possibility of extension subject to availability of funds and performance.Annual salary: Dependent rate: approx. 72,907 USDSingle rate: approx. 68,384 USDDeadline (midnight, Paris time): 1 September 2015Application to be sent to: gmrpost@unesco.org Since 2002, the Education for All Global Monitoring Report (GMR) has been an authoritative, analytical, evidence-based report monitoring progress towards the Education for All (EFA) goals, and education-related Millennium Development Goals. Developed by an independent team and published annually by UNESCO, the GMR assessed the extent to which countries met their commitments to international education targets, and proposed policies and strategies to accelerate progress.