9th International Conference on Technology, Knowledge and Society. Velothon - Levinux. Village Bicycle Project. Recycling Bicycles: Donating Used Bikes and Parts, Finding Pre-owed Bikes  & International Bicycle Recycling Programs. Contents: Individuals with Surplus Bicycles to Donate: If you are an individual with a bicycle or two, or bicycle parts and accessories to donate for repair, reuse and recycling, it is usually most practical and cost effective to donate them to a local program. 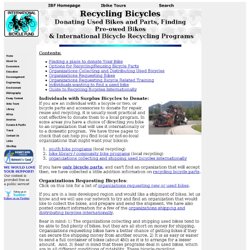 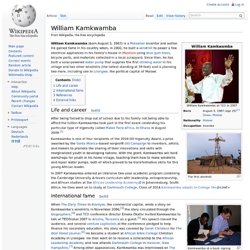 He gained fame in his country when, in 2002, he built a windmill to power a few electrical appliances in his family's house in Masitala using blue gum trees , bicycle parts, and materials collected in a local scrapyard. Since then, he has built a solar-powered water pump that supplies the first drinking water in his village and two other windmills (the tallest standing at 39 feet) and is planning two more, including one in Lilongwe , the political capital of Malawi. Life and career [ edit ] After being forced to drop out of school due to his family not being able to afford the tuition Kamkwamba took part in the first event celebrating his particular type of ingenuity called Maker Faire Africa , in Ghana in August 2009. [ 2 ] International fame [ edit ] Kamkwamba at a book signing References [ edit ] External links [ edit ] 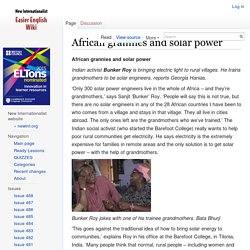 He trains grandmothers to be solar engineers, reports Georgia Hanias. ‘Only 300 solar power engineers live in the whole of Africa – and they’re grandmothers,’ says Sanjit ‘Bunker’ Roy. ‘People will say this is not true, but there are no solar engineers in any of the 28 African countries I have been to who comes from a village and stays in that village. They all live in cities abroad. Bunker Roy jokes with one of his trainee grandmothers.

‘This goes against the traditional idea of how to bring solar energy to communities,’ explains Roy in his office at the Barefoot College, in Tilonia, India. Kenyan Women Light Up Villages with Solar Power. Let there be light. 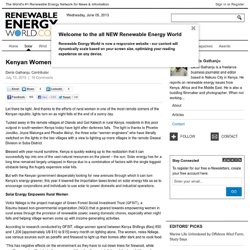 And thanks to the efforts of rural women in one of the most remote corners of the Kenyan republic, lights turn on as night falls at the end of a sunny day. Tucked away in the remote villages of Olando and Got Kaliech in rural Kenya, residents in this poor outpost in south-western Kenya today have light after darkness falls. The light is thanks to Phoebe Jondiko, Joyce Matunga and Phoebe Akinyi, the three solar “women engineers” who have literally switched on the lights in the two villages with a view to lighting up more villages in the remote Gwassi Division in Suba District.

Blessed with year-round sunshine, Kenya is quickly waking up to the realization that it can successfully tap into one of the vast natural resources on the planet – the sun. The women of India's Barefoot College bring light to remote villages. Securing the end of her bright yellow and orange sari firmly around her head, Santosh Devi climbs up to the rooftop of her house to clean her solar panels. 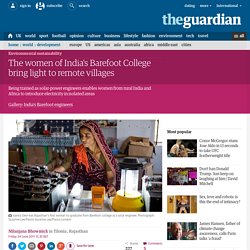 The shining, mirrored panels, which she installed herself last year, are a striking sight against the simple one-storey homes of her village. No less remarkable is that this 19-year-old, semi-literate woman from the backwaters of Rajasthan has broken through India's rigid caste system to become the country's first Dalit solar engineer.

While differences of caste have begun to blur in the cities, in rural India Dalits – also known as "untouchables" – are still impoverished and widely discriminated against. Growing up, Santosh had to avoid the upper caste people of her village or cover her face in their presence. Nowadays, they seek her help. Santosh trained to be a solar engineer at the Barefoot College in Tilonia, 100km from Jaipur. Versatile engines power up rural African villages. In rural villages in East and West Africa, electrical connections are humming and light bulbs are shining for the first time in homes that only knew candlelight before. 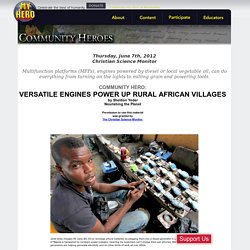 Although no power lines yet reach these villages, multifunction platforms (MFPs) are filling the energy void, powering not just lights but machines that lessen the drudgery of farmers' work. What is a multifunction platform? Though the name sounds a bit daunting, the MFP is basically a stationary diesel engine that can be attached to about anything that rotates: grain-milling and husking machines, water pumps, and power tools. The MFPs are quiet, 6 to 8 horsepower, 750-lb Listeroid engines. Their basic construction and features have not changed significantly since their debut in the 1930s.