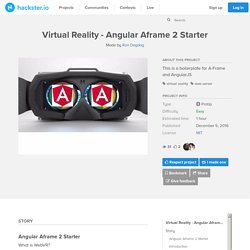 WebVR is an experimental JavaScript API that provides access to Virtual Reality devices, such as the Oculus Rift, HTC Vive, Samsung Gear VR, or Google Cardboard, in your browser. Checkout webvr.info. A-Frame – Make WebVR. Using A Zoom H4n As An On-Camera DSLR Mic. The microphones built into portable digital recorders typically sound pretty good, and if you use a recorder to capture the sound for a DSLR video shoot, you may be tempted to mount the recorder directly on top of your camera and use it as an on-camera mic. 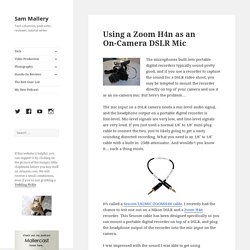 But here’s the problem… The mic input on a DSLR camera needs a mic-level audio signal, and the headphone output on a portable digital recorder is line-level. Mic-level signals are very low, and line-level signals are very loud. If you just used a normal 1/8″ to 1/8″ mini-plug cable to connect the two, you’re likely going to get a nasty sounding distorted recording. Prise en charge des processus VR. Capture 360° living photos with PanoMoments by Dustin Kerstein. Risks and challenges We know PanoMoments aren’t going to be for everyone. 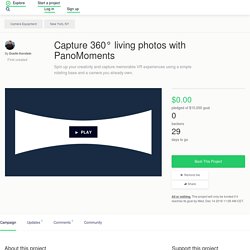 There are times when existing 360 capture methods are the better choice. PanoMoments are just a new option in your creative arsenal, and it’s for that reason we are doing this Kickstarter. We truly just want to see what other people will create, and we’re almost there. The remaining platform development work is already spec'd / designed and is actually quite straightforward. Our biggest challenge is spreading awareness. Untitled. Upload 360 degree videos - YouTube Help. How to make any photo work as a 360 photosphere on Facebook. Facebook recently rolled out the ability for anyone to upload a 360 panorama or photosphere that can be clicked through on desktop, viewed with certain VR headsets, or viewed by moving your device around on mobile. 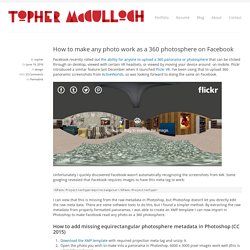 Flickr introduced a similar feature last December when it launched Flickr VR. I’ve been using that to upload 360 panoramic screenshots from ActiveWorlds, so was looking forward to doing the same on Facebook. Unfortunately I quickly discovered Facebook wasn’t automatically recognizing the screenshots from AW. Some googling revealed that Facebook requires images to have this meta tag to work: <GPano:ProjectionType>equirectangular</GPano:ProjectionType> I can view that this is missing from the raw metadata in Photoshop, but Photoshop doesn’t let you directly edit the raw meta data. Congrats! As a sidenote, if you’re interested in capturing 360 photos in the real world, new versions of the Android camera app have the feature built in. Convert Panorama. EleVRant: 360 Stereo Consumer Cameras? There’s a bunch of mono spherical cameras coming to the consumer market soon, with automated stitching and easy workflow. 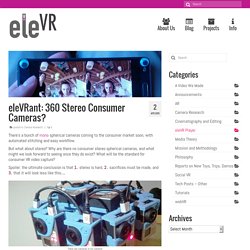 But what about stereo? Why are there no consumer stereo spherical cameras, and what might we look forward to seeing once they do exist? What will be the standard for consumer VR video capture? Spoiler: the ultimate conclusion is that 1. stereo is hard, 2. sacrifices must be made, and 3. that it will look less like this… …and more like this: Adobe Premiere Pro CC tutorials. VR video editing goes meta with Adobe’s Project Clover. VR content creation is going meta, my friends. 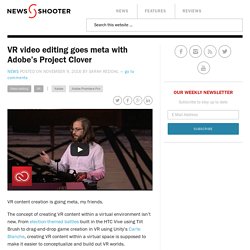 The concept of creating VR content within a virtual environment isn’t new. From election-themed battles built in the HTC Vive using Tilt Brush to drag-and-drop game creation in VR using Unity’s Carte Blanche, creating VR content within a virtual space is supposed to make it easier to conceptualize and build out VR worlds. Collection of 360° Video Rigs. 360° video is growing by leaps and bounds. 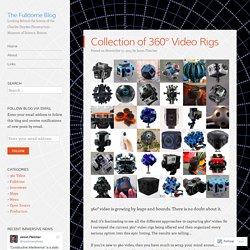 There is no doubt about it. And it’s fascinating to see all the different approaches to capturing 360° video. So I surveyed the current 360° video rigs being offered and then organized every serious option into this epic listing. The results are telling… If you’re new to 360 video, then you have much to wrap your mind around. Collection of 360° Video Rigs. Collection of 360° Video Rigs. Converting a fisheye image to panoramic, spherical and perspective projection. Irista. Orangkucing Lab. 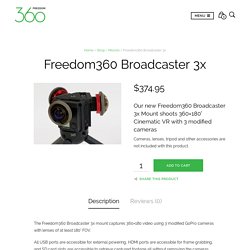 All USB ports are accessible for external powering, HDMI ports are accessible for frame grabbing, and SD card slots are accessible to retrieve captured footage all without removing the cameras. 3/8″ -16 threading is found both on the top and bottom increasing versatility. Included in the package: Freedom360 Broadcaster 3x Mount3x Standard Brackets3x Special Brackets for cameras modified with a backbone ribcage onlyProtective pouch with rain cover (made by ThinkTank) Suggested accessories: Carbon-Fiber monopod (15-20mm tube diameter on the (thin) camera end, light stand, microphone stand, boom pole or similar rigging.Mini tabletop tripod (acts as a stand for the carbon-fiber pole)Super clamp (suspend the carbon-fiber monopod from the ceiling)Counter weights (1.5-2.5kg), depending on your shooting requirements. 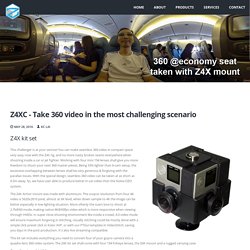 You can make seamless 360 video in compact space very easy now with the Z4X rig, and no more nasty broken seams everywhere when shooting inside a car or jet fighter. Working with four mini 194 lenses shall give you more freedom to shoot your next 360 master pieces. Stitch360: How to Stitch Background & Foreground in AVP (Pt1) How to fix stitching problem after add Effects VR 360 video without additional plugins part2. Tracking 360º Equirectangular Clips in PFTrack. Making360. Panotour - Avancé - Livepano en vidéo 360 — Autopano. Intro. 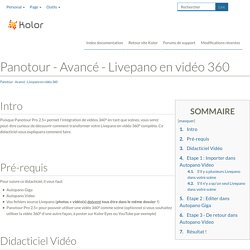 Specifically, it looks at the Make and Model. If the Make and Model correspond to a known 360-degree camera, it will present it as a 360-degree image.Some editing programs can strip the metadata. Facebook recommends the exiftool program to reinsert the correct metadata, which allows batch processing (editing a group of files instead of having to edit each file individually).If you stitched the image yourself or used an unrecognized camera, you can still get the photo recognized as a 360-degree image by using the exiftool.