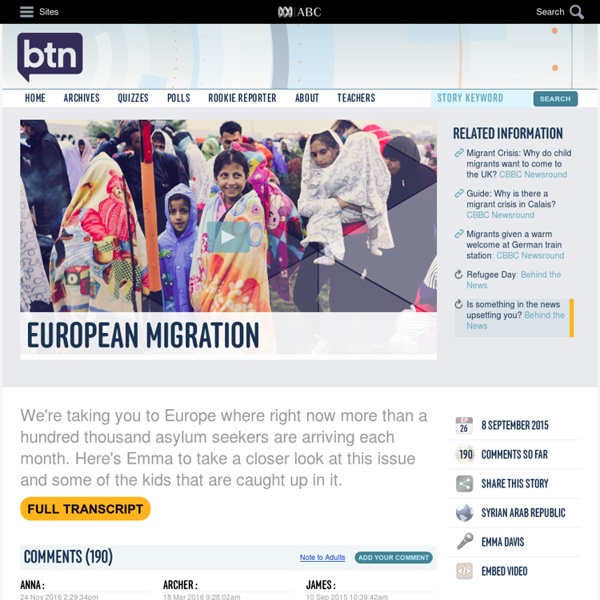 We're taking you to Europe where right now more than a hundred thousand asylum seekers are arriving each month. Here's Emma to take a closer look at this issue and some of the kids that are caught up in it. EMMA DAVIS, REPORTER: This sight is becoming very common in a lot of European countries. Tens of thousands of asylum seekers, travelling across borders, desperate for a new home. 15-year old Jehad is one of them. JEHAD: I remember my cousin, my grandmother, grandfather and all my people from my family. Since January, more than 300 thousand people have risked their lives trying to cross the Mediterranean Sea to get to Europe. They travel to the coast and many pay people smugglers to take them across the sea. JEHAD: It was scary, it was so scary. Jehad says the boat he travelled on was basically just an inflatable raft. JEHAD: It's a small boat. The paper Jehad's talking about is a special document that allows refugees to travel in Europe. JEHAD: We need clothes. Related:  On the Run - refugees

CRITICAL ANALYSIS OF W.H AUDEN'S 'REFUGEE BLUES’ Put in simple terms, this is a poem about the plight of a specific group of refugees displaced and arriving in a country that is generally hostile to their situation, even if well-meaning. Written in 1939, Auden focuses on the German Jews arriving in the UK at that time, though the poem has taken in a timeless quality due to the commonality of its subject. Indeed, it is not until stanza 8 that Auden identifies his Refugees. Possibly he is trying to show the reluctance of the persecuted to identify themselves for fear of further persecution, possibly he is allowing the narrator –we assume a husband – to present the key ideas of his poem without the idea of Jewishness in some way getting in the way of a universal message. He has chosen the title Refugee Blues to link to the protest and subculture of the enslaved Blacks, who developed this musical form in the Southern USA, and has written a poem in which the rhythm and rhyme scheme (AAB) reflects the musical style. Jonathan Peel SGS 2012

Why people are fleeing Syria: a brief, simple explanation With the refugee crisis worsening as many Syrians attempt to flee to Europe, many people may find themselves wondering just how the war in that country got so bad, and why so many are fleeing now. Here, then, is a very brief history of the war, written so that anyone can understand it: Syria is a relatively new country: Its borders were constructed by European powers in the 1920s, mashing together several ethnic and religious groups. Since late 1970, a family from one of those smaller groups — the Assads, who are Shia Alawites — have ruled the country in a brutal dictatorship. Bashar al-Assad has been in power since 2000. This regime appeared stable, but when Arab Spring protests began in 2011, it turned out not to be. On March 18, Syrian security forces opened fire on peaceful protestors in the southern city of Deraa, killing three. Perhaps inevitably, Syrians took up arms to defend themselves. It worked. By 2014, Syria was divided between government, rebel, ISIS, and Kurdish forces.

Refugees welcome | Playlist Now playing Today's refugee crisis is the biggest since World War II, and it's growing. When this talk was given, 50 million people had been forcefully displaced from their homes by conflict and war; now, a year later, the number is 60 million. There were 3 million Syrian refugees in 2014; now there are 4 million. The Good Lie – Official Movie Site – Trailer, Film Synopsis –Own it now on Digital HD or Blu-rayTM Go Back To Where You Came From | TV Documentary | SBS I'm still fuming! Keep hitting the return button and getting bounced! OK, now I AM calm.... The "Moderator" of this assault on our intelligence obviously has social problems it appears. HOWEVER for anyone unemotionally looking at the increasing severity of the world's problems being driven primarily by the one point the "Moderator" kept closed by a stupid extreme-leftist remark about the lady's statement of Islam being the world's great problem IS THE PROBLEM. Not just for Australia, but the civilised world. There is absolutely no difference whatsoever between Hitler's Fascism and Mohammedanism. They were both Hell-bent on destroying the world using any means possible. ALL OVER THE WORLD Wherever they gather even in smaller numbers, MUSLIMS are utterly bound by their belief to destroy the civilised world and replace it with the literally sick belief system of Sharia. REMEMBER AUSTRALIANS: The Cronulla Incident - the first attempt to impose the sick controls of Sharia on our beaches.

Welcome (2009 film) Welcome is a 2009 French film directed by Philippe Lioret. It stars Vincent Lindon and features Firat Ayverdi and Derya Ayverdi in their inaugural roles. The film was released on 11 March 2009 in France. The film tells the story of Simon Calmat (Vincent Lindon), a French swimming coach who is divorcing his wife Marion (Audrey Dana). The film became hugely popular with audiences in France alone reaching 780,000 in just 3 weeks on screen. On 25 November 2009, the film won the Lux Prize from the European Parliament.[4] Other awards: Welcome at the Internet Movie Database

EU migrant crisis: What we know about Syrian refugee boys Aylan and Galip Kurdi The Turkish smuggler who owned the boat is believed to have abandoned it when the sea became rough, leaving the passengers struggling to control it for an hour before it overturned. The boys’ father, Abdullah, was one of the few survivors. He was in the sea for three hours before he was rescued by the Greek coastguard. He tried to hold onto his family but one by one they were washed from his grasp. Where had they come from? The Kurdi family, who are ethnic Kurds, had fled the conflict in Syria, where they lived in the war-torn town of Kobane. Mustafa Ebdi, a journalist in Kobane, said the family, whose surname he said was Shenu, had been displaced several times by the Assad regime's war with the Islamic State of Iraq and the Levant. He said: "They left Damascus in 2012 and headed to Aleppo, and when clashes happened there, they moved to Kobane. Aylan Kurdi, 3, (L) and his brother Galip, 5, who drowned along with their mother Where were they going? What happens now?

Trying to follow what is going on in Syria and why? This comic will get you there in 5 minutes. That warning has become a global alert. Since the uprising against Assad in March 2011, over 240,000 people have been killed, 4 million Syrians have fled their country, and over 7 million have been displaced. The headlines are full of the heartbreaking stories of these refugees — including young children — who have died trying to reach safety in other countries. The story of these refugees is deeply tied to the effects of climate change. "We are experiencing a surprising uptick in global insecurity ... partially due to our inability to manage climate stress." What's happening in Syria and across Europe is part of a larger story that affects us all.

Related:
Related:  On the Run - refugees