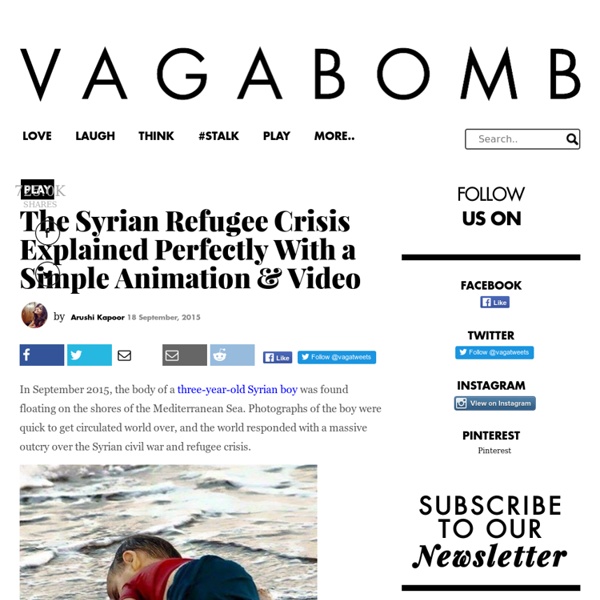 In September 2015, the body of a three-year-old Syrian boy was found floating on the shores of the Mediterranean Sea. Photographs of the boy were quick to get circulated world over, and the world responded with a massive outcry over the Syrian civil war and refugee crisis. This was the first time the Syrian crisis was globally recognised as a burning issue, and one that needs to be addressed with utmost urgency. This video, by In a Nutshell , speaks about how the Syrian crisis is an international issue, and how it all started with countrywide unrest and the civil war in Syria. Watch this video to get a better understanding of the larger Syrian issue and learn about what measures we can take to offer help to the affected people. Video created by In a Nutshell . Related:  ENA4 Yhteiskunta ja ympäröivä maailma

Migrant crisis: Finland's case against immigration Image copyright AFP/Getty Images As EU member states consider whether to accept an increase in the number of asylum seekers they take in, particularly from Syria, they each face a vibrant internal discussion on how to respond to the challenges of immigration. The BBC news website looks at the debate in Finland, where the difference between opinions is clearly defined, even within the government. Last week, Finland's government said it was willing to double the number of refugees it was willing to accept this year, up to 30,000 from 15,000. Only 3,600 applications were made last year - and so far this year, most applications were from Iraq and Somalia. Some may even find themselves living with Prime Minister Juha Sipila, who said on Saturday that he was willing to give up one of his houses to migrants. Image copyright Reuters Mr Sipila has said he feels Finland, a country of 5.5m people, should set an example to the rest of Europe on migration. Integration problems? Image copyright Facebook

Phrasal verbs While You Were Sleeping: Reported Speech This a very funny scene. Your students will enjoy it a lot. Tell me if you like it or give suggestions by leaving a comment, please. Before you watch the segment:Talk to a partner about the following situations. 1) What would you do if you saw someone falling on the subway tracks? 2) If you saved someone's life, would you expect a financial reward? 3) Would you hide a secret in order not to hurt a stranger's feelings? Now watch the movie segment and decide who said each of the following lines:Lucy (Sandra Bullock) A Doctor A Nurse A Police Officer1) Will you marry me? 2) Are you okay? 3) There’s a train coming and it’s fast 4) Are you family? 5) She’s his fiancee 6) I need to ask you a few questions 7) He is in a coma 8) He was pushed from the platform at the train station 9) She jumped on the tracks 10) She saved his life. _____________________________ Now rewrite the sentences, using reported speech: EX: 1) Lucy asked if he would marry her. 2) Lucy asked if he was okay.

If It Were My Home UN Women - Find your inner womens right activist Unity Dow Unity Dow was the first female High Court judge in Botswana. She was a plaintiff in a historic case that allowed children of Botswanan women and foreign men to be considered Botswanan. Unity was also one of three judges who decided on the internationally known Kgalandi court decision, concerning the rights of the San people of Botswana to return to their ancestral lands. Vandana Shiva Vandana Shiva is an Indian environmental activist and author. Wangari Muta Maathai Wangari Muta Maathai is the founder of the Green Belt Movement, an indigenous grass-roots organization that focuses on planting trees to replenish the environment and improve the quality of life for women. Shirin Ebadi Shirin Ebadi is a former judge and human rights activist, and is also the founder of the Defenders of Human Rights Center in Iran, which focuses on the rights of women, children and refugees. Tawakkol Karman Tawakkol Karman is a journalist, politician and human rights activist. Simone de Beauvoir Mafalda

A tale of two brothers | LearnEnglish Teens | British Council Lesbos, Greece Ali, 17 years old: I’m on my own except for my brother. I worry about him a lot. If I didn’t care so much about him, I wouldn’t have brought him with me. Two weeks later Ali and Ahmed reached Germany. Ali: Germany is very beautiful … safe … organised … Braunschweig Children’s Home Ali: I’m not looking for a lot here. This shocking video shows the huge difference in how strangers treat a rich or poor child A video by UNICEF has revealed people's bias against children in poverty when they were presented with the same girl, in different clothes, left unaccompanied on the street. The experiment was carried out in Tbilisi, Georgia. Child actor Anano stood unaccompanied on a main road. For the first half she was dressed in expensive clothing and appeared neat and clean. Picture: UNICEF/Youtube The video shows multiple adults stopping to help her and generally check she is all right. Then UNICEF changed Anano's appearance. When she returned to the street in her new attire, the video shows pedestrians walking by Anano, and most of them pretend not to see her. UNICEF repeated the experiment in a restaurant. When she was dressed like someone living in poverty, people moved their bags closer to them and she was dismissed by customers. The way people treated Anano in the restaurant was so upsetting for her that UNICEFstopped the experiment early. Watch the full video of the experiment here:

When this man complained using Eminem lyrics Asos let him down awfully When your item hasn't been delivered, any old Facebook user can rattle off a clear and concise message of complaint. Jay Whalley from Preston went one better when his blazer wasn't delivered. The complaint, crafted in line to the lyrics of Eminem's Stan, has been shared hundreds of times on Facebook, as has the response that Jay received and subsequently posted. We have no idea what this is from. 2/10 response, if we're honest. HT Mashable

Man's complaint about dead worm in his cucumber escalated hilariously LONDON — The world of Facebook-based customer complaints can sometimes be a strange, wonderful place. Wes Metcalfe's recent post on British supermarket Tesco's wall is a perfect example of this — it started with a dead worm in a cucumber, and somehow ended with Tesco adapting a famous Oasis song to act as tribute for the worm's funeral. But let's back up a step. The whole thing started on Saturday, with the following post. Luckily, Tesco were sympathetic. Then, things escalated. Tesco then took things one step further, with a fittingly adapted Oasis song. Metcalfe swiftly contributed his own song. After the music, it was time for some final reflection. It's not every customer complaint that ends in a virtual funeral for a deceased worm. RIP, William.