Where Are the Syrian Refugees? - Factpod #17 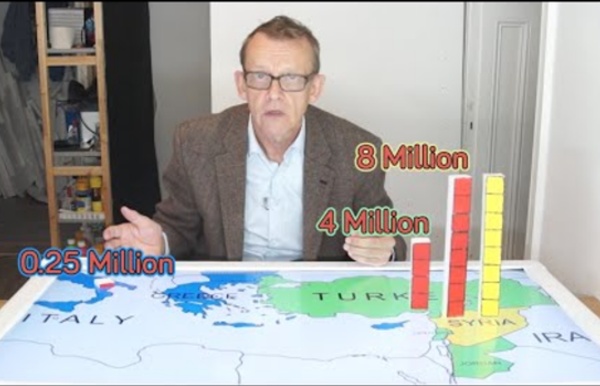 Related:  On the Run - refugees

Map: The walls Europe is building to keep people out After the Berlin Wall fell in 1989, for a while it seemed like border fences and barriers were a thing of the past in Europe. Many on the continent hoped for a new era of integration and receptivity. It didn't happen. Instead, various pressures have led Europe to adopt wall-building projects that would make Donald Trump proud. Right now, in Hungary, for example, the government is rushing to complete a 109-mile-long barbed wire border fence along its southern frontier with Serbia – a project made bitterly ironic by Hungary's 1989 decision to cut its border fence with Austria and help break the Iron Curtain. "We have only recently taken down walls in Europe," European Union spokeswoman Natasha Bertaud said when news of the fence spread in June. The Hungarian government hopes this new fence will stem the flow of migrants and refugees traveling through Hungary on what has been referred to as the West Balkans route. The walls going up in Europe aren't all about migrants and refugees.

Welcome to Space Math @ NASA ! This page contains a complete collection of books and other Space Math products in PDF format, which are available to download. Note the large file sizes! Also, these documents are full-color, and contain additional explanatory materials about the content and how the topics align with national mathematics and science standards identified by the National Council of Teachers of Mathematics and the National Science Teachers Association. These books include most of the weekly math problems assembled by year or by special topic area, in a format that may be more convenient for the teacher than the individual weekly problem downloads. All books contain problems for a mixture of grade levels from 4th through 8th and beyond. The links below take you to the PDF files. Annual Math Problem Collections Space Math IX (2013)106 Problems - This book includes the weekly math problems (Year9 - 479 to 517) and 65 additional problems from individual NASA missions, assembled during the 2012-2013 school year.

Singapore PR Process | Singapore PR 96% Success Rate‎ - First Immigrations PR approvals in Singapore is at all time low today, especially since the yearly PR quota has been significantly reduced from 80,000 to 30,000 in 2009/10. Note that there are around 100,000 foreigners who applied for PR every year, meaning less than one-third of the applicants get to be Singapore PR. With high rejection rate of around 70%, it is indeed demoralizing and daunting. And if you were to submit the application yourself, the chances of you falling into the rejection group is very high. So let First Immigrations help you enhance your application so you can be within the 30% approval group. At First Immigrations Pte Ltd, we have 8 years of vast experience in assisting our clients in their application for PR in Singapore. We boast a team of highly experienced consultants who represent clients from across the globe wishing to apply for Singapore PR. At First Immigrations, our sole purpose is to help you and your family achieve Singapore PR with ease.

Trying to follow what is going on in Syria and why? This comic will get you there in 5 minutes. That warning has become a global alert. Since the uprising against Assad in March 2011, over 240,000 people have been killed, 4 million Syrians have fled their country, and over 7 million have been displaced. The headlines are full of the heartbreaking stories of these refugees — including young children — who have died trying to reach safety in other countries. "We are experiencing a surprising uptick in global insecurity ... partially due to our inability to manage climate stress." What's happening in Syria and across Europe is part of a larger story that affects us all.

Refugees - Cinema - History - Information - Lesson plans - Novels - Statistics - Videos - Vocabulary As Many as 50 Migrants Found Dead in a Truck in Austria - Text + Audio - 27 August 2015 (learningenglish.voanews.com) Migrant crisis: Grim find of bodies in Austria lorry - Article + Photos + Video - 27 August 2015 "The bodies of between 20 and 50 migrants have been found in a lorry abandoned in a motorway lay-by near the Austrian border with Hungary, authorities say." (BBC) Senegal migrant town Tambacounda mourns its lost sons - 27 August 2015 "People in one of Senegal's poorest areas are in mourning after dozens of their loved ones lost their lives in shipwrecks off the Libyan coast as they tried to make the treacherous journey to Europe. The BBC's Laeila Adjovi visited them." (BBC) UK net migration hits record high - VIDEO - 27 August 2015 "Net migration to the UK is at an all-time high, reaching 330,000 in the year to March, the Office for National Statistics has said.

Algebra I - UTeach Austin: PBI The following projects were created by UTeach PBI students following content guidelines of either the second or fifth 6th weeks of the Austin Independent School District's scope and sequence. *** Design a neighborhood: The students will be working in groups throughout a four-week PBI unit centered around designing a block for a new neighborhood being built in a city. In the final artifact the students will create a blueprint design of a block of this new neighborhood, consisting of four buildings. *** Car Trip: The students are planning for a senior road trip to five different cities across the United States. *** Fun Vacation: The goal of the project is to plan financially for an international trip. *** Light bulbs good for the environment or your wallet? *** Let's Make Some Money!

How To Apply for Singapore PR | How to Get Singapore PR | Singapore PR Process Our consultants will screen and assess your profile before determining your PR success rate! We will guide you through every single step so you will be at ease with the PR application process! With us, we ensure that your PR application will be a smooth and hassle-free one. Step 1: Our consultants will advise you on when is the right time to apply for Singapore PR Employment pass holders can start applying for PR on the day you start working in Singapore. One mandatory requirement is to submit six months’ pay slips as part of the application process. How soon you can start applying for PR is also dependent on the employment pass type that you are holding as well as the unannounced quota set by Singapore government. Step 2: We will access your PR application approval rate Factors that are being accessed by ICA when reviewing your PR application include: Step 3: Consider whether to apply PR for your children The usual time to wait before your e-appointment date is about 5-6 months.

Shame On Europe Thousands of child refugees have arrived in Europe alone without any parents or relatives to look after them. Exhausted and terrified, many are in danger of being abused by criminals. We believe the government must offer 3,000 of them a safe home in Britain. Take action now if you agree. Last year 26,000 children arrived in Europe on their own - leaving them incredibly vulnerable. We're asking the government to give a home to 3,000 children who are travelling alone. So far it has offered to accept thousands of Syrian refugees. It's also said that it will do much more to help child refugees - especially those who are alone in Europe and in conflict zones. This is a welcome step in the right direction and we'll be watching carefully to make sure that it follows through on what it has said. We will also continue to call on the government to urgently take in 3,000 lone children - and we need your help. 1. 2. 3. 4. 5. Read the five point plan in full.

In 1 tweet, J.K. Rowling captured the media's hypocrisy in how it treats Syrian refugees. J.K. Rowling is heartsick over how the thousands of Middle Eastern refugees flooding into Europe are being treated. So when The Daily Express published an article about the major humanitarian crisis on the bottom of their front page, Rowling took them to task. Specifically, for the prominent placement of a different story about a dog looking for a home. Of course, Rowling wasn't suggesting that people shouldn't care about homeless dogs. Photo via dudwnhahaha. There are many unsheltered animals that need loving homes, and it's completely understandable — and admirable — to feel for them and want them to be safe. And dogs are, without a doubt, very cute. But the tweet reflects a growing frustration that, while one dog needing a home is sad, there are thousands of people who need homes — and not enough is being done about it. Photo by Philippe Huguen/Getty Images. At Upworthy, we tell stories for a better world.Like us on Facebook to get them first: There is hope, however. Photo by Andreas Tille.

Density of Pennies Prelab activity Procedure Since you have five {*style:<a href='javascript:def('/Glossary/glossaryterm.aspx? x 100 Conclusions Europe's Migrant Crisis Introduction Migrants and refugees streaming into Europe from Africa, the Middle East, and South Asia have presented European leaders and policymakers with their greatest challenge since the debt crisis. The International Organization for Migration calls Europe the most dangerous destination for irregular migration in the world, and the Mediterranean the world's most dangerous border crossing. Where do these migrants and refugees come from? Political upheaval in the Middle East, Africa, and South Asia is reshaping migration trends in Europe. The IOM estimates that more than 464,000 migrants have crossed into Europe by sea for the first nine months of 2015. What’s the difference between a migrant and refugee? Distinguishing migrants from asylum seekers and refugees is not always a clear-cut process, yet it is a crucial designation because these groups are entitled to different levels of assistance and protection under international law. Which EU member states are on the frontlines? Reuters

Related:
Related:  On the Run - refugees