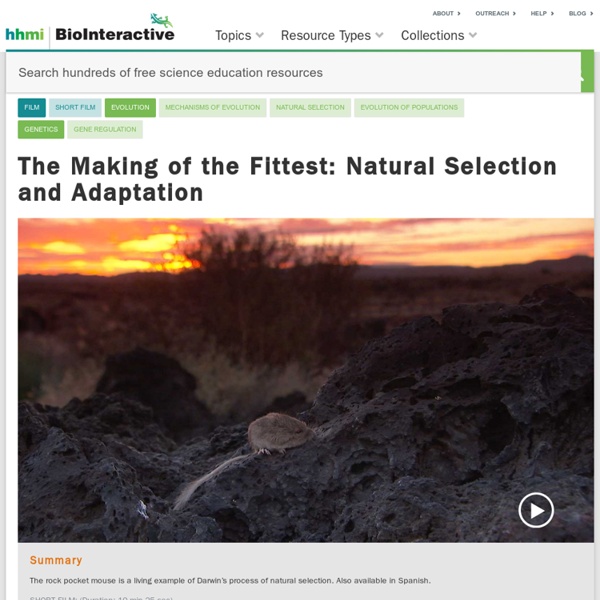 Evolution: Library: Evolution of Camouflage In the insect world things are often not what they seem, especially if you're a hungry predator. For 250 million years, insects have survived because they often appear to be something other than what they really are. Is it a bug, a twig, or a leaf? In the case of orange-and-black butterflies, the viceroy has evolved a striking resemblance to the beautiful but foul-tasting monarch. Sometimes the mimicry is not visual but auditory, as in some harmless flies that emit a sound just like the buzzing of an angry bee or wasp, keeping attackers away. When an insect happens to blend in with its environment, it's called camouflage. In camouflage, the shape and outline of the animal merge with the background so it's not recognizable. Some creatures even change color to blend with new surroundings, like the crab spider that changes from white to yellow when it moves from daisies to goldenrod in the summer.

Evolution: Library: Tale of the Peacock At a singles cocktail party, the ending is often predictable. A female may choose a male from several because he is attractive. But why does she think he is good looking? Scientists, stumped by that question throughout the animal kingdom, hypothesized that something more than chemistry drives mate choice. Looks are certainly important for the peacock, with his absurdly bright, burdensome train that he shows off to attract a female. Peahens often choose males for the quality of their trains -- the quantity, size, and distribution of the colorful eyespots. This way of choosing a mate is just one type of sexual selection: members of one sex mating in disproportionate numbers with members of the opposite sex that possess some "showy" feature. But bigger is only better up to a point.

Teaching Evolution through Human Examples The "Teaching Evolution through Human Examples" (TEtHE) three-year exploratory research and development project was funded by National Science Foundation Discovery Research K-12 grant #1119468. The project has created four curriculum units for Advanced Placement (AP) Biology classes, aligned to the learning objectives, using human case studies to teach core evolutionary principles. The curriculum units are: (1) Adaptation to Altitude, (2) Malaria, (3) Evolution of Human Skin Color, and (4) What Does It Mean To Be Human?. All of our resources are downloadable here for free! Click on this link: bit.ly/TeachHumanEvolution (link is external) You can also read online (link is external) or download (link is external) a research article in Evolution: Education and Outreach published in April 2018 about the effectiveness of these materials. What Does It Mean to be Human? Description: Contents: Activity 1 feedback: Activity 2 feedback:

Are we ready for neo-evolution? - Harvey Fineberg Theodosius Grygorovych Dobzhansky was a prominent geneticist and evolutionary biologist, and a central figure in the field of evolutionary biology for his work in shaping the unifying modern evolutionary synthesis. Antonio Damasio's research in neuroscience has shown that emotions play a central role in social cognition and decision-making. His work has had a major influence on current understanding of the neural systems, which underlie memory, language, consciousness. Listen to his TED talk about the quest to understand consciousness. The Big Bang theory is an effort to explain what happened at the very beginning of our universe. Evolution is the change in the inherited characteristics of biological populations over successive generations. The Human Genome Project (HGP) was one of the great feats of exploration in history — an international research effort to sequence and map all of the genes - together known as the genome - of members of our species, Homo sapiens.